WASHINGTON — The first time defenders of Donald J. Trump came for Representative Liz Cheney, for the offense of having voted to impeach him, fellow Republicans closed ranks to save her leadership post, with Representative Kevin McCarthy boasting that their “big tent” party had enough room for both the former president and a stalwart critic.

Just three months after she beat back a no-confidence vote by lopsided margins, Ms. Cheney of Wyoming, the No. 3 House Republican, is facing a far more potent challenge that appears increasingly likely to end in her ouster from leadership. This time, Mr. McCarthy, the minority leader, is encouraging the effort to replace her.

Her transgression, colleagues say: Ms. Cheney’s continued public criticism of Mr. Trump, her denunciation of his lies about a stolen election and her demands that the G.O.P. tell the truth about how his supporters assaulted democracy during the Jan. 6 riot at the Capitol.

The turnabout reflects anew the passion with which Republicans have embraced Mr. Trump and the voters who revere him, and how willing many in the party are to perpetuate — or at least tolerate — falsehoods about the 2020 election that he has continued to spread.

What began as a battle over the party’s future after the violent end to the Trump presidency has collapsed into a one-sided pile-on by Team Trump, with critics like Ms. Cheney, the scion of a storied Republican family and the lone woman in her party’s House leadership, ostracized or moving toward the exits.

The latest test for Ms. Cheney could come as soon as next week, when a growing group of Republicans is planning a fresh bid to dethrone her, with Mr. McCarthy’s blessing. Many of her colleagues are now so confident that it will succeed that they are openly discussing who will replace Ms. Cheney.

The tensions escalated on Tuesday, when Mr. McCarthy went on Mr. Trump’s favorite news program, “Fox & Friends,” to question whether Ms. Cheney could effectively carry out her role as the party’s top messenger. (Beforehand, he told a Fox reporter, “I’ve had it with her,” and “I’ve lost confidence,” according to a leaked recording of the exchange published by Axios.)

“I have heard from members concerned about her ability to carry out the job as conference chair, to carry out the message,” Mr. McCarthy said during the portion of the interview that aired. “We all need to be working as one, if we’re able to win the majority.”

With onetime allies closing in, Ms. Cheney, known for her steely temperament, has only dug in harder. Minutes after Mr. McCarthy’s TV hit, she sent her barbed reply through a spokesman, effectively suggesting that the minority leader and Republicans moving against her were complicit in Mr. Trump’s dissembling.

“This is about whether the Republican Party is going to perpetuate lies about the 2020 election and attempt to whitewash what happened on Jan. 6,” said Jeremy Adler, the spokesman. “Liz will not do that. That is the issue.”

One of the few Republican voices willing to rise to Ms. Cheney’s defense was Senator Mitt Romney of Utah, who has himself come under attack from his party for his unrepentant criticism of Mr. Trump — even getting booed at the Utah Republican Party convention on Saturday.

“Every person of conscience draws a line beyond which they will not go: Liz Cheney refuses to lie,” Mr. Romney wrote on Twitter. “As one of my Republican Senate colleagues said to me following my impeachment vote: ‘I wouldn’t want to be a member of a group that punished someone for following their conscience.’”

Many House Republicans insist they have no problem with Ms. Cheney’s vote to impeach Mr. Trump, which she described as a vote of conscience. Nor, they say, are they bothered by her neoconservative policy positions, which skew — like those of her father, former Vice President Dick Cheney — toward a hawkishness that is at odds with the “America First” slant of the party that Mr. Trump cemented.

But they fear that Ms. Cheney’s refusal to stop criticizing Mr. Trump or condemning the events of Jan. 6 could weaken the party’s message going into the 2022 midterm elections, when they hope to portray Democrats as big-government socialists so villainous they should be voted out of the majority. It has also infuriated Mr. Trump.

Many, including Mr. McCarthy, had hoped that after surviving the February vote of no confidence, Ms. Cheney, as an elected leader, would make like the rest of the party and simply move on.

Instead, she has doubled down and at times turned her fire on colleagues. The final straw for many came last week in Orlando, where Republicans gathered for their annual policy retreat in hopes of putting on a show of unity.

Ms. Cheney told Punchbowl News that she would campaign in Wyoming — where she faces a primary challenge — defending her impeachment vote “every day of the week.” She told reporters that any lawmaker who led the bid to invalidate President Biden’s electoral victory in Congress should be disqualified from running for president. And she broke with leading Republicans when she said a proposed independent commission to investigate the Jan. 6 riot should focus on the attack on the Capitol by a pro-Trump mob, rather than scrutinizing violence by antifa and Black Lives Matter, as Mr. McCarthy and other Republicans have demanded. 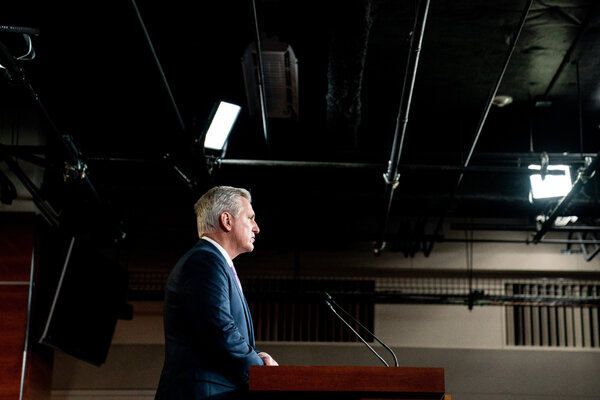 A few days later, she drew attacks from the right for fist-bumping Mr. Biden at his speech before a joint session of Congress, and took to Twitter to defend herself for greeting the president “in a civil, respectful & dignified way.”

On Monday, after Mr. Trump issued a statement calling the 2020 election “fraudulent” and “THE BIG LIE,” Ms. Cheney quickly tweeted her rebuttal, writing that anyone who made such claims was “poisoning our democratic system.”

Some Republicans privately likened her performance to picking at a scab, and many of Mr. Trump’s allies saw it as an opening to try again to depose her.

“Liz has attempted (is FAILING badly) to divide our party,” Representative Lance Gooden, Republican of Texas, wrote on Twitter on Tuesday, emulating Mr. Trump’s caustic Twitter style. “Trump is still the LEADER of the GOP, Liz! I look forward to her being removed SOON!”

Ms. Cheney’s troubles chart a rapid shift for the Republican Party in the few months since Mr. Trump left Washington. Early on, she was part of a small but influential group of Republicans that included Senator Mitch McConnell of Kentucky, the minority leader, and condemned Mr. Trump’s role in stoking the riot with false claims of a stolen election. But many of those lawmakers have since gone quiet, leaving Ms. Cheney, who once was enthusiastically spoken of as a future speaker or president, isolated.

Ms. Cheney declined through a spokesman to comment, and several of her allies in the House would not speak on the record in her defense, underscoring the fraught nature of the vote and the pessimism some of them feel about her chances of surviving another challenge. A spokeswoman for Representative Adam Kinzinger of Illinois, another Republican who voted to impeach Mr. Trump and has been a leading critic of the former president, said in a statement that the congressman “unequivocally supports Liz Cheney for conference chair.”

Those who know her best say privately that the Ms. Cheney’s predicament reflects both her principles and her personality, including a stubborn streak that sometimes prompts her to act against her self-interest. One ally who has been exasperated by her in recent months described her actions as classic Liz Cheney: She will always do what she thinks is right, the Republican said on Tuesday, but she will just never stop to think she’s wrong.

With Ms. Cheney hemorrhaging support, Republicans have already begun cycling through names of possible replacements for a post traditionally seen as a steppingstone to the top party positions. Mindful of the optics of replacing the only woman in leadership with another man, Republicans are eyeing choosing a woman.

The leading contender appears to be Representative Elise Stefanik of New York, a rising star in her fourth term who has long toiled to increase the number of women in the Republican ranks and has more recently become a fierce defender of Mr. Trump.

Ms. Stefanik, 36, has begun reaching out to Republican lawmakers to gauge their support, according to two people familiar with the private conversations, and by Tuesday evening, one of her political aides was retweeting speculation that she would “make an outstanding conference chair.”

Representative Guy Reschenthaler of Pennsylvania, a member of the Republican leadership who initially whipped votes for Ms. Cheney, said that he was counting potential votes for Ms. Stefanik and believed the job would be hers if she ran.

Republicans have also floated Representative Jackie Walorski of Indiana as a possible alternative. As the top Republican on the Ethics Committee, Ms. Walorski this year successfully balanced the job of condemning Representative Marjorie Taylor Greene’s past conspiratorial statements while arguing she should not be kicked off her committees.