The European Commission said the tech giant was in breach of its rules by charging high commission fees in its App Store and preventing app developers from advertising alternative ways to subscribe to their services. The charge relates to a complaint filed two years ago by streaming service Spotify. Responding to the accusations, Apple accused the Commission of being anticompetitive by handing the music streaming firm an upper hand.

She told a news conference in Brussels: “We are concerned that Apple’s rules negatively impact its rivals by raising their costs, reducing their profit margins as well as their attractiveness on the Apple platform.”

The top eurocrat called on Apple to drop its anticompetitive practices but did not set out what fixes the firm should implement.

Brussels will contact regulators in the US, Australia and the Netherlands over similar cases, she added. 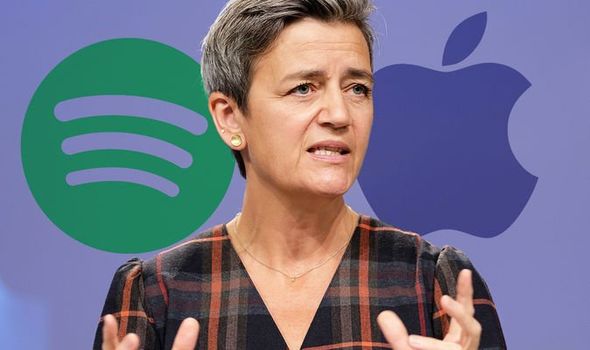 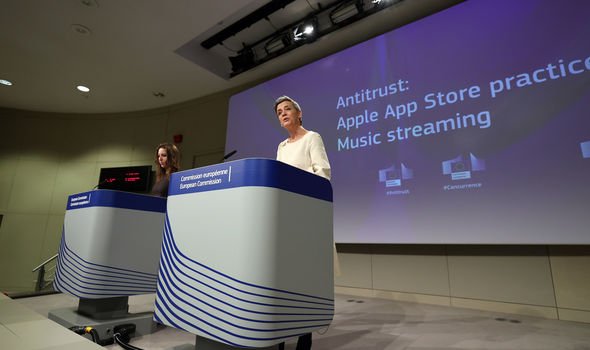 Apple imposes a strict set of rules on developers seeking to sell their applications on the firm’s App Store, the only official way to reach the world’s one billion iPhones.

Producers also have to pay up to 30 percent commission for the privilege of hosting their app on the firm’s official platform.

Apple says the procedures are designed to ensure quality.

A statement from the EU’s executive said: “The Commission’s preliminary view is that Apple’s rules distort competition in the market for music streaming services by raising the costs of competing music streaming app developers. 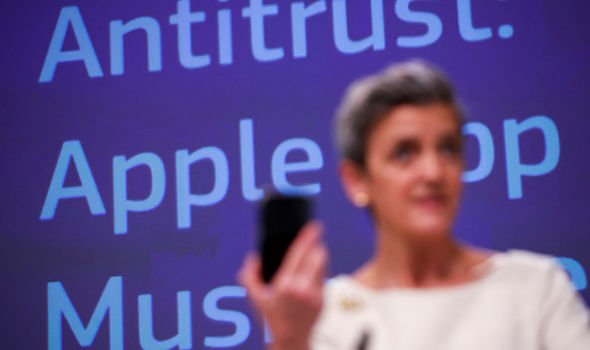 “This in turn leads to high prices for consumers for their in-app music subscription on iOS devices. In addition, Apple becomes the intermediary for all in-app purchases transactions and takes over the billing relationship as well as related communications for competitors.”

The case comes as yet another high profile attempt by Brussels to take on global tech giants and is the first time eurocrats have made formal charges against Apple.

It is expected to take years before the EU’s top court in Luxembourg reaches any verdict, which Apple are likely to appeal.

If found guilty of breaching EU rules, Apple could face a fine of up to 10 percent of its global turnover. 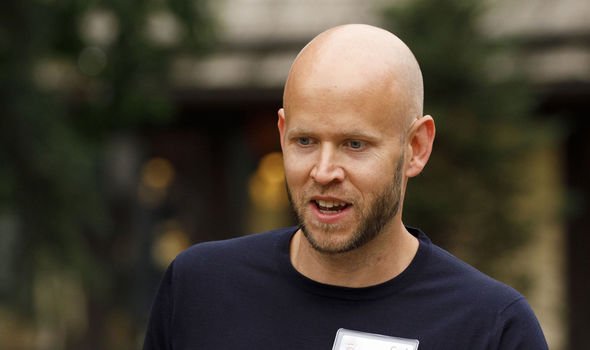 It turned over More than £198 billion last year, according to the latest published figures.

“Fairness is the key to competition. We are one step closer to creating a level playing field, which is so important for the entire ecosystem of European developers.”

Apple hit back at the accusations, claiming Spotify enjoys largely free access to its App Store.

The iPhone maker said: “Spotify has become the largest music subscription service in the world, and we’re proud for the role we played in that.

“Spotify does not pay Apple any commission on over 99 percent of their subscribers, and only pays a 15 percent commission on those remaining subscribers that they acquired through the App Store.

“At the core of this case is Spotify’s demand they should be able to advertise alternative deals on their iOS app, a practice that no store in the world allows.

“Once again, they want all the benefits of the App Store but don’t think they should have to pay anything for that. The Commission’s argument on Spotify’s behalf is the opposite of fair competition.”