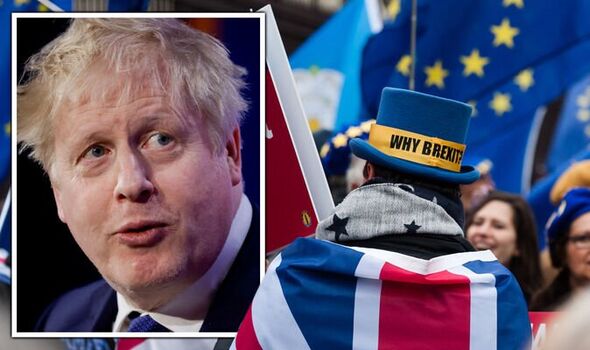 US economist and former member of the Bank of England’s rate setting Monetary Policy Committee, Adam Posen, has reportedly claimed Brexit is “80 percent of the reason” for the UK’s inflation problem. But Economist Julian Jessop has savaged this analysis for not relying on “predictions” rather than “hard facts”. Writing in the Telegraph, he said: “Clearly this makes no sense at all if applied to the current rates of inflation. But Posen was actually referring to International Monetary Fund (IMF) forecasts for 2023, when the UK is expected to suffer the highest inflation in the G7. This is just speculation.” Mr Jessop pointed out that the IMF “has been spectacularly wrong on the UK economy for many years” and that the UK consumer price inflation has not deviated far from the average in Europe so far. “Any Brexit impact on inflation has been dwarfed by other factors – and this is likely to continue,” he added.

An Irish newspaper has warned that Jacob Rees-Mogg’s u-turn on Northern Ireland border checks may be setting the stage for further battles over the NI Protocol.

Mr Rees-Mogg, Cabinet minister for Brexit Opportunities and Government Efficiency, said it would be “wrong” to push ahead with controls on EU goods being imported to Britain.

In a written statement to Parliament, he told MPs the move would save British businesses up to £1billion a year in costs.

While the decision was justified by Mr Rees-Mogg as a way to prevent price rises during the cost of living crisis, the move may contain a “darker purpose”.

The Irish Examiner argued: “The British will now argue that if the UK is not imposing food checks on goods entering from the EU, there is little or no justification for a hardline approach to the border in the Irish Sea.

“That tracks directly back to the Northern Ireland Protocol and its future, about which we will hear much more during next week’s elections in the North.”

Nigel Farage has located a French Naval vessel escorting a dinghy of migrants across English waters.

The GB News host has ventured out to sea to report on the renewed spike in illegal channel crossings.

The Ministry of Defence (MoD) said 254 migrants were detected in seven small boats on Sunday, with more spotted being brought into Dover on Bank Holiday Monday.

Speaking from a boat on the English channel, Mr Farage said: “You can see a French Naval Vessel escorting a dinghy with about 40 on board.

“That French Naval Vessel has escorted it for about a quarter of a mile off the French coast and there are spottings of boats all over the place in the channel.”

He continued: “The French Naval Vessel is now a long way inside English waters.

Good morning from London. I’m Tara Fair, I’ll be bringing you all the latest developments on Brexit. Please feel free to get in touch with me as I work if you have a story or tips to share! Your thoughts are always welcome.