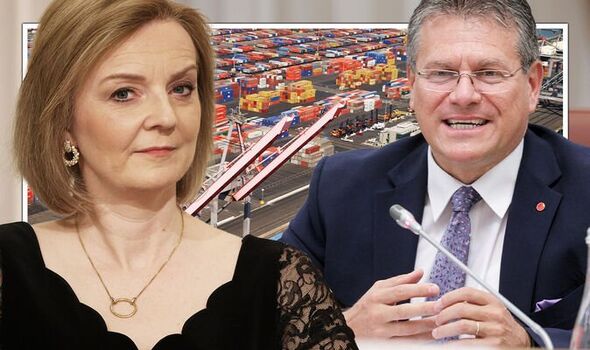 Maros Sefcovic is reportedly set to announce new concessions but has threatened a trade war if the UK refuses to agree a compromise. The Telegraph reported that Mr Sefcovic was willing to agree significant compromises to virtually eliminate all customs and food safety checks between Britain and Northern Ireland, similar to the deal struck with regard to medicines. The apparent olive branch comes despite Brussels also threatening a trade war, should the UK push ahead with the new legislation. In a statement on Tuesday, the EU said: “Should the UK decide to move ahead with a bill disapplying constitutive elements of the Protocol as announced today by the UK Government, the EU will need to respond with all measures at its disposal.”

Boris Johnson is planning to bring in a close ally Conor Burns to be his new Northern Ireland Secretary.

Sources have told Express.co.uk the Prime Minister has “lost patience” with the current Northern Ireland Secretary, Brandon Lewis, who has been partially blamed by many Tory MPs for Sinn Fein becoming the largest party in the Stormont elections earlier this month.

M Burns is a long-term friend and ally of Mr Johnson and currently number two in the Northern Ireland Office.

Ministers are concerned that Liz Truss’s plans to overhaul the 2019 Brexit deal could take as long as a year to implement due to plots to stop new legislation passing through Parliament.

“If Johnson intends to try and override a deal that he himself signed I cannot, as a Conservative, support this in the Lords and I am sure that will be the case with many of my colleagues,” he said.

“But then we don’t have a Conservative government.

“What we have is an English nationalist government with a cult of Johnson.”

The EU has been left in ‘dismay and disbelief’ over the UK’s threat to suspend parts of the Northern Ireland Protocol.

Chief Brexit negotiator Liz Truss outlined plans to introduce legislation to change the protocol and remove parts that place the Good Friday agreement “under strain”. But the proposal hasn’t gone down well with diplomats, with one reportedly calling the proposal “reckless”.

Following the announcement European Commission vice-president Maros Sefcovic warned that the EU would “respond with all measures at its disposal”.

Good morning from London. I’m Tara Fair, I’ll be bringing you all the latest developments on Brexit. Please feel free to get in touch with me as I work if you have a story or tips to share! Your thoughts are always welcome.