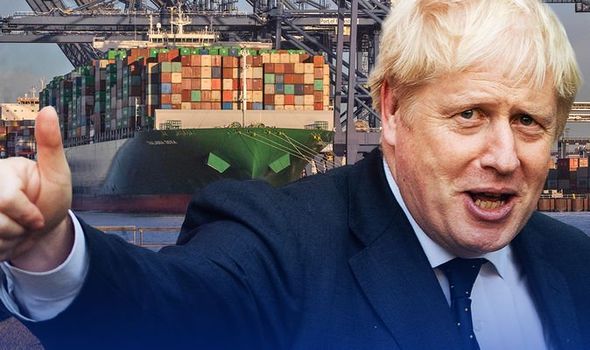 The Prime Minister said the job of making a success of being outside the EU “isn’t finished”. Marking the one-year anniversary of the landmark post-Brexit UK-EU trade agreement Mr Johnson insisted the UK must take advantage of the “enormous potential that our new freedoms bring.” The landmark agreement, which came into effect a year ago on Saturday, is the world’s biggest zero-tariff, zero-quota free trade deal.

It allows businesses in Britain to trade freely with Europe while also being able to seize new trading opportunities with countries around the world. The Prime Minister said: “A year ago today we entered our new relationship with the EU through the world’s biggest ever zero-tariff, zero-quota free trade deal – the UK-EU Trade and Cooperation Agreement.

“That was just the start – our mission since has been to maximise the benefits of Brexit so that we can thrive as a modern, dynamic and independent country. We’ve replaced free movement with a points-based immigration system. We’ve secured the fastest vaccine rollout anywhere in Europe last year by avoiding sluggish EU processes. And from Singapore to Switzerland, we’ve negotiated ambitious free trade deals to boost jobs and investment here at home.

“But that’s not all. From simplifying the EU’s mind-bogglingly complex beer and wine duties to proudly restoring the crown stamp onto the side of pint glasses, we’re cutting back on EU red tape and bureaucracy and restoring common sense to our rulebook.

“The job isn’t finished and we must keep up the momentum. In the year ahead my government will go further and faster to deliver on the promise of Brexit and take advantage of the enormous potential that our new freedoms bring.”

Since the agreement was signed, the Government has sought to capitalise on new freedoms by cutting red tape for businesses, reforming EU rules and regulations and boosting trade abroad to create new jobs here in the UK.

It has allowed the UK to take back control of our borders – replacing freedom of movement with a points-based immigration system. Securing the fastest vaccine rollout in Europe by avoiding cumbersome EU bureaucracy was also made possible because the UK is now operating outside the bloc.

Britain has also been able to strike new free trade deals with over 70 countries, worth over £760 billion, including landmark deals with Australia and New Zealand. From today (Sat) British firms face the introduction of stricter post-Brexit border control checks which will affect businesses importing goods from the European Union.

EU businesses sending goods to Britain will now need to supply full customs declarations while traders will also have to prove that goods are allowed to enter tariff-free under rules of origin requirements.

Additional veterinary checks will come in for food imports in July next year. Full checks between Northern Ireland and Britain have been delayed to allow talks with the EU to continue in a bid to improve the system.

Ireland’s foreign minister has suggested negotiations on the Northern Ireland Protocol need to reach a conclusion by the end of February. He warned that the process cannot “drift on for months”. The protocol is the Brexit deal which prevents a hard Irish border by keeping Northern Ireland inside the EU’s single market for goods.

That also creates a new trade border between NI and the rest of the UK. The UK and EU have since been negotiating potential changes since October but have made limited progress. Mr Coveney said the issues were well understood and that the talks should be wrapped up before campaigning begins for Northern Ireland Assembly elections.

“We all know that we need to bring this discussion and negotiation to an end,” he said. “We have elections in Northern Ireland in May. Those elections will begin in earnest really from the end of February. So this can’t drift on for months.” When the negotiations resume later this month the UK team will be under the control of Foreign Secretary Liz Truss.

She replaces Lord Frost who resigned as Brexit minister and chief negotiator because he disagreed with other areas of government policy.