The proposed American Families Plan would expand access to education and child care. It would be financed partly through higher taxes on the wealthiest Americans. 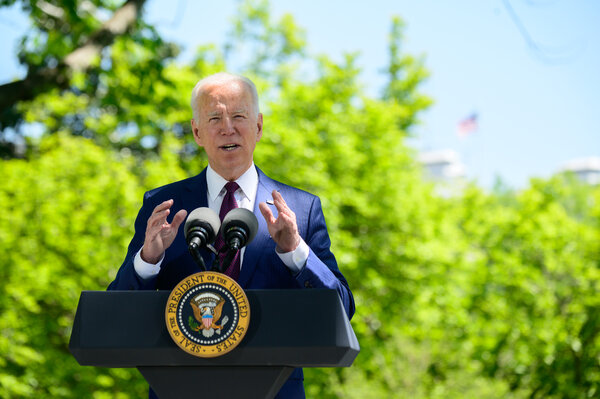 By Jim Tankersley and Dana Goldstein

WASHINGTON — The Biden administration on Wednesday detailed a $1.8 trillion collection of spending increases and tax cuts that seeks to expand access to education, reduce the cost of child care and support women in the work force, financed by additional taxes on high earners.

The American Families Plan, as the White House calls it, follows the $2.3 trillion infrastructure package President Biden introduced last month, bringing his two-part package of economic proposals to just over $4 trillion. He will present the details to a joint session of Congress on Wednesday evening.

The proposal includes $1 trillion in new spending and $800 billion in tax credits, much of which is aimed at expanding access to education and child care. The package includes financing for universal prekindergarten, a federal paid leave program, efforts to make child care more affordable, free community college for all, aid for students at colleges that historically serve nonwhite communities, expanded subsidies under the Affordable Care Act and an extension of new federal efforts to fight poverty.

Administration officials cast the plan as investing in an inclusive economy that would help millions of Americans gain the skills and the work flexibility they need to build middle-class lifestyles. They cited research on the benefits of government spending to help young children learn. In a 15-page briefing document, they said the package would help close racial and gender opportunity gaps across the economy.

Many of the provisions, like tax credits to help families afford child care and a landmark expansion of a tax credit meant to fight child poverty, build on measures in the $1.9 trillion economic rescue plan Mr. Biden signed into law last month. The package would make many of those temporary measures permanent.

But the plan also includes a maze of complicated formulas for who would benefit from certain provisions — and how much of the tab state governments would need to pick up.