As Democrats ponder cutting a $3.5 trillion social safety net bill down to perhaps $2 trillion, a proposal to limit programs to the poor has rekindled a debate on the meaning of government itself. 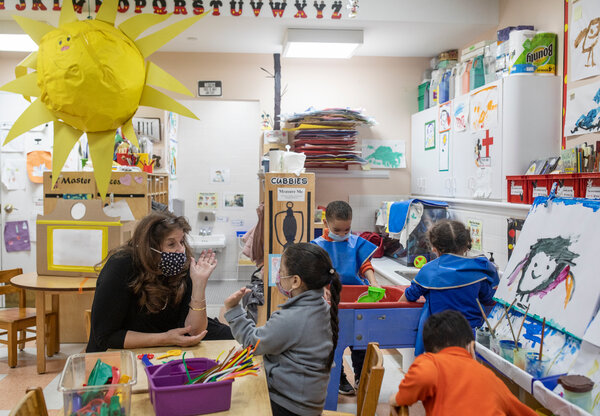 By Jonathan Weisman and Emily Cochrane

WASHINGTON — Senator Joe Manchin III of West Virginia has a ready retort to fellow Democrats who say shrinking the party’s social safety net bill will mean depriving vulnerable populations of critical resources: Limit access to every program in the ambitious measure to only those Americans who need it most.

But Mr. Manchin’s idea holds little appeal for Democrats like Representative Mikie Sherrill, a former Navy helicopter pilot and mother of four whose largely upper middle-class district in New Jersey voted narrowly for Donald J. Trump in 2016, then sent her to the House in 2018 after 34 years of Republican representation.

Last month, Ms. Sherrill successfully amended the House’s version of the Build Back Better Act to do the opposite of what Mr. Manchin is demanding on a centerpiece of the bill: a child care subsidy to help parents get back to work in a pandemic-ravaged economy.

In the original plan, more than $200 billion in child care benefits were limited to families making up to 200 percent of a state’s median income. Ms. Sherrill made the benefit almost universal.

“For my constituents, building a generational new system of affordable child care that will finally help working parents enter the work force, and then excluding them from it will represent a severe blow to their faith in the federal government,” she said.

“New Jersey already pays more than $10 billion in taxes than we receive in federal spending,” Ms. Sherrill added, “and I will not let another federal program pay less to New Jersey tax payers than it does to all other Americans.”

Her position reflects the dilemma Democrats face as they contemplate shrinking 10 years and $3.5 trillion of climate and social safety net programs into a likely size of around $2 trillion. At heart, as they work to unite around President Biden’s signature domestic policy package, Democrats are debating the meaning of government itself, and which citizens should benefit from the taxes almost all of them pay.

They are also clashing over how best to get Americans to embrace an expansion of the safety net. With Republicans routinely bashing them as the party of the rich, Democrats may have a hard time defending a plan that lavishes benefits on the leafy suburbs of Montclair and Chatham, N.J. But they also know that the most popular government programs — and the most stable ones — have been those broadly enjoyed, even by the upper reaches of the middle class, such as Social Security and Medicare.

Liberal Democrats, as well as some from politically competitive districts like Ms. Sherrill’s, argue that the bill’s benefits should be available to everyone. That would mean fewer programs — but more comprehensive ones.

“We don’t ask parents, when they send a child to first grade, how much money they make. We say bring that child in, and we’re going to do the best we can to give her a first-rate education,” Senator Elizabeth Warren, Democrat of Massachusetts, said. She added, “We build roads and bridges without asking who should be allowed to ride on them. We say everyone rides, because it makes us all better off.”