Brexit: UK will 'benefit from control of laws' says Frost

The campaigner, who has been one of the county’s most vocal critics of the UK’s decision to leave the bloc, said it was inevitable Britain would eventually rejoin the EU. The Labour peer said it was “only a matter of time” before a request to return to the single market was submitted.

His comments come after the EU today started legal action against the Westminster Government, accusing it of breaking the terms of the Withdrawal Agreement signed in 2019.

Britain announced earlier this month it was taking unilateral action to suspend the introduction of customs checks on some goods travelling from mainland Britain to Northern Ireland.

The Government said the checks, agreed by the UK and EU under the Northern Ireland Protocol, risked disrupting trade if introduced at the start of next month.

The UK has insisted the measures are temporary and the Protocol will be implemented as full six months later than planned. 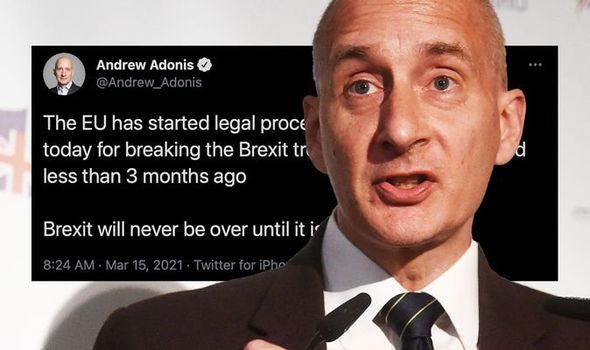 Lord Adonis has seized on the developments claiming they prove Brexit is causing havoc just three months after the end of the transition period.

He wrote on Twitter: “The EU has started legal proceedings against Britain today for breaking the Brexit treaty that Johnson signed less than three months ago.

“Brexit will never be over until it is reversed.”

The European Commission’s vice-president, Maroš Šefčovič, is expected to send two letters to Downing Street today, formally notifying the Government of the start of legal proceedings.

Brussels was outraged at the UK’s unilateral action to extend the grace periods on customs checks.

They accuse Britain of breaking international law by failing to properly implement the Protocol. 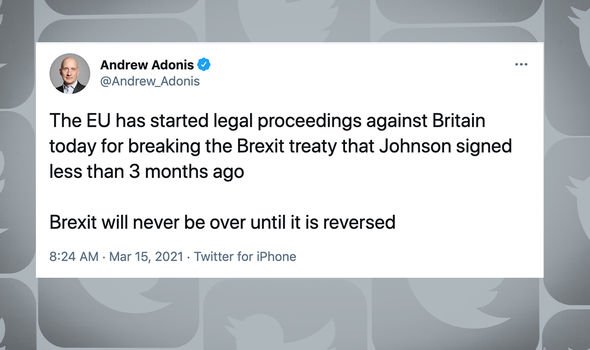 Lord Adonis’s latest criticism of Brexit comes after last Friday he accused the UK’s decision to leave the EU of “wrecking the British economy”.

Figures from the Office of National Statistics indicated exports of UK goods to the EU dropped by 40.7 percent in January, the first month after the end of the Brexit transition period.

Imports from the continent also fell by 28.8 percent over the same period.

However, criticism from the pro-EU Labour Lord was dismissed by Lord Frost who is the minister in charge of the UK’s relationship with Brussels. 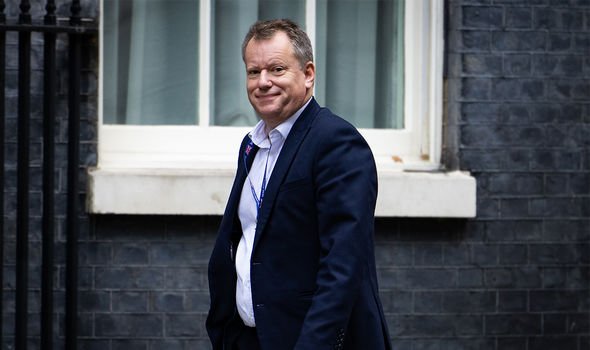 He explained a “unique combination of factors made it inevitable that we would see some unusual figures this January”.

He said: “As well as changes to our trading relationship with the EU, we also saw evidence of stockpiling late last year – as the ONS notes.

“This meant less need to move goods in January.

Lord Frost said the next data would prove trade with the EU was back up to usual levels.