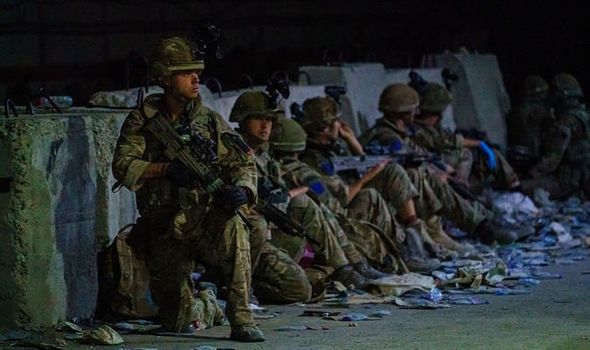 US officials said that at least 11 Marines and a navy medic died, along with at least 60 Afghan civilians, with another 143 reported injured. Last night the new, fanatical ISIS-K group claimed responsibility, sparking fears of a bloody new battle for control of Afghanistan following the Western withdrawal forced by President Biden.

Last night Mr Biden said: “We will not forgive. We will hunt you down and make you pay.”

There were no reports of any UK military or government casualties from the blasts.

The bombings followed warnings picked up by the UK and US intelligence services that a terrorist attack was imminent at the airport.

But warnings for others to stay away from the area had gone unheeded as crowds once again gathered in a desperate bid to flee the country.

The deaths mark the first US military casualties inAfghanistan since February 2020 and the worst US daily loss of life for a decade.

In the first attack, a suicide bomber detonated their explosive vest at the airport’s Baron Hotel, being used as a processing centre for the thousands trying to flee Kabul.

Gunshots rang out immediately after the blast. Some of the injured were seen being rushed away on wheelbarrows.

Moments later, a bomb hidden on a vehicle exploded at the airport’s Abbey Gate, injuring the US soldiers.

Last night ISIS said in a statement that Abdul Rehman Al-Loghri of ISIS-K was the suicide bomber responsible for the blast at Abbey Gate.

The ISIS-K group are bitter rivals of the Taliban.

An Afghan interpreter who has worked with American forces witnessed the bombing at Kabul airport. The man, referred to as “Carl”, described how he helped care for a young girl who later died in his arms.

“I just saw a lot of people got hurt and people that were laying on the ground,” he said.

“I saw a baby there and I went to her and I picked her up. I took her to the hospital, but she died in my hands.” He estimated her age to be around five.

The condemnation of President Biden’s troop withdrawal also continued in the aftermath of the attack, with Former US National Security Adviser, General McMaster, warning the attack was “only the beginning”.

Mr McMaster, who served as a senior US officer in Afghanistan, told BBC News the US had prioritised “getting the hell out of there, regardless of what the consequences will be” and that the attack at Kabul airport was “what happens when you surrender to a terrorist organisation”.

But the situation on the ground in Kabul remained increasingly desperate even before the explosion.

Military experts said the “heinous”attack would inevitably lead to calls for all the British troops to be brought home immediately.

“It’s clearly getting much more dangerous by the hour as evidenced by this most recent attack.”

He added that it was now “clearly a possibility” that the remaining British troops would be brought home earlier than next Tuesday’s deadline.

A Ministry of Defence spokesman confirmed to the Daily Express that around 1,000 military personnel and affiliated staff remained in Kabul, but declined to comment on plans to remove them.

So far more than 12,000 have been flown to the UK, authorities said.

Last night an RAF Voyager aircraft carrying around 250 people landed at RAF Brize Norton in Oxfordshire ‑ with a further 11 flights yesterday ferrying thousands more out of the country.

And with the hours ticking down, troops themselves were also now starting to pack up ahead of Tuesday’s planned mass withdrawal.

With many Afghans facing the prospect of being left behind, the situation for thousands of panic-stricken civilians appeared bleak.

Some sobbing with despair, terrified fathers, mothers, sons and daughters fought to try and secure one of the last ‑ and dwindling ‑ seats on flights out.

Waving paperwork in the air and grasping their bags of belongings, some 10,000 people again crammed the tarmac outside the airport in a desperate final effort to escape the country.

But it is believed many of those gathering will be left behind to fend for themselves, the UK and US authorities now admit.

They include up to 2,000 Afghan translators, related workers and their families who helped British forces during their time in the country.

Musa, 35, one such former supervisor of interpreters for the UK military, said: “If we miss the flights and the airport closes, we could be left to die.

“The Taliban will want their revenge and those who helped the Western forces are their target. I pray this is not us.”

Pleas to those desperate to leave to instead head to the border were also prompting stampedes along roads towards Pakistan.

Thousands fearing Sharia law under Taliban rule made the dangerous journey from their homes.

A video released online showed thousands of people attempting to flee the country via the Pakistan border in the south of the country.

Latest intelligence had rightly predicted that the evacuation operation was now at an extremely dangerous juncture, with warnings of the increased terror risk from jihadists ISIS-K.

Foreign Secretary Dominic Raab, said in a statement: “This evening I called US secretary of state Antony Blinken to express our sorrow that US troops lost their lives in Kabul and that more have been injured.

“They have paid the ultimate sacrifice while helping others reach safety.

“I also want to extend my condolences to the families of all those Afghans killed or injured.

“It is tragic that as they sought safety they have suffered at the hands of terrorists.”

‘My horror at seeing bloodshed’

A man who travelled to Afghanistan to save his family said he won’t sleep after seeing “hundreds” blown up in Kabul, says Abigail Nicholson.

Habib Rahman, 30, who has lived in Toxteth, Liverpool for 15 years, is trying to return with his wife, children and stepbrother.

He was “a few yards” from the airport’s Abbey Gate, one of two suicide bomb blast sites.

He said: “I have seen people passing me, covered in blood.

“I saw hundreds of people blown up. I won’t sleep due to the blood I have seen.”

Habib and his family have minor injuries and are “safe” but are still trying to return to the UK. He added: “We are so desperate, please help.”

The devastating bombing was entirely predictable and our forces were expecting it and prepared.

But suicide attacks are extremely difficult to identify in time to prevent, despite forces being trained to do so.

In Kabul, with throngs of people trying to get into the airport, they are impossible to defend against.

We now know that those claiming responsibility are an off-shoot of Islamic State.

The fact some Taliban fighters were reportedly wounded does not exclude the possibility they could have been involved.

The Taliban leadership may not want to do anything that could give NATO forces second thoughts about pulling out by the end of the month. But that doesn’t mean their fighters on the ground see it the same way.

Many Taliban have poured into Kabul from Helmand with revenge on their minds.

The likelihood of further attacks increases as the deadline for final withdrawal next Tuesday gets closer.

Military commanders, the Prime Minister and Defence Secretary will be considering whether to proceed with the evacuation, adjust the operation or close it down.

Our Armed Forces have handled this volatile and chaotic situation with the utmost professionalism and spirit, risking their lives while desperately trying to get innocent civilians to safety.

It is a shame our political leaders, and especially President Biden, so catastrophically failed them as well as the people of Afghanistan. The humiliation of NATO is complete.