It is a case of steady as she goes for the country’s monetary policy with the central bank’s widely expected decision yesterday to keep the currency’s range of movement unchanged.

Expectations that core inflation will stay low this year were behind the move, although analysts say there is a chance the Monetary Authority of Singapore (MAS) might tighten the policy at its October review.

The decision following its twice-yearly review means the Singdollar’s rate of appreciation will be pegged at 0 per cent per annum of its policy band. The width of the band and the level at which it is centred will also be unchanged.

It came despite core inflation – which excludes accommodation and private road transport costs – turning positive in February for the first time in a year.

The MAS said prospects for global growth have firmed and should support recovery in the Singapore economy, although it added: “Nevertheless, output will still be below potential in 2021.”

It also said that growth this year is likely to top the official 4 per cent to 6 per cent forecast range, barring a setback to the global economy.

Flash data yesterday showed the economy grew by 0.2 per cent year on year in the first quarter, its first expansion since Covid-19 broke out.

Maybank Kim Eng economists Chua Hak Bin and Lee Ju Ye said there is a 30 per cent probability the MAS will tighten policy to a “slight appreciation bias” in October given the risks of inflation and stronger growth recovery.

DBS analysts told Reuters that the MAS’ improved outlook has raised the possibility it could undo some of its easing as soon as October if the economy strengthens.

But Ms Selena Ling, head of treasury research and strategy at OCBC Bank, said: “The policy statement … is more upbeat and watchful, but probably falls short of outright hawkishness that would suggest a tightening (in October) is imminent.” 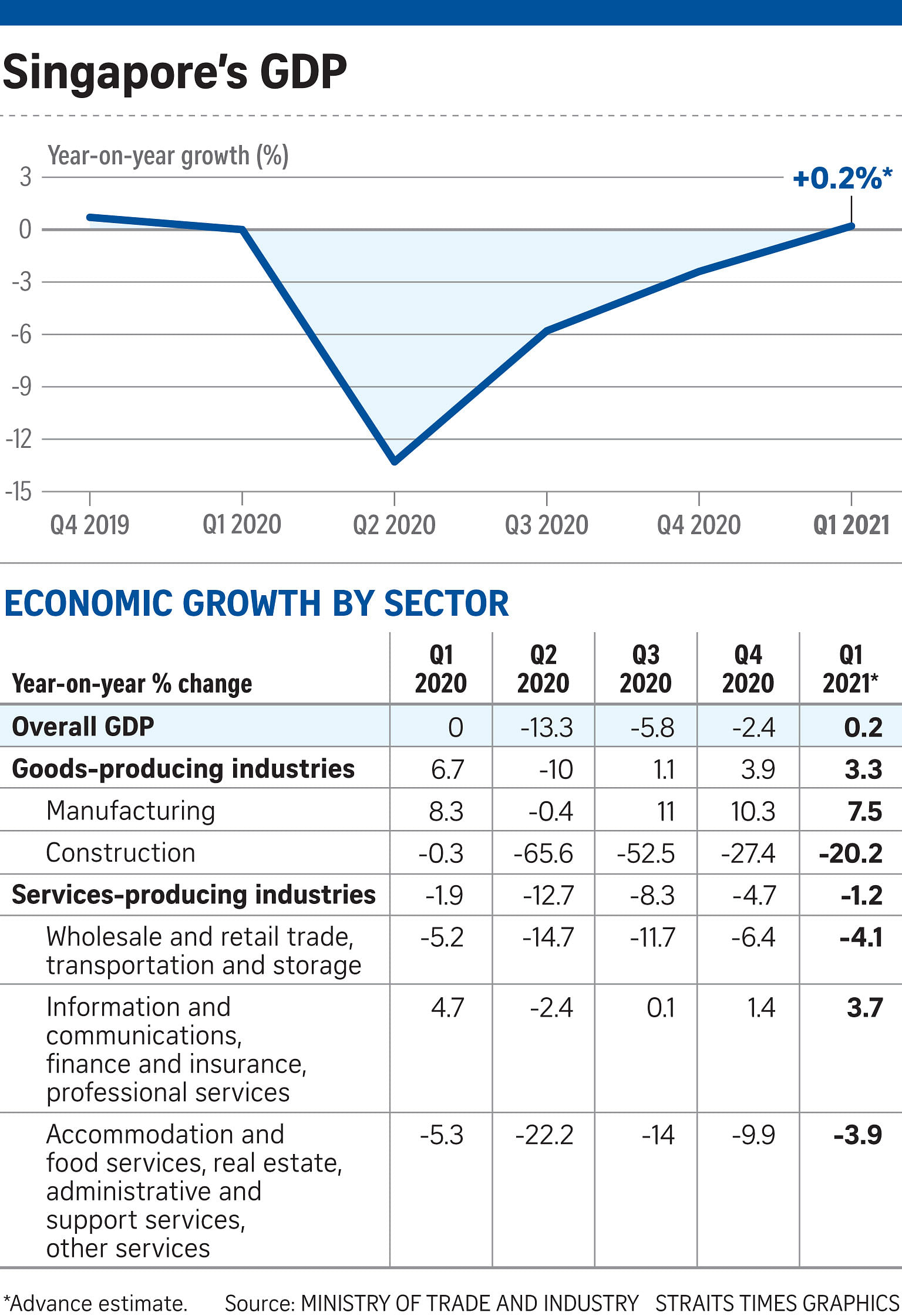 The MAS expects inflation to rise at a more gradual pace in the second half of this year despite “some upside risks to global price pressures”.

Prices of more goods and services are likely to rise as the labour market improves and private consumption recovers, said the MAS.

“However, these would be gradual, in line with subdued wage growth as the slack in the labour market will take time to be fully absorbed,” it said, maintaining its forecast for core inflation at 0 per cent to 1 per cent this year.

OCBC’s Ms Ling said: “Given that the domestic unemployment rates have only recently started stabilising, it is too premature to assume that consumer confidence and private consumption will recover to pre-Covid levels just yet.”

The MAS allows the Singdollar to float within an unspecified band against a trade-weighted basket of currencies of major trading partners. If it goes out of this band, the MAS steps in by buying or selling Singdollars.

It changes monetary policy by adjusting the band based on risks to the country’s growth and inflation.

The MAS took the unprecedented step in March last year to lower the midpoint of its currency band and reduce the slope to zero.

That meant it allowed for a weaker exchange rate to head off deflation and support Singapore’s export-reliant economy as the nation braced itself for a deep recession.