Fitbit and Victor Glemaud are at it again: After debuting a collection of knit watch bands last year for the then-newly launched Fitbit Sense and Versa 3, the pair have joined forces once more on an update that brings two new looks to the devices.

Revealed Monday, the set features Metallic Stripe, a look that places a stripe in the vertical center of the band, and Metallic Ombré, a pattern featuring a cascading effect in transition between black and soft gold. The styles, available in small and large, join the original bands in layered black/red and metallic gold/black for $39.95.

The straps were created as sophisticated takes on gender-neutral design and, with the knit fabrication made of Repreve recycled plastic fibers like last time, the entire collection can make a case for sustainability.

That’s par for the course for the Haitian-American fashion designer. Ever a champion for sustainability and body positivity, Glemaud also approached his latest work with an eye toward inclusivity.

The Cape Makes A Return On The Runway

“I was inspired by the diversity of human appearances, especially skin color,” he said. “These new bands have been designed to reflect a wide variety of skin tones while also accentuating and glowing against the user’s skin with a sensual functionality.

“It’s so important to celebrate individuality and your unique self, and I wanted to create an array of options within this new collaboration for wearers to do just that,” he added.

The ongoing partnership with Fitbit gives Glemaud an opportunity to bring his message to a new audience. For Fitbit, it’s another brick laid in its fashion foundation, which speaks to a strategy that goes back years.

According to a Fitbit spokesperson, “Fitbit has had a longstanding designer collection accessory strategy, launching our first collection in 2014 that led the industry charge to infuse high fashion into technology to help with the widespread adoption of wearables.

“Through our multi-year partnership with the CFDA, we have been committed to supporting emerging designers with a keen eye on style, inclusivity and uplifting our combined communities,” the spokesperson told WWD. “Seven years and 10 collaborations later, we are still committed to offering our users the versatility to style their Fitbit devices with a variety of fashionable accessory options and are excited to continue to offer them designer collections they love that empower them to express their personal style.” 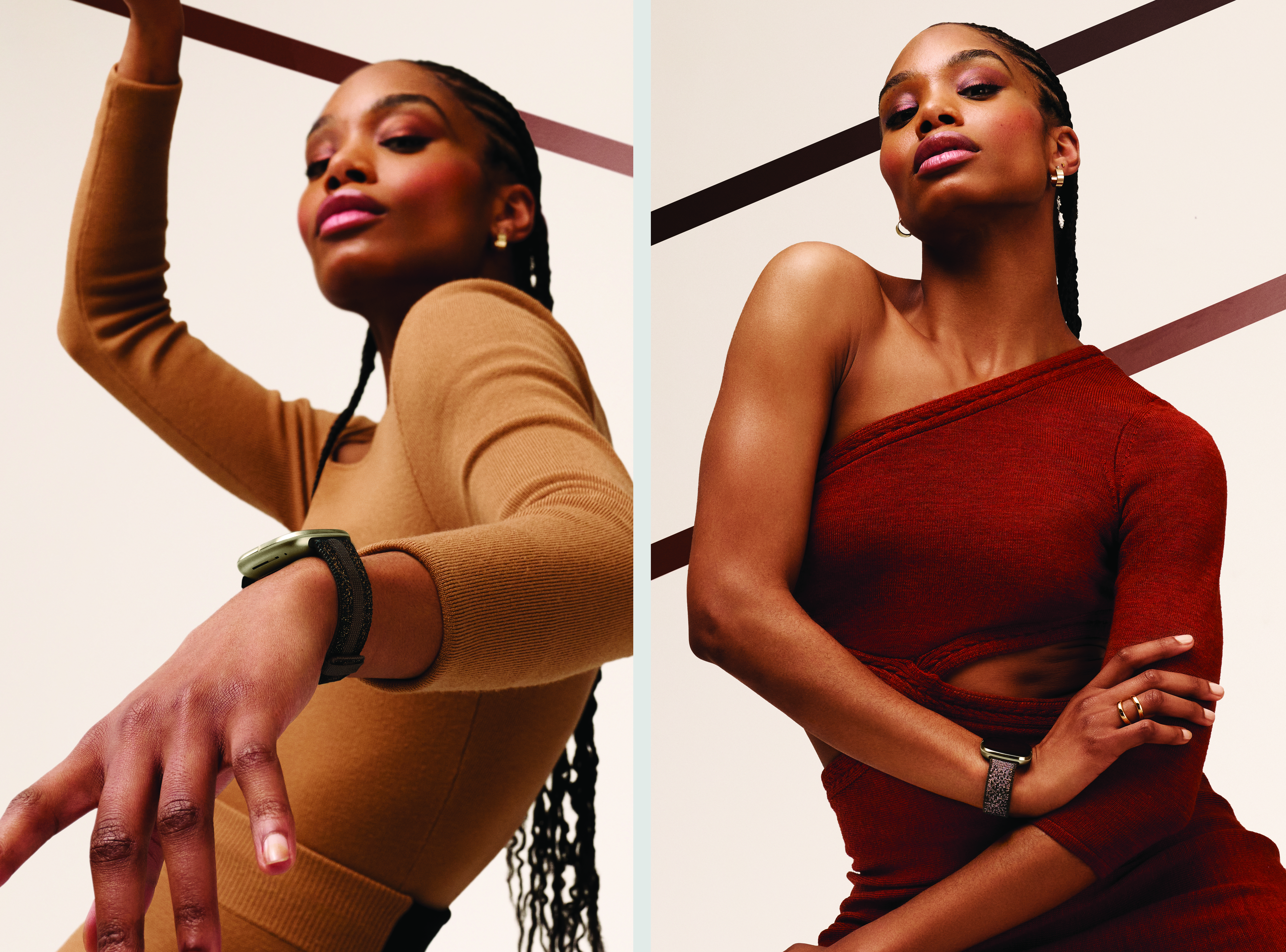 Smartwatches, one of the most obvious intersections of fashion and technology, show no sign of slowing down. An analysis by Counterpoint Research pegged a 35 percent jump in global smartwatch shipments between the first quarter of 2020 and 2021.

For the broader wearables market, research firm IDC estimates that companies shipped a total of 104.6 million units in the first quarter, for a gain of 34.4 percent over the 77.8 million units shipped during the same quarter a year ago. First-quarter shipments had never topped 100 million units before, it reported.

The Consumer Technology Association predicts that wearable gadgets will ride the coattails of a booming consumer tech market, which is expected to generate a record-breaking $487 billion in revenue this year.

The momentum has tech giants moving to drive or shore up their wearables initiatives. That includes Google, which acquired Fitbit this year and struck a new partnership with Samsung, which led to its latest Galaxy Watch4.

Apple, of course, remains at the top of the heap as it emphasizes health and wellness features in its Apple Watch and, as of last year, lower price points. The combined effect may be what’s appealing to a COVID-19-stricken public focused more on health than ever before.

Meanwhile, everyone from Apple to Amazon and Facebook, among others, including a rising tide of startups, is working on new types of wearable devices that go beyond wrists to fingers, ears and even eyes. Smart glasses, and eventually augmented reality glasses, are destined to be the “it” thing in tech, these firms strongly believe, and they’re putting their money where their mouth is.

According to Facebook, its EssilorLuxottica partnership will bear fruit sometime this year. In July, during the company’s earnings call, chief executive officer Mark Zuckerberg promised that a new, techified set of Ray-Bans will be the company’s next hardware release. “The glasses have their iconic form factor, and they let you do some pretty neat things,” he said. “So I’m excited to get these in people’s hands and to continue to make progress on the journey towards full augmented reality glasses in the future.”

If it goes well, that could speak to the sort of opportunity in front of tech companies and their fashion partners. Even if it doesn’t, that’s not likely to dissuade Silicon Valley, which is used to hammering away at a technology until it gains traction.

That’s where fashion comes in. And at least some designers are taking stock of the moment and what it means for them.

“For me, the biggest takeaway of the evolving synergies of fashion’s alignment with tech is that the tech companies are creating a space where fashion designers are able to embrace all aspects of their work, from the bold creativity of the design process to the marketing and business strategies,” Glemaud said. That creates “a holistic collaboration that will build awareness, mutual respect, strong sales and hopefully lead to long term partnerships.”

He believes that the future of fashion and tech will continue to be “intertwined.” He added, “From wearables to the way we sell and deliver collections, all aspects of fashion will embrace technology more and more. I look forward to seeing new innovations and ideas emerge and being part of them.”