NEW YORK (Reuters) – United Nations Secretary-General Antonio Guterres warned on Thursday that a global recession “is a near certainty” and current national responses to the coronavirus pandemic “will not address the global scale and complexity of the crisis.” 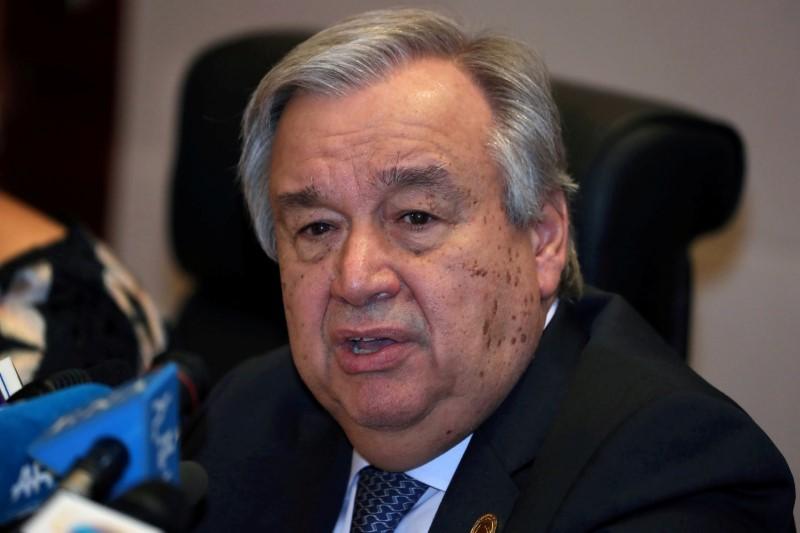 “This is a moment that demands coordinated, decisive, and innovative policy action from the world’s leading economies,” Guterres told reporters via a video conference. “We are in an unprecedented situation and the normal rules no longer apply.”

“A global recession – perhaps of record dimensions – is a near certainty,” he said.

The world’s wealthiest nations poured unprecedented aid into the traumatized global economy on Thursday as coronavirus cases ballooned in Europe, the current epicenter, even as they waned at the pandemic’s point of origin, China.

“Our world faces a common enemy. We are at war with a virus,” Guterres said. “I call on world leaders to come together and offer an urgent and coordinated response to this global crisis.”

Guterres, who was prime minister of Portugal from 1995 to 2002, called on countries to scale up health spending and to help less-prepared nations tackle the crisis, including by supporting the efforts of the World Health Organization.

“A wealthy country must not be convinced that it has only to deal with its own citizens. It’s in the interests of a wealthy country to contribute to a global response because the crisis can come from wherever, at any moment,” he said.

Guterres said he would take part in the emergency Group of 20 nations summit planned for next week.

“My very strong appeal to the G20 is to have a particular concern with African countries and other countries in the developing world,” Guterres told reporters.

“We must absolutely be strong in supporting them because the virus is coming to them and their health systems are extremely weak, so they need very strong support from the developed world and if that support is denied we could have catastrophic consequences,” he said, warning millions could die.

He said that when it came to the global economy the liquidity of the financial system must be guaranteed and that banks must use their resilience to support their customers.

“G20 leaders have taken steps to protect their own citizens and economies by waiving interest payments. We must apply that same logic to the most vulnerable countries in our global village and alleviate their debt burden,” he said.