On an October evening five years ago, Elon Musk used a former set for “Desperate Housewives” to show off Tesla’s latest innovation: roof shingles that can generate electricity from the sun without unsightly solar panels.

After delays, Tesla began rolling out the shingles in a big way this year, but it is already encountering a major problem. The company is hitting some customers with price increases before installation that are tens of thousands of dollars higher than earlier quotes, angering early adopters and raising big questions about how Tesla, which is better known for its electric cars, is running its once dominant rooftop solar business.

Dr. Peter Quint was eager to install Tesla’s solar shingles on his 4,000-square-foot home in Portland, Ore., until the company raised the price to $112,000, from $75,000, in a terse email. When he called Tesla for an explanation, he was put on hold for more than three hours.

“I said, ‘This isn’t real, right?’” said Dr. Quint, whose specialty is pediatric critical care. “The price started inching up. We could deal with that. Then this. At that price, in our opinion, it’s highway robbery.”

The price increases are the latest misstep by Tesla’s solar unit, which also sells conventional panels. The company has gone from the biggest rooftop solar installer in the United States to a distant second in the last several years. An effort to win back market share by slashing the price of panels in 2019 has done little to stem the slide.

At the “Housewives” set at Universal Studios in 2016, Mr. Musk, the company’s chief executive, promised that Tesla’s new shingles would turbocharge installations by attracting homeowners who found solar panels ugly. But shingles remain such a tiny segment of the solar market that few industry groups and analysts bother to track installations.

Tesla is not the only company to pursue the idea of embedding solar cells, which covert sunlight into electricity, in shingles. Dow Chemical, CertainTeed, Suntegra and Luma, among others, have offered similar products with limited success. 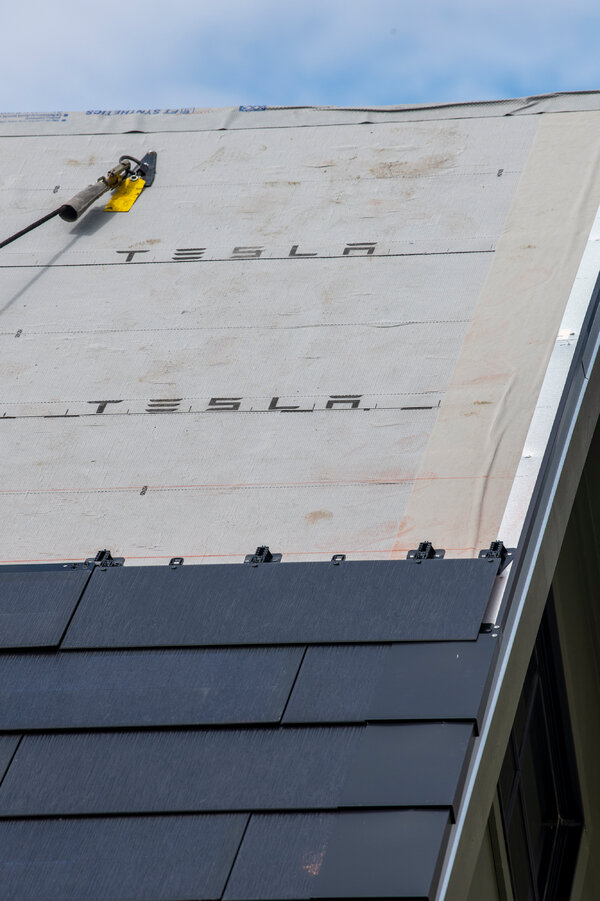 But given Mr. Musk’s success with Tesla’s electric cars and SpaceX’s rockets, Tesla’s glass shingles attracted outsize attention. He promised that they would be much better than anything anybody else had come up with and come in a variety of styles so they could resemble asphalt, slate and Spanish barrel tiles to fit the aesthetic of each home.

Many of those promises remain just that. Tesla sells only one version, which resembles the common asphalt shingle.

During a quarterly earnings call on Monday, Mr. Musk insisted that demand for Tesla’s solar roofs “remains strong” even though the company had raised prices substantially. He described the last-minute increases as a teething problem.

“We did find that we basically made some significant mistakes in assessing the difficulty of certain roofs,” he said. “You just can’t have a one-size-fits-all situation.”

Tesla’s solar ambitions date to 2015 when it announced that it would sell panels and home batteries alongside its electric cars. A year later, the company acquired SolarCity, a company run by Mr. Musk’s cousin Lyndon Rive. SolarCity was the leading rooftop solar installer in the United States, but in the last five years Tesla has fallen far behind Sunrun, which became even bigger last year after buying another installer, Vivint.

Tesla has been losing market share even as demand for rooftop solar has increased sharply as panels have become more affordable. In terms of energy-generating capacity, annual installations are about 13 times as great as they were a decade ago, according to the Solar Energy Industries Association.

Solar shingles historically have been 20 to 30 percent less efficient at converting sunshine to electricity than panels, said Vikram Aggarwal, a co-founder and the chief executive of EnergySage, a solar comparison-shopping service. It is unclear if Tesla has improved on the performance of shingles, he said, though they are appealing to many homeowners because the roofs look like any other.

But the company’s recent price increases suggest that solar shingles will remain a niche product for now, Mr. Aggarwal said. “It looks like they’re targeting the superpremium channels, people who are looking to install expensive roofs,” he said.

At conferences and meetings in the late 1990s, like a door-to-door salesman, Mr. Reicher would pull a solar shingle out of his briefcase to illustrate his vision for the future of home electricity.

“This is where we’re headed — this is a solar shingle,” he would tell anyone who would listen. “It gives you shelter from the elements and electricity from the sun.”

The shingle he carried was made by United Solar Ovonic, a subsidiary of Energy Conversion Devices, which filed for bankruptcy and went out of business in 2012.

Mr. Reicher had Tesla shingles installed this month on an addition to his home in Vermont. (He had conventional solar panels installed on a home when he lived in Washington).

Under partly cloudy skies on two cool days, a handful of workers climbed onto Mr. Reicher’s home in Warren, Vt., a town between the ranges of the Green Mountains. After federal tax credits are taken into account, he will have paid about $16,000. The price was that low because he was not installing the shingles on his entire house and was not replacing a roof.

“He’s been waiting for this for 25 years, like people waited for the iPhone,” said Tom Berry, a vice president at SunCommon, the contractor that installed the shingles.

Mr. Reicher ordered his shingles through SunCommon rather than directly from Tesla. SunCommon, which like Mr. Reicher had been keenly waiting for these shingles, said Tesla’s price increases for direct customers did not affect at least some wholesalers like SunCommon.

The New York Times spoke to three homeowners around the country who were told by Tesla that their systems would cost a lot more. Two canceled the work, and the third was determining his next steps because he had already spent almost $5,000 prepping his home for the Tesla system.

Mr. Musk and Tesla did not respond to requests for comment.

Dr. Quint, in Portland, had decided to go with Tesla’s shingles because he needed to replace the original roof on the home his family had built more than 30 years ago. He signed a contract on Sept. 11 and paid a $100 deposit. His system cost a lot more than Mr. Reicher’s because it was more than twice the size of a typical home solar system.

“The Tesla roofs do look really nice,” Dr. Quint said. “People would be like, ‘Whoa.’”

The first estimate of the installation was over $60,000 but just a few thousand dollars more than what conventional panels and a new roof would have cost, he said. During the months that Tesla was designing the system and getting building permits, he added, the company raised the price a bit, which was OK with him. But the final quote in March, $112,000, was far higher.

Unwilling to pay that much, Dr. Quint sought out another installer and decided to use conventional shingles and solar panels, saving him almost $70,000 from the final Tesla price.

Ana Bianchi of Walnut Creek, Calif., a San Francisco suburb, was also hit by a big price increase. Tesla initially told Ms. Bianchi that her shingle and battery system would cost $63,000. But two weeks before installers were scheduled to show up, an email from the company raised the price to $85,000.

She wanted the system to protect her family from losing electricity when her utility, Pacific Gas & Electric, shuts off power to prevent its equipment from setting off wildfires. She also hoped to lower her electricity bills, which have jumped from about $200 a month to as much as $400 in the four years since her family moved to California from New York.

She sought out Tesla’s shingles because contractors had told her that they could not attach conventional solar panels to her composite roof.