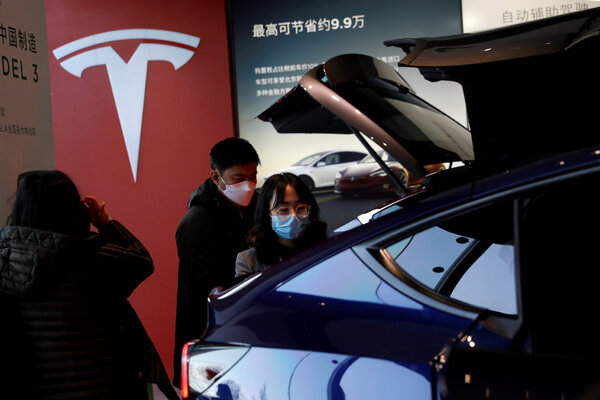 Tesla on Wednesday reported its first full-year profit, a feat 18 years in the making.

The company’s fourth quarter earnings were below analysts’ expectations and Tesla stock fell about 4 percent in extended trading on Wednesday.

Tesla’s transformation from a company that lost large sums of money every year has been made possible in large part by rising sales in China and Europe and the addition of a fourth car, the Model Y, that appears to have become its top seller in the United States.

Tesla’s sales rose about 36 percent to 499,550 cars in 2020. The increase was fueled by a new factory in Shanghai that opened a year ago and is now starting to produce the Model Y as well as its predecessor, the Model 3. China is the world’s largest market for electric and conventional cars.

Elon Musk, Tesla’s chief executive, has suggested that the company could sell more than 800,000 cars in 2021 as it expands output at its Chinese plant and opens a third plant now under construction near Berlin. It is also building a factory near Austin, Texas, that is expected to begin churning out cars by the end of the year.

But the automaker is also facing several challenges. In Europe, Tesla is encountering increasing competition from Volkswagen, Renault, Hyundai, Daimler and other manufacturers that have introduced improved and more affordable electric cars.

While Tesla does not break out its sales by region or country, it appears that the company’s U.S. sales slowed in 2020, mainly because of the coronavirus pandemic. But the company has also seen Model 3 sales stall as Model Y deliveries have increased, according to data on new-car registrations from California, Texas and 20 other states analyzed by Cross-Sell, a market research firm.

Competition in the United States is heating up, too. Ford Motor recently started delivering the Mustang Mach E, an electric sport-utility vehicle, and Volkswagen says it will introduce an electric S.U.V., the ID.4, in March. Both are eligible for federal tax credits that no longer apply to Tesla cars, making them more affordable than the Model Y.