A district attorney filed five felony and 28 misdemeanor counts in connection with the Kincade Fire, which ravaged Sonoma County. 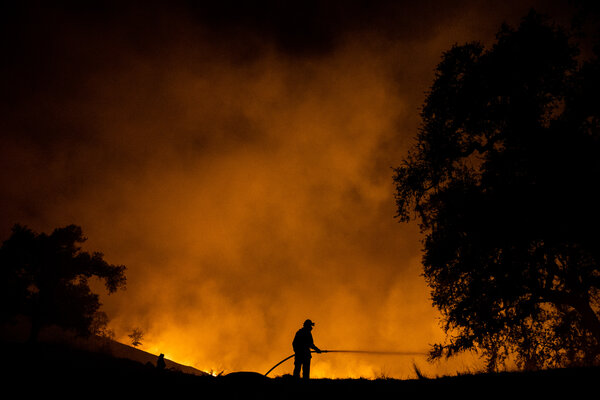 Pacific Gas & Electric, the troubled utility that has started some of California’s most destructive wildfires, faces new criminal charges, for its role in igniting a 2019 wildfire that burned 120 square miles in Sonoma County north of San Francisco.

The county’s district attorney on Tuesday charged PG&E, which emerged from bankruptcy protection last year, with five felonies and 28 misdemeanors, including recklessly causing a fire with great bodily injury, in connection with the Kincade Fire. The blaze damaged or destroyed more than 400 buildings and seriously injured six firefighters.

This is the third set of criminal charges filed against PG&E, California’s largest utility. A jury in 2017 convicted PG&E of charges related to five deaths in a gas pipeline explosion seven years earlier. And the utility pleaded guilty last year to 84 counts of involuntary manslaughter in connection with the 2018 Camp Fire, which was started by its equipment. That fire destroyed the town of Paradise and helped drive PG&E into bankruptcy, where it worked to resolve an estimated $30 billion in wildfire liabilities.

California’s Department of Forestry and Fire Protection concluded that the Kincade Fire had started after high winds knocked a cable from a PG&E tower at the Geysers geothermal field. The fire took 15 days to contain, and the district attorney, Jill Ravitch, described the evacuation required in some towns as the largest ever in Sonoma County, a California wine hub.

If convicted, PG&E could face fines and additional penalties for violating a federal probation that stems from the pipeline explosion case. The company has paid billions of dollars to governments, families, insurance companies and others for disasters caused by its equipment, which regulators have said has often been very poorly maintained.

In a statement on Tuesday, PG&E promised that it would continue upgrading its equipment and carrying out safety practices to protect Californians. The company said it accepted findings that its equipment had caused the Kincade Fire but did not believe it was criminally liable.

“We are saddened by the property losses and personal impacts sustained by our customers and communities in Sonoma County and surrounding areas as a result of the October 2019 Kincade Fire,” the company said. “We do not believe there was any crime here. We remain committed to making it right for all those impacted and working to further reduce wildfire risk on our system.”

The company emerged from bankruptcy last summer, agreeing to pay $13.5 billion to a fund set up to compensate tens of thousands of individuals and families who lost homes in wildfires started by PG&E.

Emerging from bankruptcy allowed the utility to participate in a $20 billion state wildfire fund with California’s other investor-owned utilities to help cover costs of future wildfires.

The utility has been working to improve its equipment, adding weather stations, cameras, micro-grids and sturdier transmission towers and lines. Patricia K. Poppe, who became chief executive of PG&E’s parent company in January, said she had taken the job “to ensure that we care for all those who were harmed, and that we make it safe again in California.”

“We will work around the clock until that is true for all people we are privileged to serve,” she added.