Condé Nast, the venerable magazine’s parent company, agreed to a minimum salary of $60,000 by April 2023, the union said. The deal also covers workers at Ars Technica and Pitchfork. 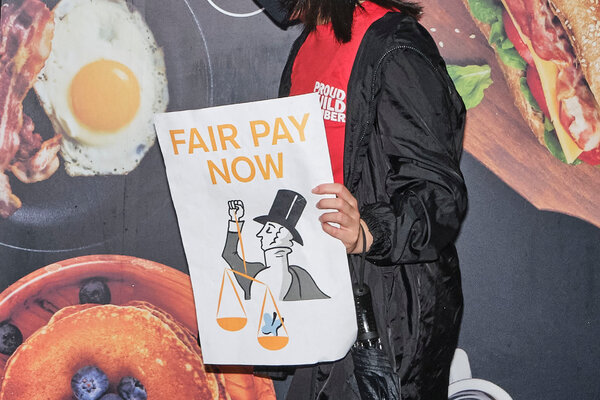 After more than two years of talks, an evening protest outside Anna Wintour’s townhouse in Greenwich Village and the threat of a strike, a group of union employees at The New Yorker and two other publications has reached a deal with their parent company, Condé Nast.

The New Yorker Union and the unions representing two other Condé Nast publications, Ars Technica and Pitchfork, came to an agreement with company on Wednesday after bargaining together for higher wages and improved health benefits, among other demands.

“These landmark agreements, which will go before members for a ratification vote in the coming weeks, will inaugurate a new era of equity, transparency and accountability at The New Yorker, Pitchfork, Ars Technica and Condé Nast at large,” the unions for the three publications said in a joint statement.

The three unions are affiliated with the NewsGuild, which also represents employees at The New York Times and other media organizations.

During talks, The New Yorker Union demanded a base salary of $60,000, saying that some workers in the union made as little as $42,000 annually. The New Yorker Union is made up of fact checkers, copy editors and other editorial workers, but does not include the magazine’s staff writers.

The deal with Condé Nast includes base pay of $55,000 for employees at all three unions, rising to $60,000 by April 2023. Under the agreement, many employees at the three publications will receive wage increases of at least 10 percent, the unions said in a statement.

The agreement includes a cap on increases for health care costs and defined working hours. Contracts will also include a “just cause” provision stating that managers must provide specific reasons before disciplining or firing employees.

“I am elated that we have such a strong contract for our members now and such a strong contract to build on in future negotiations,” Natalie Meade, a New Yorker fact checker and the unit chair of The New Yorker Union, said in an interview on Wednesday. She added that the union had been able to “break the curse of stagnant wages” at the publication.

A spokeswoman for Condé Nast, which also publishes Vogue, Vanity Fair and Wired, among other publications, said the company was pleased to have reached an agreement with the unions, adding that the “new executive leadership team has implemented equitable compensation and inclusive benefits standards across our work force. These standards are now reflected in our agreement with union employees.”

Roger J. Lynch joined the company as its chief executive in 2019. He leads Condé Nast with Ms. Wintour, the longtime editor of Vogue who is also Condé Nast’s worldwide chief content officer.

The New Yorker Union formed in 2018. It was the first union in the 96-year history of the magazine that has the monocled dandy Eustace Tilley as its mascot.

Last week, The New Yorker Union unveiled a website including the statement that it was “on the verge of a strike.” On June 8, roughly 100 people protested outside the home of Ms. Wintour, whose wide-ranging role at Condé Nast does not include oversight of The New Yorker. The New Yorker has been run by the editor David Remnick since 1998.