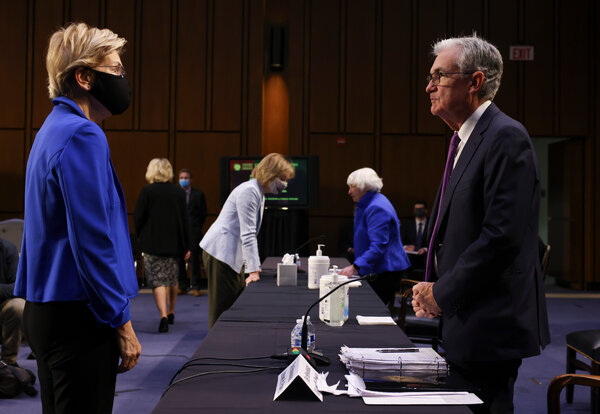 Critics build their case against Powell

Jay Powell, the Fed chair, has been praised for how he used the central bank’s powers to steer the economy through the pandemic. His term as chair expires in February, and insiders say that he has a good chance of being reappointed. But the decision is subject to an unusually high level of uncertainty, with growing complications around his renomination, The Times’s Jeanna Smialek and Jim Tankersley report.

Powell’s critics cite ethical lapses at the Fed and his mixed record as a regulator. Senator Elizabeth Warren, who opposes Powell’s renomination, said that the chair should be held responsible for recent revelations that top Fed officials traded in their personal accounts last year, when the central bank’s policy moves could have benefited their portfolios.

The trading scandal has added ammo for Powell’s critics, who say that the former investment banker and private equity executive has blind spots on banking regulation. This is a narrative that has been growing since this summer, when Better Markets, a nonprofit group skeptical of big banks, released a report critical of Powell’s regulatory record.

Rating Powell’s record on regulation: DealBook reached out to experts in banking regulation for an assessment of the Fed chair’s tenure. Their opinions were mixed:

Anat Admati, a Stanford professor and big-bank gadfly, said that Powell “allowed the banks to pay out dividends at the height of the pandemic, when we were facing massive uncertainty. That was unambiguously a bad decision.”

James Barth of Auburn University and the Milken Institute, said, “In my view, he has not taken any actions to make significant changes in any of the existing major U.S. banking laws to classify him as a lax or stringent chairman.”

Karen Petrou, co-founder of Federal Financial Analytics, said that “the fundamental constructs” of post-crisis regulation remained intact, so debates over Powell’s regulatory role were “big arguments over unremarkable changes.” Powell’s problem is that the biggest risks are now outside the traditional banking system, in fintech, cryptocurrency and other sectors outside the Fed’s authority, Petrou noted. Congress has the power to fix that, but not by sending Powell packing, she said.

There’s also a fight brewing over who will lead the Office of the Comptroller of the Currency, another banking regulator. The White House’s pick, Saule Omorova, a favorite of progressives, is facing opposition from trade groups representing both the biggest banks and the smallest community lenders, which could influence moderate Democratic support for her nomination.

A new report paints an apocalyptic picture of a U.S. debt default. As Congress wrangles over whether to raise the federal debt limit, White House economists published a report today about the “economic maelstrom” that would result if the government can’t pay its bills. President Biden and Treasury Secretary Janet Yellen will meet with C.E.O.s today to discuss the debt limit.

Facebook says its outage was tied to a cascade of mistakes. In a blog post, the social media giant explained that a wrong command during routine maintenance took down its network. The hourslong outage on Monday has added to advertisers’ growing doubts about the effectiveness of the platform.

Kellogg workers stage a walkout. About 1,400 employees went on strike at cereal factories in Michigan, Nebraska, Pennsylvania and Tennessee. The action, by the same union that led a recent walkout at Nabisco, comes as unions tap into the frustrations of workers during the pandemic.

Biden slashes his social spending bill by more than $1 trillion. The White House and Democratic leaders said that they would propose spending $2.3 trillion on social programs over a decade. That’s substantially less than their original $3.5 trillion plan, which could mean jettisoning some initiatives entirely.

Ozy Media is sued. LifeLine, which manages the money of athletes and celebrities, invested $2 million in Ozy in February. In its suit, LifeLine says Ozy failed to disclose pertinent facts about its business before it invested, including the infamous conference call in which an Ozy executive impersonated someone from YouTube.

Magnolia Pictures, the film distributor owned by Mark Cuban and Todd Wagner, has hired an investment bank to run a sale of the company, DealBook hears. The move reflects the rising value of film libraries as streaming services amass content. (See: Amazon’s $8.45 billion acquisition of MGM in May.) Cuban and Eamonn Bowles, Magnolia’s president, did not respond to requests for comment.

Magnolia has managed to survive in a tough corner of Hollywood. Its business model involves buying rights to finished films at festivals like Cannes and Sundance and attracting an audience through grass-roots marketing and awards buzz. While mass-appeal movies have started to rebound at the box office, art-house films haven’t followed suit, in part because their audience tends to be older and therefore more concerned about the coronavirus.

Magnolia has about 500 films in its library. The company, founded in 2001, is known for documentaries like “Blackfish,” “I Am Not Your Negro” and “Capturing the Friedmans.” It generated around $30 million in sales last year and expects to bring in about $40 million this year.

It was once part of a bigger media play. Wagner and Cuban’s 2929 Entertainment wanted to bring big-media ideas of vertical integration to the art-house world when it acquired Magnolia and the indie cinema chain Landmark Theatres in 2003. But the group sold Landmark to the billionaire Charles Cohen’s real estate group in 2018, when Netflix was emerging as an art-film superpower.

Plenty of smaller film companies are exploring deals in hopes of tapping streamers’ appetite for content. Blackstone’s yet-to-be-named media venture has acquired Reese Witherspoon’s Sunshine Productions for roughly $900 million, for example, and Will Smith and Jada Pinkett Smith’s media company, Westbrook, is also reportedly in talks with the outfit. SpringHill, an entertainment company controlled by LeBron James that helped produce the “Space Jam” reboot, has reportedly been in talks with RedBird Capital.

In more than three hours of testimony at the Senate yesterday, Frances Haugen, a former Facebook product manager who has turned whistle-blower, gave lawmakers a rare look into the inner workings of the tech giant.

“As long as Facebook is operating in the shadows, hiding its research from public scrutiny, it is unaccountable.”

— Haugen on the need for more regulation of Facebook. “There is nobody currently holding Zuckerberg accountable but himself,” she said of the company’s founder and controlling shareholder. “The buck stops with Mark.”

“I have rarely, if ever, seen the kind of unanimity on display today.”

— Senator Richard Blumenthal, Democrat of Connecticut, in a news conference after the hearing, on the bipartisan appetite for regulation of Facebook. During the hearing, Senator Jerry Moran, Republican of Kansas, told Blumenthal, “The conversation so far reminds me that you and I ought to resolve our differences and introduce legislation.”

“Facebook and the other big tech companies are throwing a bunch of money around this town, and people are listening to them.”

— Senator Amy Klobuchar, Democrat of Minnesota, on what has held back regulation of Big Tech to date.

“Most of us just don’t recognize the false picture of the company that is being painted.”

— Mark Zuckerberg in a memo to Facebook employees sent after the hearing.

Jonathan Kanter, President Biden’s choice to be the Justice Department’s antitrust chief, will have his nomination hearing before the Senate Judiciary Committee today. It comes during a push by progressives to remake antitrust law, which coincides with record deal volumes.

If approved for the post, some say that Kanter could be the toughest antitrust enforcer since Joel Klein — who famously took on Microsoft. That would make Kanter an unlikely economic populist, since in private practice he once represented … Microsoft.

Kanter is a Big Law partner with a progressive bent. In his years of private practice, Kanter took on Big Tech on behalf of clients like Microsoft and News Corp. He has said that the work led him to see the dangers of corporate concentration. While tech companies may push for Kanter’s recusal given his past work, legal experts said that it shouldn’t be a problem unless he was put in a position to oversee a case against a company he defended, like Microsoft.

His nomination has bipartisan support. Senator Elizabeth Warren, whom Kanter advised on her run for the Democratic presidential nomination last year, has offered her endorsement. Two of nine former heads of the Justice Department who wrote in support of Kanter’s nomination worked in Republican administrations: Charles Rule from the Reagan administration and Makan Delrahim from the Trump administration. “I don’t agree with him,” Rule told The Times, “But he has the ideology they want, and he is in the top echelon of antitrust lawyers of his generation.”

There are some $1.9 trillion in pending deals, according to Bloomberg. Stricter scrutiny could scuttle some of those mergers, such as the aborted combination of Aon and Willis Towers Watson, which gave up on their $30 billion tie-up in July rather than endure a lengthy court battle with the Justice Department. Last month, the department filed an antitrust suit against American Airlines and JetBlue for a partnership it argued amounted to a “de facto merger.”

Business groups are concerned about the direction of antitrust enforcement. “The government already has the power it needs to review and challenge the comparatively few mergers and acquisitions that raise competitive concerns,” a coalition of industry groups wrote in a letter to the Senate subcommittee in advance of Kanter’s hearing.

Private equity firms are offering the highest premiums for listed companies in over 20 years. (FT)

Nvidia has offered concessions to the E.U. to get the green light for its $54 billion acquisition of Arm. (Reuters)

Lawmakers are seeking details on the revolving door between accounting firms and the Treasury Department. (NYT)

“I Designed Algorithms at Facebook. Here’s How to Regulate Them.” (Times Opinion)

A start-up is seeking approval from the S.E.C. to operate the first round-the-clock U.S. stock exchange. (WSJ)

Hank Paulson, James Gorman and others discuss the legacy of David Komansky, the former chief of Merrill Lynch, who died last week at age 82. (NYT)