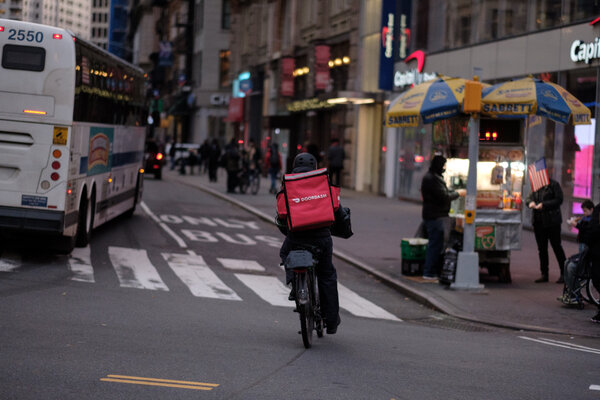 In its first earnings report as a public company, DoorDash showed how it has benefited from the pandemic even as it hinted that difficulties might lie ahead.

The delivery company on Thursday posted revenue of $970 million for the fourth quarter, up 226 percent from a year earlier, as total orders jumped 233 percent. The company’s fortunes have been buoyed by the pandemic, as people have stayed home to keep safe from the coronavirus and have used DoorDash to order in food and other items.

Yet it also reported a loss of $312 million, compared with a loss of $134 million a year earlier. The company, which went public in December, said it had increased spending on advertising, customer recruitment, research and development, and other expenses. DoorDash said it had also lost money because of costs associated with stock-based compensation related to its initial public offering.

More important, DoorDash warned that its boost from the pandemic might fade. The widespread availability of vaccines in the coming months, the company said, is likely to create “headwinds” to growth.

“We expect declines in consumer engagement and average order values, though the precise amount remains unclear,” the company said.

Beyond the short-term effect of the pandemic, DoorDash faces other challenges. Restaurant owners have complained that its fees, often 30 percent of orders, are too high to allow them to cover their costs. Some cities, including Cleveland, Denver and Chicago, have passed temporary measures to curb the fees that delivery apps charge restaurants during the pandemic. DoorDash has responded by charging customers extra fees in those cities.

In an earnings call, DoorDash executives said they were focusing on long-term success and growth. Tony Xu, the chief executive, said that even when restaurants reopened, people were likely to continue to rely on DoorDash’s deliveries because they had become “habituated to a convenience economy.”

“This business is even more critical as we come out of the pandemic,” he said.