An influential watchdog group on Thursday said the British government was doing far too little to implement the ambitious pledges it has made on tackling climate change.

Although the government has promised to cut its greenhouse emissions to net zero by 2050, it has failed to take interim steps — such as tax incentives for reducing emissions — essential to meet that goal, according to a report by the group, the Committee on Climate Change.

“The trouble is the action, the delivery has just not been there,” said John Gummer, chairman of the committee, which is funded by the British government to advise lawmakers on environmental policies.

The criticism may prove uncomfortable for Prime Minister Boris Johnson. Mr. Johnson has made leadership on climate diplomacy a key pillar for the post-Brexit Britain that he is trying to shape.

Britain’s ambitions to wield influence in this area will be on display later this year in Glasgow, Scotland, where Mr. Johnson is expected to chair a significant international gathering known as COP26, which leaders like President Biden hope will be a forum for advancing the global climate agenda.

In 2019, Mr. Johnson sketched a vision for a “green industrial revolution” in Britain, pledging to ban the sale of most new gasoline and diesel-powered cars by 2030 and holding out the prospect of creating some 250,000 jobs in areas like offshore wind, hydrogen and battery production. The ideas followed legislation passed in 2019, before Mr. Johnson took office, that established the net-zero pledge for 2050.

On Thursday, though, the committee said that while such pledges were “historic,” the government was badly lagging in making good on them.

“What we have seen since then is almost nothing at all,” Chris Stark, the chief executive of the committee, said in an interview.

The committee and environmentalists have warned that continued lack of follow-through could make it difficult for Mr. Johnson to persuade other governments to take potentially painful steps on reducing emissions at the climate summit.

“Everyone is looking for action and delivery, not for promises,” said Mr. Gummer, a former cabinet minister who, like Mr. Johnson, is a member of the Conservative Party. 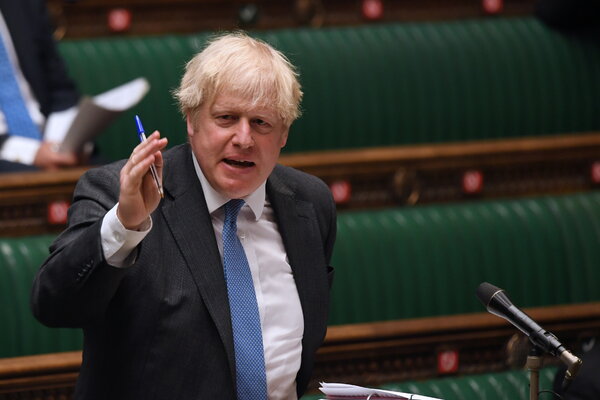 Unless the government comes up with credible plans, he said, “the whole concept of global Britain being a leader will, in fact, be undermined.”

In a report published on Thursday, the committee wrote that reaching net zero as well as interim milestones will require what it called a significant change in government action. In addition to tax incentives to spur reduced emissions, the committee called for dedicated government spending to reduce emissions from industry, buildings and agriculture, and a bigger effort to point out the opportunities offered to people and businesses by tackling climate change.

So far, the report’s authors wrote, “it is hard to discern any comprehensive strategy in the climate plans we have seen in the last 12 months.”

Analysts say that the criticism may well nudge the government to do more, especially with the climate summit coming.

Doug Parr, the chief scientist of the environmental group Greenpeace UK, said the committee’s critique will be “awkward” for the government. “In this year of all years, yes, it will matter,” he added.

The committee has clout because it is part of the legal framework credited with Britain’s achievements to date on climate. In recent decades, Britain has by some metrics been among the world leaders on tackling climate change, reducing emissions by 40 percent from 1990 to 2019.

Many observers give credit for Britain’s performance to legislation in 2008 that set legally binding emissions target and established the committee to monitor progress and advise the government.

At the same time, many say, government foot-dragging at this juncture is not surprising, because Britain has previously picked the low-hanging fruit on climate change and now faces more difficult hurdles to make further progress.

A large portion of the earlier gains have come in the power sector. Britain has replaced most of its highly polluting coal-fired generators — first with natural gas-fueled plants and, more recently, with renewable generation sources, carpeting the shallows of the North Sea with wind turbines.

Analysts say reducing carbon in electric power is relatively easy because the consumer does not see any real change when she flips a light switch. Future progress may require more intrusive and expensive measures, such as replacing natural gas heating systems with devices known as heat pumps and widespread retrofitting of homes with insulation.

“All politicians are deeply afraid of having to engage with consumers and people’s houses because of the political sensitivities,” said Nick Mabey, the chief executive of E3G, an environmental group.