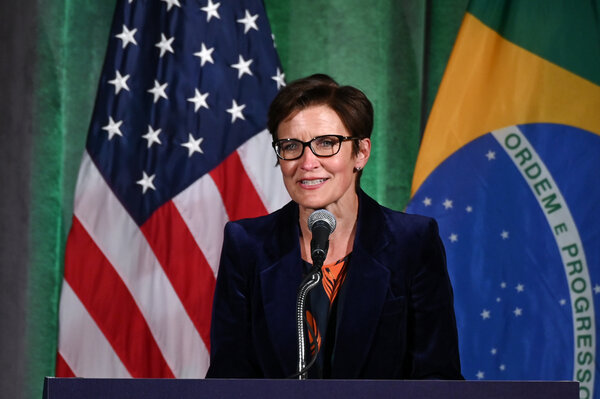 Next month, Jane Fraser will take over Citigroup — and a major turnaround effort. “The sprawling institution has been limping along in third place among the four biggest U.S. banks, underwhelming its investors and irritating regulators,” The Times’s Emily Flitter writes. She spoke with Ms. Fraser about the scale of the challenge and how she plans to tackle it.

What went wrong. Long-running failures to manage risk and catch money launderers, among other “unsafe and unsound banking practices,” as federal regulators put it, led to a $400 million fine in October. Two months earlier, Citi accidentally wired $900 million to lenders of Revlon, instead of a much smaller interest payment, and has been fighting to get it back. Its core performance has trailed JPMorgan Chase and Bank of America, with Citi reporting a bigger fall in earnings last year and a lower return on equity. And its shares have underperformed, with valuation metrics like its price-to-earnings and price-to-book ratios far below the other megabanks.

A global approach. Ms. Fraser, 53, is a Citi veteran who ran the group’s Latin American operations before becoming the bank’s president in 2019. She said she would apply lessons she learned in other countries to Citi in the U.S., especially on improving financial inclusion, as the bank did in Mexico with cheap money transfers via QR codes on smartphones.

Beware the “glass cliff.” Ms. Fraser will be the first woman to lead a major American bank. Given Citi’s faltering fortunes, she will contend with the perception — backed by research — that women are more likely than men to be given tough cleanup jobs when promoted to top roles, setting them up for failure. (See also: Ginni Rometty at IBM and Mary Barra at G.M.) Here’s what Ms. Fraser had to say:

“When you get the job you don’t think of this in terms of: ‘OK, I’m a woman getting a job,’” she said. “You think about: What is it that the company needs today? What needs to be the same? I certainly have a different style, but I don’t think it’s necessarily so much gender related.”

Day 2 of the impeachment trial. Many senators became emotional after House impeachment managers presented previously unreleased security footage of the Capitol riot, showing how close some lawmakers came to encountering the attackers.

Amsterdam surpasses London as Europe’s trading hub. Shares worth roughly 9.2 billion euros ($11.2 billion) were traded on Dutch markets last month, beating the €8.6 billion traded on London exchanges. That shift is a tangible sign of how financial markets are being remade after Brexit.

President Biden talks with China’s leader for the first time since the election. In the conversation with Xi Jinping, Mr. Biden raised issues like trade, human rights abuses and climate change. They agreed to search for common ground, but each held firm on contentious issues like the status of Hong Kong.

The Biden administration asks the Supreme Court to save Obamacare. In a letter to the court, the Justice Department disavowed the Trump administration’s efforts to strike down the Affordable Care Act, saying it regarded the law as constitutional.

Moelis leans in on SPACs

The SPAC Atlas Crest announced a deal yesterday with Archer Aviation that will take the electric air taxi start-up public in a transaction valued around $3.8 billion. The SPAC is backed by an affiliate of Moelis, and the bank’s founder, Ken Moelis, told DealBook how the bank is benefiting from the SPAC business, which also serves to highlight the unique structure of these deals.

Mr. Moelis is investing alongside other senior bankers from his firm, as well as the carmaker Stellantis and Walmart’s former e-commerce chief, Marc Lore. United Airlines, a Moelis client, is putting in $20 million, and it also placed a $1 billion order for Archer aircraft. (Archer is also expected to become a Moelis client.) Moelis tapped its bankers, clients and external advisers to conduct the necessary due diligence, auditing and legal work.

“I’ve always been a pretty entrepreneurial banker,” said Mr. Moelis, who founded the investment bank in 2007 following top jobs at UBS and Donaldson Lufkin & Jenrette. “We don’t have a balance sheet and we don’t have a trading floor,” he said, which means his bank has the flexibility to expand into SPACs. Last month, Atlas Crest 2 filed for a $250 million I.P.O.

In other SPAC news: The former Credit Suisse chief Tidjane Thiam is teaming up with Pimco on a $250 million SPAC; a three-way merger of fitness firms and a SPAC affiliated with the former TikTok boss Kevin Mayer is worth nearly $3 billion; the first-day pop in the price of SPAC I.P.O.s this year is at a high; and insurers are struggling to keep up with demand for liability policies for newly listed shells.

“The desperation of investors to chase blank-check companies may serve as a contrarian indicator: after prior peaks in SPAC issuance in 2007 and 2011, the S&P 500 fell 58 percent and 22 percent.”

— Bank of America’s Research Investment Committee, in a new report.

The former Citigroup executive is running for New York City mayor on the strength of the story of his rise from poverty to Wall Street’s top ranks, his enviable list of contacts and his promises of progressive policies. But it’s unclear whether New York voters outside the business community that abhors Mayor Bill de Blasio will buy that argument, The Times’s Matt Flegenheimer writes.

Mr. McGuire’s pitch: He’s pledging to bring jobs back to New York City and to combat racial inequity — while rejecting some left-wing proposals for addressing it. He favors tax increases on the wealthy, but is fuzzy on potential spending cuts. He opposes universal basic income, a proposal that competitors like Andrew Yang have embraced.

“His team is working to stitch together an unusual Democratic coalition, crafting appeals to affluent Manhattanites — aggrieved by Mr. de Blasio’s snubs — and to lower-income, predominantly nonwhite voters in the other boroughs,” Matt writes. Mr. McGuire is friendly with moguls like the former Time Warner C.E.O. Jeff Bewkes and the real estate developer Peter Malkin, as well as civic leaders like the Rev. Al Sharpton.

Don’t call him the “Black Bloomberg,” even if some of his backers do so privately. Mr. McGuire rejects those comparisons: Mike Bloomberg didn’t grow up poor or find himself mistaken for a bathroom attendant early in his career, and he doesn’t risk being racially profiled now. And Mr. McGuire refuses to say whether Mr. Bloomberg — a bogeyman to progressives — was a good mayor.

For his part, Mr. Bloomberg reportedly favors a rival candidate, Shaun Donovan, who served in his administration.

The intriguing idea of ‘computational antitrust’

If those policing Big Tech had tools as powerful as companies do, they might detect and prevent anti-competitive activity more effectively. Many antitrust agencies around the world are underfunded and overwhelmed, contending with massive amounts of information and fast-moving markets. Automation is a way to “fight fire with fire,” according to Thibault Schrepel, the leader of a new “computational antitrust” project at Stanford.

Fifty antitrust agencies are joining the project, including the U.S. Justice Department, along with legal scholars and computer scientists. They will publish research in a new journal, compare notes on internal practices, hold a workshop and issue a report on what they learn in a year. But Dr. Thibault imagines the work continuing for decades, evolving with technology.

There is a lot of data to be collected, shared and used in new ways, said Eleanor Fox of Columbia, who is on the project’s advisory board. Intelligent automation could produce more nuanced antitrust analyses, by measuring the effects of mergers on particular socioeconomic groups, for example. But she also warned about “the tyranny of numbers,” noting that the project will force participants to consider what cannot be reduced to a figure. “When you talk about data, you also have to talk about values,” she said. “And assumptions.”

Felix Chang of Cincinnati University has been working on automated antitrust reviews for a few years, mining a Harvard database of court cases to spot patterns in language that provide “a fresh take” on how the law is applied. Mr. Chang also has reservations about automation in the law — it’s “cool” and “creative,” he said, but the programs can be biased and their results are only as good as the data sets they are based on.

The dating app Bumble beat expectations by raising $2.2 billion in its I.P.O., valuing the Blackstone-backed company at over $7 billion. (Reuters)

Ram Sundaram, a top trader at Goldman Sachs, is leaving the firm after two decades as it focuses on its advisory business. (Bloomberg)

President Biden is reportedly considering Lisa Cook, an economist at Michigan State University, for the Fed’s board of governors. She would be the first Black woman in the role. (Axios)

Senator Bernie Sanders grilled Neera Tanden, Mr. Biden’s pick to lead the Office of Management and Budget, over the large corporate donations she secured while running a think tank. (NYT)

Twitter’s C.F.O. said the social network might invest in Bitcoin, following Tesla and Square (which, like Twitter, is led by Jack Dorsey). Mastercard said it would let cardholders use certain cryptocurrencies in transactions. (Business Insider, Bloomberg)

Tech moguls gave away more money last year than they ever have. But there are still questions about how that money will be used. (Recode)

How Merck, a vaccine giant, lost the race to create a Covid-19 shot. (NYT)

In an op-ed, Nouriel Roubini explains why Bitcoin “doesn’t belong in the portfolios” of serious investors. (FT)