WASHINGTON (Reuters) – The roughly $2 trillion emergency aid package being negotiated in Congress is “scaled about right” to match an economic hit that could throw as many as 46 million people out of work until the coronavirus outbreak is controlled, St. Louis Federal Reserve President James Bullard said on Wednesday. 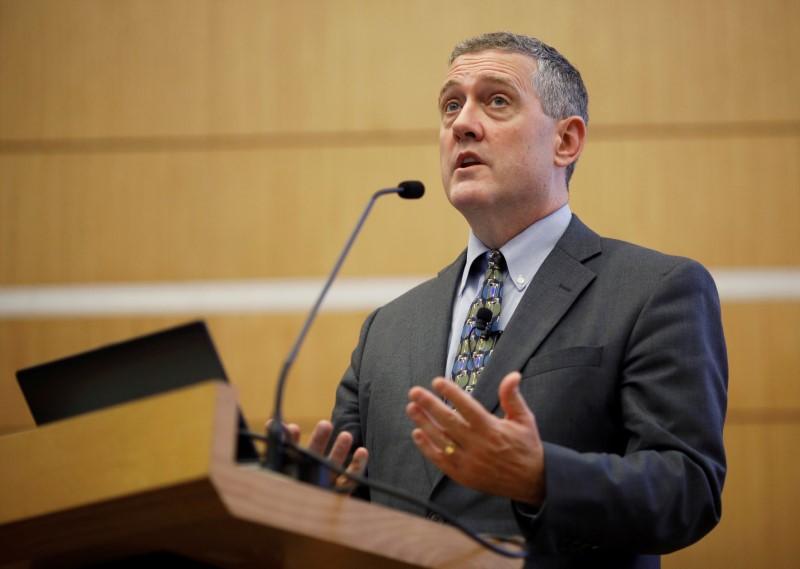 In a series of blunt media interviews in recent days, Bullard has said the U.S. should be prepared to simply “hunker down” in the April to June period, using public programs to keep households and companies financially whole, and not rush back to work until the virus threat has passed.

Any timetable, he said, “depends on the virus,” with the late summer and fall possibly allowing a transition back to a full U.S. economic reopening, and the end of the year and early 2021 offering the chance of a “boom,” as people and companies make up for delayed spending.

That outlook and Bullard’s sobering economic estimates contrast with the more rushed attitude of President Donald Trump, who says he hopes the economy can be “roaring” by Easter, in about two and a half weeks — even as the epidemic threatens to overwhelm public health systems.

The point of the massive economic support programs approved by the Fed and being fine-tuned in Congress is to make any rush back to normal unnecessary, Bullard said, allowing the economic hit to be absorbed in the second quarter of the year and setting the stage for a rebound.

Those steps have helped stabilize volatile U.S. equity markets for the time being. U.S. indexes saw their largest gains in decades on Tuesday as negotiations of the economic rescue legislation progressed, and were mostly higher in morning trading on Wednesday.

Bullard said the focus now should be on rolling out benefits as quickly as possible so households and firms are not left strapped for cash needed to pay for essentials and to meet rent, mortgage and other obligations.

“We have probably put the things in place that need to be in place,” Bullard said of the historic steps the Fed has taken over the last two weeks, and which Congress is expected to approve soon.

“The biggest issue now…is executing in a way that keeps businesses intact and keeps workers with enough of a paycheck to cover expenses.”

Bullard in recent days has rolled out shocking estimates of what may happen in the coming weeks as “social distancing” – in a bid to contain the virus’s spread – shuts down large parts of the U.S. economy.

Perhaps half of expected output will be lost in the April to June period, a hit in the range of about $2.5 trillion, he said, and as many as 46 million “public facing” jobs halted, at least temporarily.