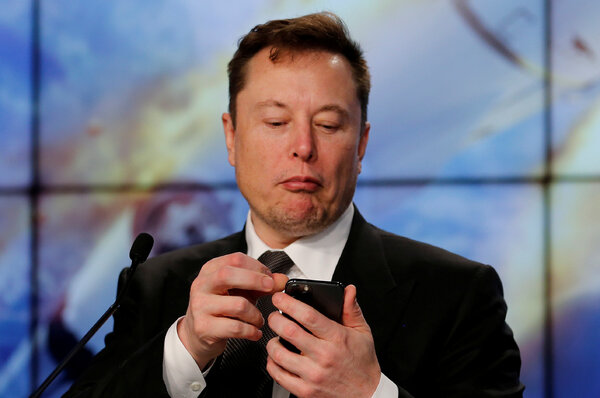 Is this the start of something big?

Cryptocurrency prices are soaring after Tesla said yesterday that it had purchased $1.5 billion worth of Bitcoin with company funds. It also said it would accept payments in the cryptocurrency in the future. Bitcoin’s price, which had already been climbing, promptly set records.

The latest surge stands out for its magnitude. The recent rise has pushed the value of all cryptocurrencies to more than $1 trillion, with the bullishness extending beyond Bitcoin. There appears to be underlying momentum to the market, with more consumer apps allowing users to trade crypto tokens, fund managers moving money into these assets and, now, sizable industrial companies shifting some of their cash to cryptocurrency.

There is still a whiff of the Wild West to all this: Dogecoin, a token that started as a joke, has been embraced semi-seriously by Elon Musk of Tesla and several celebrities, like the rapper Snoop Dogg and the rocker Gene Simmons of Kiss. Its price is up more than 1,600 percent so far this year, propelling it into the top 10 cryptocurrencies by value.

The news is an “exclamation point” for institutional acceptance of Bitcoin, Matthew Graham, the C.E.O. of the Beijing-based blockchain investment firm Sino Global Capital, told DealBook. “It’s clear that Bitcoin is ready for Main Street.” Tom Robinson, the chief scientist and co-founder of the blockchain firm Elliptic, called Tesla’s purchase “hugely significant.” Other experts had similarly positive things to say.

What about buying a Tesla car with crypto? Mariano Conti, a blockchain entrepreneur, has used crypto for collateral on a car loan. He said it would be “great” if Tesla accepted crypto payments, but added: “Most people I know use crypto as a way to hedge against fiat currencies, which we view as inferior, so I expect most people would rather hold their Bitcoin.”

What’s in it for Tesla? Mr. Musk is known for bucking convention, so Tesla’s purchase is not as surprising as it would be at, say, Ford or G.M. Tesla had more than $19 billion in cash at the end of 2020, a big enough cushion to make the crypto purchase a relatively small share of its resources. But much of that cash was raised in recent stock sales, and the company only recently reported its second year of positive free cash flow. Although rising crypto markets make the company’s decision look wise in comparison to holding cash or low-yielding bonds, accounting headaches loom. (In short, Tesla will have to record declines in the value of its Bitcoin against its earnings, but can’t book gains.)

Will other companies follow Mr. Musk’s lead? It doesn’t seem likely, said Naresh Aggarwal of the Association of Corporate Treasurers in London. “Gold is probably a more traditional form of alternative investment,” he said, yet few firms outside the financial sector hold it. “If they’re not tempted by gold, then I can’t see them being tempted by Bitcoin,” he added, likening it to “putting money on a horse race.” Keeping money in liquid, ultra-safe investments is particularly important during the pandemic, and many corporate finance chiefs remember being burned in 2008 by higher-yielding investments, whose volatility looks tame compared to many cryptocurrencies.

That said, Tesla isn’t the only company dabbling in Bitcoin. Most notably, the software company MicroStrategy now holds Bitcoin worth about a third of its market cap; the company’s C.E.O., Michael Saylor, held a conference last week that promoted Bitcoin for corporations. Tesla representatives were reportedly spotted there.

Democrats appear to compromise on stimulus checks. House Democrats rejected efforts to limit the $1,400 payments to those earning $50,000 or less, but they tightened eligibility for those making more than $75,000.

Reddit seizes its moment by raising $250 million. The message board company was valued at $6 billion in its latest funding round, after it gained prominence as the home of internet traders who powered the meme-stock frenzy. Separately, here’s how its five-second Super Bowl ad came to be.

Robinhood is sued by the family of a customer who killed himself. The parents and sister of Alex Kearns, who believed he had racked up huge losses on the trading app, accused the company of aggressive marketing tactics that lured inexperienced traders into making risky trades.

European lawmakers want tech companies to pay news publishers. They are following Australia’s plans to charge Facebook and Google for linking to and hosting content — which has prompted Google to threaten cutting off services to the country. The approach addresses “the acute bargaining power imbalances” between publishers and tech platforms, one lawmaker told The Financial Times.

Clubhouse goes down in China. The audio-based social media platform had grown in popularity among Chinese users as a safe space to discuss taboo topics like human rights abuses. But mainland access to the app disappeared yesterday, suggesting that government censors had finally intervened.

As companies prepare to reopen their offices, they do not expect things to be what they once were. The forced experiment in widespread remote working during the pandemic has highlighted the risks and opportunities of adopting a more flexible approach for employees who don’t always need to be in the office.

The good news: At a recent media briefing, Nat Friedman, the chief of the software code-sharing platform Github, said that remote working had spread opportunity “for productive people all around the world.” He shared unpublished internal data showing a major shift in where programmers worked last year: developers submitting code from tech hubs like San Francisco, New York and Boston all fell more than 40 percent, while the programmer population in places like Houston and Miami grew around 25 percent.

And the bad news: As DealBook has covered before, executives are wary of how remote working might affect company culture in the long run. In its latest annual report, released yesterday, Alphabet noted in its risk factors that “hybrid work models” adopted post-pandemic may have “effects on our ability to compete effectively and maintain our corporate culture.”

Fears about culture are so widespread that they have become legal boilerplate in many corporate disclosures. In the past month, Affirm, FinServ and United Wholesale Mortgage all noted in reports to investors that Covid-19 had led the companies to adopt a remote-working setup, and “over time such remote operations may decrease the cohesiveness of our teams and our ability to maintain our culture, both of which are critical to our success.”

How is the ride-hailing economy holding up?

The pandemic has taken a toll on companies like Uber and Lyft, which are largely powered by people taking trips. As the companies prepare to report earnings this week, The Times’s Kate Conger looks at how they’re doing.

The context: “The second downturn was another setback to hopes that the companies, which have never turned a profit and have historically had annual losses in the billions of dollars, could become profitable this year,” Kate writes.

Their core business is suffering. Uber’s ride-hailing revenue was down about 53 percent in its most recent quarter; Lyft’s was down 50 percent. Drivers have had to spend more on protective equipment and cleaning products, eating into their profits.

Lyft said that driver earnings in some top markets had gone up, because fewer drivers were on the road, reducing competition.

Uber bolstered on its Uber Eats food delivery business, whose revenue more than doubled during the most recent quarter, and has bought other services like Postmates and Drizly. Analysts expect its fourth-quarter revenue to be down 12 percent from a year earlier.

Lyft is still largely reliant on ride-hailing, though it is testing a service transporting medical supplies and groceries. Analysts expect a far bigger drop in revenue — 44 percent — for the quarter.

Senators shine a light on the money trail

Ten Democratic senators are urging the acting solicitor general, Elizabeth Prelogar, to reverse the Justice Department’s position on a Supreme Court case that they say reflects “a long effort to entrench corporate America’s stranglehold on American government.” In a letter that DealBook is the first to report, the senators wrote that the case could result in “a further flood of anonymous money — or ‘dark money’ — into our political system, causing great harm to our democracy.”

In the case, the government sided with the Americans for Prosperity Foundation, a Koch-affiliated nonprofit, which petitioned against the California tax authorities. In the Justice Department’s brief, submitted in November, it argued that donors had a First Amendment right to remain anonymous in order to avoid “harassment, reprisals and similar harms.” Other groups filed earlier briefs using the same arguments. Of these, the senators singled out the U.S. Chamber of Commerce for embracing what they called an “extreme constitutional theory.” The Chamber said after the Capitol riot that it would re-evaluate donations from its powerful PAC.

New briefs are due soon, and will reveal whether the Justice Department, now under new management, maintains its current stance. The Supreme Court agreed on Jan. 8, two days after the Capitol riot put a spotlight on money in politics, to add the case to its docket. A result in favor of the petitioners would bolster anonymous donations, to the senators’ chagrin.

The C.E.O. of the Singaporean sovereign wealth fund Temasek, Ho Ching, is stepping down after a decade in the role. (FT)

A clash between centrist and left-leaning economists could shape the U.S. economy and the political fortunes of the Biden administration. (NYT Upshot)

The U.S. risks falling behind in the 5G race by not requiring service providers to build the necessary infrastructure, Eric Schmidt, the former Google chief, writes in an op-ed. (FT)

For the wine world, 2021 is once again all about the pandemic, tariffs and climate change. (NYT)

McKinsey might still profit from its $574 million settlement over its role in the opioid crisis. (NBC News)

Wes Moore, the C.E.O. of the Robin Hood foundation — no, not that Robinhood — is stepping down after four years and $650 million in proceeds raised for the antipoverty group. (Robin Hood, WSJ)