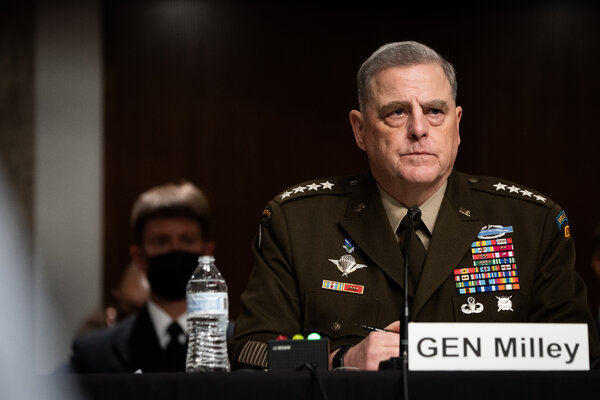 Gen. Mark Milley, the most senior U.S. military commander, defended his actions in the final months of the Trump administration and warned of the “very real possibility” that Al Qaeda and ISIS could rebuild in Afghanistan, following the withdrawal of U.S. troops.

In testimony to lawmakers on Tuesday, Milley insisted that calls he made to his Chinese counterpart last year and a meeting in which he told U.S. generals to alert him if the president tried to launch a nuclear weapon were all part of his job as the country’s most senior military officer.

Top military officers acknowledged publicly for the first time that they had advised President Biden not to withdraw all U.S. troops from Afghanistan. They said the collapse of the Afghan army took commanders by surprise.

Milley, the chairman of the Joint Chiefs of Staff, said that a reconstituted Al Qaeda or ISIS in Afghanistan “with aspirations to attack the United States is a very real possibility.” He added, “And those conditions, to include activity in ungoverned spaces, could present themselves in the next 12 to 36 months.”

Drone strike: After a Times investigation found that a U.S. drone strike in Kabul on Aug. 29 killed 10 civilians, senators got a chance to ask top military officials directly what went wrong.

Who will be Japan’s next prime minister?

Polls show that the Japanese public favors Taro Kono, the cabinet minister who oversees Japan’s coronavirus vaccine rollout, to be the next prime minister. He is ahead of other candidates in the race to lead the governing Liberal Democratic Party — which, in effect, is the race to become prime minister.

Party members will vote Wednesday to choose a successor to Yoshihide Suga, the current prime minister and party leader.

But in the back rooms, Kono, 58, does not have nearly as much support. His reputation as a nonconformist and his left-leaning views on social issues put him out of step with the party’s conservative elders, who hold considerable sway.

Details: Kono has courted public opinion, posting playful tweets and even personally responding to vaccine questions online. He opposes nuclear power and supports same-sex marriage, positions that put him on the wrong side of many party members.

Competitors: Sanae Takaichi, 60, a hard-line conservative, would be Japan’s first female prime minister. She has strong backing from the party’s right wing and from former prime minister Shinzo Abe. Many party members think Fumio Kishida, 64, a moderate with tepid support in the polls, is the safest choice.

The pandemic: Japan is ending its state-of-emergency measures on Thursday as the number of new daily coronavirus cases has dropped and the vaccine rollout has reached nearly 60 percent of the population.

Pfizer and BioNTech said on Tuesday that they had submitted data to U.S. regulators that the companies said showed that their coronavirus vaccine is safe and effective in children ages 5 to 11.

The companies said that they would submit a formal request to allow a pediatric dose of their vaccine to be administered in the U.S. in the coming weeks. Similar requests will be filed with European regulators and in other countries.

About a week ago, Pfizer and BioNTech announced favorable results from their clinical trial with more than 2,200 participants in that age group.

Xu Jiayin was China’s richest man, a symbol of the country’s economic rise. Now Beijing has signaled that it will no longer tolerate the strategy that turned his company, Evergrande, into a real estate powerhouse, pushing it to the precipice.

The Taliban banned women from working or studying at Kabul University.

North Korea fired a short-range missile, the South Korean military said, just as its envoy to the U.N. called on the U.S. to end its “hostile” policy toward his country.

China allowed an American brother and sister to return home after three years. Their release comes a few days after a U.S. deal allowed a Huawei executive to go back to China.

Britain is facing a gas crisis, amid a shortage of truck drivers.

The defeat of Chancellor Angela Merkel’s Christian Democratic Union in Germany has left the party in disarray and raised worries about the conservative movement’s long-term survival.

Canada doubled the number of Afghan refugees it planned to take in to 40,000, the Canadian foreign minister said on Tuesday.

U.S. Senate Republicans blocked a bill that would avert a government shutdown and prevent the country from defaulting on its debt.

Stephanie Grisham, the former Trump White House press secretary, is releasing a tell-all book that accuses former President Trump of abusing his staff, placating dictators like Vladimir Putin of Russia, and making sexual comments about a young aide. Her publisher calls the book “the most frank and intimate portrait of the Trump White House yet.” We have some highlights from the manuscript.

At a recent concert in the Royal Albert Hall in London, nearly 6,000 attendees gathered wearing a mix of suits, ties and video game character cosplay. They had come to see an orchestra and choir perform music from Final Fantasy VII, released in 1997.

The music in the first installment of the Final Fantasy series in 1987 was limited to a handful of electronic sounds. But technology evolved, and by the late 1990s, the games featured live orchestral recordings. Nobuo Uematsu, who composed scores for the first nine installments of Final Fantasy, has drawn on influences as varied as Led Zeppelin, Elton John, Celtic music and classical music.

The soundtracks to the Final Fantasy series are enormously popular: Since 2007, there have been more than 200 official concerts across 20 countries. At the opening ceremony of the Tokyo Olympics this summer, some athletes marched to Final Fantasy songs. On YouTube, fans post covers, tutorials and their own compositions.

“There are some melodies I composed almost 30 years ago I’ve almost forgotten,” Junya Nakano, who worked with Uematsu on the score for Final Fantasy’s 10th installment, said. “But fans are still playing them.”

You’ll want to eat this shrimp gratin straight out of the pan.

In Jonathan Franzen’s new novel, “Crossroads,” the members of a suburban Chicago family headed by a pastor confront crises of faith and morality.

World Through a Lens

In southern Mexico, the Zapotec people have long accepted — and celebrated — gender nonconformity. Our travel section has these portraits of the community.

Here’s today’s Mini Crossword, and a clue: Plump up, as a pillow (five letters).

That’s it for today’s briefing. And a correction: Yesterday’s briefing incorrectly described the number of women running to be Japan’s next prime minister. There are two, not four.

See you next time. — Melina

P.S. The Times introduced the Headway team, which will investigate significant national and international challenges through the lens of progress.

The latest episode of “The Daily” includes a conversation with an Afghan general.

Sanam Yar wrote the Arts and Ideas section. You can reach Melina and the team at briefing@nytimes.com.