We’re covering the E.U.’s vaccination woes, Biden’s plans for the climate crisis and protests over Poland’s near-total ban on abortion. 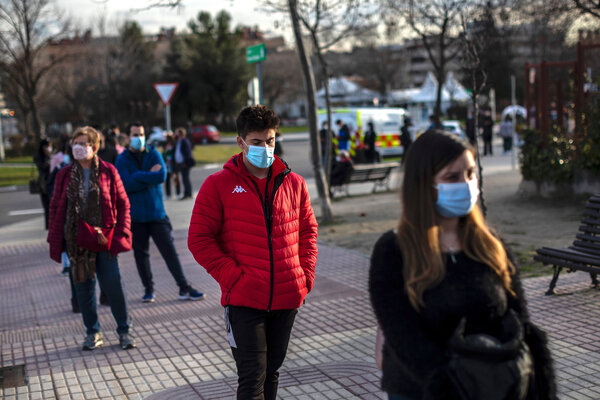 Europe’s coronavirus vaccination woes snowballed yesterday as Spain became the first country to partly suspend immunizations because of a lack of doses. Madrid has paused inoculations for two weeks, and Catalonia may follow suit.

Though the European Union is flush with cash and influence, it has found itself behind Britain and the United States, as well as other nations like Israel, Canada and the United Arab Emirates, in trying to secure enough doses for its people, even as many countries, particularly poorer ones, struggle to obtain any at all.

In response to the drugmaker AstraZeneca’s announcement that it would slash deliveries of its vaccine by 60 percent because of production shortfalls, the E.U. urged the company to supply it with doses from British plants, according to a BBC report.

Details: The European Commission, the bloc’s executive branch, last week set a goal of having 70 percent of its population inoculated by this summer, a target that was dismissed four days later by the president of the European Council, Charles Michel, as “difficult.”

Related: Britain, which has vaccinated more than 10 percent of its population, tightened its international travel restrictions. It now requires citizens arriving from any of 22 high-risk countries to quarantine in hotels for 10 days at their own expense.

Hospitals and nursing homes that have reused scarce protective equipment appear to have helped spread a different set of germs: drug-resistant bacteria and fungi.

Moscow’s mayor lifted most of the city’s remaining restrictions, claiming that the pandemic was easing there. But Russia has been hit hard, and officials have faced questions over the true scale of its outbreak.

Hundreds of survivors of the Holocaust are set to be vaccinated this week in Austria and Slovakia as part of vaccine drives organized in observance of the 76th International Holocaust Remembrance Day.

South Africa has given emergency approval to the Oxford-AstraZeneca vaccine and is reviewing applications from rival manufacturers.

President Biden signed a sweeping series of executive actions related to the climate crisis yesterday — from pausing new federal oil leases to electrifying the government’s vast fleet of vehicles — while casting the moves as benefiting American workers as much as the environment.

He argued that these steps, rather than resulting in job losses, would instead create work in building the necessary wind and solar infrastructure. Using the government’s purchasing power to buy zero-emissions vehicles, Mr. Biden said, would help speed the transition away from gasoline-powered cars and ultimately lead to “one million new jobs in the American automobile industry.”

Quotable: “In my view, we’ve already waited too long to deal with this climate crisis. We can’t wait any longer,” said Mr. Biden. “We see it with our own eyes. We feel it. We know it in our bones. And it’s time to act.”

More from Washington: The Biden administration warned that the U.S. will face shortages of personal protective gear and other essential supplies unless Congress quickly passes Mr. Biden’s $1.9 trillion relief bill.

Jan. 6 breach: The U.S. faces heightened threats from violent domestic extremists emboldened by the Capitol riot, according to a rare national terrorism warning.

Thousands of outraged women, teenagers and allies returned to the streets of Poland last night, after word that a ruling that halts the termination of pregnancies for fetal abnormalities — virtually the only kind of abortion performed in the country — would come into force.

Though the decision had been made in October by the Constitutional Tribunal, its implementation was delayed after it prompted a month of protests. Yesterday, the government abruptly announced that the ruling was being published in the government’s journal, meaning it went into effect.

Poland already had one of Europe’s most restrictive abortion laws, with the procedure legal in only three instances: fetal abnormalities, pregnancies resulting from rape or incest, and threats to a woman’s life. The latter two remain legal.

Slogans: The protesters chanted “I think, I feel, I decide!” and “Freedom of choice instead of terror!” In Warsaw, they marched to the headquarters of the governing Law and Justice Party to songs including “I Will Survive.”

If you have 12 minutes, this is worth it

A history of modern white supremacy

Forty years ago, Louis Beam, above, a former grand dragon of the Texas Knights of the Ku Klux Klan, had the idea of using the internet to drive a movement.

The strategies that he and his contemporaries set in motion persist to this day — and law enforcement and the general public are still battling his vision for white nationalism on platforms like Gab, 8chan and Parler. Here’s how it happened.

Here’s what else is happening

Boeing’s worst year ever: The plane manufacturer lost more than $11.9 billion last year as it struggled to overcome the crisis surrounding its 737 Max jet and was hit by the slowdown in global aviation caused by the coronavirus pandemic.

Brexit: British ports had expected some gridlock after post-Brexit trade laws went into effect, but truckers have been so reluctant to deal with the headaches of new documents that many ports have been nearly empty.

Markets report: Wall Street suffered its sharpest daily decline in months as the Federal Reserve issued a glum assessment of the economy. Separately, a troubled U.S. video game retailer’s stock has skyrocketed 1,700 percent this month, thanks to amateur traders who organized an online campaign to boost the shares.

Snapshot: Above, a mako shark caught by fishermen just outside Sydney Harbor, Australia. Numbers of oceanic sharks and rays have declined more than 70 percent since 1970, mainly because of overfishing, according to a new study. Experts warn there is a “very small window” to save the sharks and rays.

Cannes: The renowned Cannes Film Festival has been rescheduled from May to July, showing the continuing impact of the coronavirus pandemic.

Punk hair: The intricate art of hair tattooing reimagines the buzz cut as a blank canvas.

What we’re reading: This New Yorker article asks a question on many of our minds: Has the pandemic changed the office forever?

Now, a break from the news

Cook: This vegan pasta coaxes astonishing flavor and texture out of just a few leeks, a box of pasta, some olive oil and lemon.

Watch: The Netflix documentary series “Pretend It’s a City.” Fran Lebowitz shares stories about her life and insights about New York through the lens of her longtime friend Martin Scorsese.

Read: From show-business biographies to an environmental treatise by Bill Gates, check out 13 new books for February.

Give yourself a boost. At Home has our full collection of ideas on what to read, cook, watch and do while staying safe at home.

And now for the Back Story on …

Giving the Oscars a face-lift

This year’s Academy Awards are still scheduled for April — though no one much knows what they’ll look like. (Our film critic A.O. Scott has a few ideas on how to move beyond business as usual.) We asked movie industry insiders what they would change. Their ideas ranged from the charming to the highly unlikely.

Nell Scovell, comedy writer whose credits include “The Simpsons” and “Late Night With David Letterman.”

To add excitement to the [best-picture category], I propose the Oscars adopt a Miss Universe type of finale. … And maybe we add a clause that if it turns out one of the producers is a rapist, then they lose [the award] and the runner-up gets to be the best-picture winner for that year.

The experience of being in the room during the Oscars is strikingly different from the experience of watching it on television. Part of my heart wants to go back to it being a dinner with just the nominees and the presenters. [Or] a Zoom broadcast. [With the Emmys this year] there was an intimacy to seeing people as they truly are in their homes and who they chose to be with and how they chose to be with them. That was really exciting.

Peter Mehlman, a former writer and producer of “Seinfeld.”

Let’s face it. The subtext of every Oscar night is, Wow, look how much better our lives are than yours. Hollywood should give up on the idea that everyone aspires to be us. Maybe this year instead of black tie they should tone it down to office casual. And do we really still need a red carpet? Can these people not stand on a sidewalk now?

That’s it for this briefing. See you Friday.

Thank you
Theodore Kim and Jahaan Singh provided the break from the news. You can reach the team at briefing@nytimes.com.

P.S.
• We’re listening to “The Daily.” Our latest episode is on the trend of U.S. coronavirus cases falling, and whether it will last.
• Here’s our Mini Crossword, and a clue: “Mind. Blown.” (five letters). You can find all our puzzles here.
• Cliff Levy, a two-time Pulitzer Prize winner who has led the Metro desk since 2018, will be returning to The Times’s senior masthead as deputy managing editor.