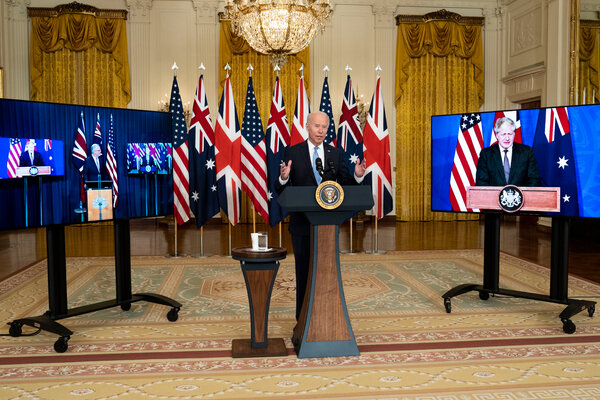 A post-Brexit Britain’s moment on the global stage

A maritime security alliance between Britain, the U.S. and Australia has caused anger and recrimination across three continents, bringing relations between France and the U.S. to their lowest point in decades. Britain has emerged as the unlikely winner of the agreement.

Since leaving the E.U. 18 months ago, Britain has cast about for a place in the world. By playing an early role in brokering the deal, the country confirmed its status as a military power with nuclear expertise, as well as a trusted ally of the U.S.

For Boris Johnson, the British prime minister, it was a first tangible victory in a campaign to make post-Brexit Britain a player on the global stage, lending credibility to his effort to build a British presence in Asia, a strategy that at first looked mostly like a nostalgic throwback to its imperial past.

Analysis: “It does for the first time start to flesh out Global Britain,” said Kim Darroch, a former British ambassador to Washington. “We’re starting to build a real presence, in the defense and economic spheres, in that part of the world.” But joining a far-flung security alliance also imposes costs on Britain, which is downsizing its military and has had its public finances ravaged by the pandemic.

Recall: France announced on Friday that it would withdraw its ambassadors to the U.S. and Australia in protest of the deal. Its ambassador in London was not removed, a signal that Britain is seen by France as a subordinate player in the plot, rather than a ringleader.

Imperial march: The British government has announced plans to allow shops to sell goods in pounds and ounces, rather than using the metric system, as part of an effort to “capitalize on new Brexit freedoms,” the minister overseeing Brexit said.

Early results in Russia’s parliamentary elections over the weekend showed a rise in opposition to the governing party run by Vladimir Putin — even as the party is expected to cruise to victory.

The vote came amid a harsh crackdown on dissent by the Kremlin and murmurings of popular discontent. Russian elections are not free and fair, and Parliament’s role in recent years has mainly been to rubber-stamp the Kremlin’s initiatives while providing a veneer of democratic legitimacy to Putin’s rule.

Apparently fearing a rebuke at the ballot box, the authorities barred just about all well-known opposition figures from running for Parliament, while forcing many dissidents into exile and declaring popular independent media outlets to be “foreign agents.” Videos of ballot stuffing and other apparent instances of fraud circulated widely on social media.

Partial results: As of yesterday, Putin’s United Russia party was carrying 44 percent of the vote, 10 percentage points less than in the previous election in 2016. In second place, the Communist Party had received 22 percent, compared with 13 percent in 2016.

Interference: Under pressure from Moscow, Apple and Google removed an app on Friday meant to coordinate protest voting in the Russian elections. Opposition activists said Google also took down videos and documents they had been using to organize a protest vote.

Madrid will remove most of its pandemic restrictions today amid a general easing of lockdown rules in Spain, after the country’s coronavirus infection rate fell to its lowest level in more than a year.

Restaurants and bars in the capital region will be able to stay open as late as their licenses allow, while shopping malls, cinemas and theaters will no longer have to apply capacity limits. Only a few restrictions will remain in Madrid, including limits for restaurants — 10 people per outdoor table, up from eight — and for nightclubs, which can operate at 75 percent capacity.

Tourism in Spain, which has maintained only limited travel restrictions over the summer, is expected to increase after London announced last week that it would stop requiring vaccinated visitors to be tested for the coronavirus before returning to Britain. The switch also benefits other European countries that rely on British tourism, such as France, Italy and Portugal.

By the numbers: This past week, Spain’s 14-day infection rate fell below 100 cases per 100,000 inhabitants, the lowest since August 2020. As of Friday, 35.8 million residents, more than 75 percent of the population, had been fully vaccinated, giving Spain one of the largest vaccinated populations in Europe.

New data indicates that the level of protection against Covid-19 hospitalizations provided by the Pfizer-BioNTech vaccine dropped significantly in the four months after full inoculation.

French perfumers, sommeliers and winemakers with coronavirus infections are sometimes deprived of a crucial tool: their high-performing noses.

Dr. Anthony Fauci, the top U.S. health official, urged vaccinated Americans not to get a Covid booster shot until they are eligible.

After the pandemic’s third wave in Senegal, more people want to get a shot.

A volcano on the Spanish island of La Palma spewed lava and a thick column of smoke yesterday, prompting the authorities to evacuate thousands of residents from nearby towns.

Haiti has asked the U.S. to stop deporting Haitian migrants to their home country because the island nation is in crisis and cannot handle thousands of homeless deportees.

News From the U.S.

The 73rd annual Emmy Awards took place last night. Above, Jason Sudeikis, who won best actor in a comedy for his title performance in “Ted Lasso.” Here’s the full list of winners — and some of the best red carpet looks.

Senator Joe Manchin is a crucial swing vote in the Democrats’ sweeping budget bill. He will also write the details of its climate change program, notwithstanding his close ties to the fossil fuel industry.

With abortion rights under threat, Democrats believe they can use the issue to turn out suburban women in the Virginia governor’s race this fall and in the 2022 midterm elections.

Two and a half years after a devastating fire, the Cathedral of Notre-Dame in Paris has been secured enough to start the rebuilding process, which is expected to be completed in 2024.

John Nkengasong, the first director of the Africa Centers for Disease Control, is on a mission to turn the continent’s public health around.

Inspiration4, a billionaire-led space mission with no professional astronauts in its crew, successfully returned to Earth.

Even after Angela Merkel ceases to be Germany’s chancellor, namesakes will keep her legacy alive.

Some refugee families who traveled to the country during the migrant crisis of 2015 and 2016, like the Al Abdi family, above, chose to show their gratitude for her decision to welcome them by naming a child after her: Angela, Angie and sometimes even Merkel.

This 39-foot-long instrument, built by local artisans and made from about a dozen different kinds of wood, sets a course for the future, writes Elisabetta Polevedo for The Times. “The violin is a sign of Venice restarting,” said Livio De Marchi, a Venetian artist who conceived of the idea during the lockdown last year.

De Marchi named the work “Noah’s Violin” because, like the ark, it is meant to bring a message of hope after a storm, in this case a message that promotes “art, culture and music,” he said.

The violin itself is a nod to Vivaldi, who was a native of Venice and is venerated there. De Marchi said that he regretted not having learned to play an instrument. Creating the gigantic simulacrum was the next best thing, he said.

Read more about the phantasmagorical vessel.

This herby Gruyère soufflé is as classic as they come.

A coproduction from Netflix and Canal+, “On the Verge” is a sometimes absurd and yet all-too-real comedy that follows four friends as they grapple with middle age.

Check out our list of 20 new works of fiction to read this fall.

That’s it for today’s briefing. Thanks for joining me. — Natasha

P.S. The Times published its first issue (as the “New-York Daily Times”) 170 years ago on Saturday. Each copy cost 1 cent.

The latest episode of The Daily is on the return of Broadway.