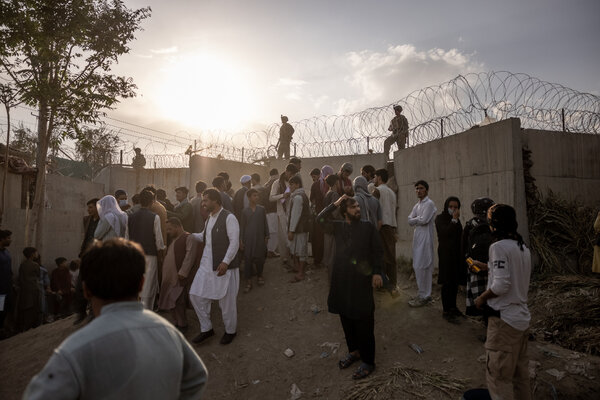 President Biden said on Sunday that his administration might extend his Aug. 31 deadline for removing all American troops from Afghanistan, and he pledged that all evacuated Afghan allies would be given a home in the U.S. after they were screened at bases in other countries.

“We will welcome these Afghans who have helped us in the war effort over the last 20 years to their new home in the United States of America,” Biden said at the White House.

At the Kabul airport, the situation grew increasingly dire: Crowds have trampled people to death, including a 2-year-old girl. ISIS also poses an “acute” threat to the evacuation, the U.S. national security adviser warned.

Some interpreters and journalists, after terrifying attempts to fight past Taliban gunmen and unruly mobs to secure flights, have given up trying to escape the country. “I’ve lost hope,” one man said.

Global response: Group of 7 leaders will meet virtually on Tuesday to discuss the crisis. Britain, the U.S. and Germany voiced support for the refugees, while France’s president, Emmanuel Macron, wanted the influx to be limited.

Plan in shambles: Biden had promised an orderly withdrawal. Interviews with key participants in the last days of the war show a series of misjudgments and miscalculations that led to the chaos.

The Delta variant of the virus is surging in the Gulf Coast, a tourist haven that brings crowds to beaches across several Southern states. Low vaccination rates and lax safety measures are worsening matters.

Even compared to the high virus numbers in the U.S. South, the Gulf Coast stands out. The average per person hospitalization rate for Panama City, Fla.; Mobile, Ala.; and Gulfport, Miss.; is considerably higher than that of their states as a whole, even though they are three of the four states with the highest rates in the country, according to data compiled by The Times.

The per person average case rates in the surrounding counties are all more than twice the national average. The vaccination rate in all three counties is well below 40 percent, according to federal data.

Those filling up the hospitals are no longer the older populations who were most vulnerable in earlier waves; the variant is spreading among younger people, many of whom thought they had nothing to fear and did not get the Covid vaccine.

Quotable: “We’ve had 44-year-olds, 45-, 35-, that have died,” said one hospital administrator in coastal Mississippi. “I’ve been a nurse for 15 years, and I’ve never seen anything like it.”

In other virus news:

The U.S. drug regulator could give full approval to the Pfizer-BioNTech vaccine as early as Monday. Experts and medical professionals hope the full approval will raise vaccination rates.

The British government is starting an antibody surveillance program for adults who test positive for the coronavirus to develop a better understanding of its vaccine campaign and of the virus variants.

The latest heat wave in Athens reached up to 44 degrees Celsius, or 111 Fahrenheit, a record that only increased the urgency that she brings to her job as the city’s — as well as Europe’s — first “chief heat officer.” New wild fires also broke out this past week, adding to 200,000 acres of forests consumed by blazes in Greece.

“Heat is an invisible and insidious killer,” Myrivili said. She plans to develop stronger warnings for heat waves, give more people access to air-conditioning and outfit buildings with materials that cool residents.

Across Europe, the urgency is clear: Sicily recorded what appears to be the hottest day on record for the entire continent, and fires and flooding have plagued several countries over the summer. Every week there is a new nightmare.

The American-born singer and dancer Josephine Baker, above, will be laid to rest at the Panthéon in Paris, making her the first Black woman to get one of France’s highest honors.

Nando’s, a beloved restaurant chain in the U.K., is facing a chicken shortage so severe it forced nearly 50 stores to temporarily close over the past week.

Amid a state crackdown on the press in Russia, we spoke to journalists from Meduza, an independent news site, who are using reader contributions and jokes about their situation to stay afloat.

Michele Crippa’s palate was renowned in Italy’s gastronomic circles, and then Covid took away his sense of smell. Now, after retraining himself over months, he has designed a therapy course with food scientists to help others do the same.

Thousands of activists in Belarus are working clandestinely to spread dissent despite a government campaign of terror.

Tropical Storm Henri battered the U.S. Northeast on Sunday, bringing thick bands of heavy rain, flash flooding and powerful winds, like on Long Island, above. Hurricane Grace landed in Mexico on Saturday as a Category 3 storm near Tecolutla, leaving eight people dead. It quickly weakened to a tropical storm.

Rain fell at the highest point on Greenland’s ice sheet for the first time on record, another sign of the effects of climate change.

Officials are examining whether the assassination of Haiti’s president was tied to the drug trade, as his security commander was already a suspect in a major trafficking case.

Ethiopia is enlisting civilians to fight in the war in the Tigray region, a campaign that critics say threatens to spread the conflict to the wider region.

A team of experts, with the help of local residents and the authorities, is trying to revive an ancient olive tree in western Sardinia that was engulfed in a catastrophic wildfire. Over the course of its long life — an estimated 1,800 to 2,000 years — the tree grew to have a trunk 3.4 meters, or 11 feet, wide.

The live coverage format, which allows journalists to share the news as they learn it, has become a familiar tool at The Times for reporting big events. So far this year, the newsroom has published more than 800 live stories.

Front-page news events are obvious candidates for live coverage. But The Times has offered live coverage of the Grammy Awards, the National Spelling Bee, the Olympics, even Meghan Markle and Prince Harry’s interview with Oprah Winfrey.

“Anything people want to know information about immediately is a good fit,” Traci Carl, a deputy editor on the Live team, told Times Insider.

The Times mainly uses two types of live formats. A fast-moving blog, which allows for short comments by reporters interspersed with concise reported items, a format used for the Derek Chauvin trial and the Emmy Awards. Briefings, which have an index of their entries at the top, “are more of a synthesis of a big story, a little higher altitude,” Marc Lacey, an assistant managing editor who leads the Live team, said.

“A blog is like a fire hose of news,” Melissa Hoppert, a deputy editor for the team, said. “A briefing is a curated experience with takeaways at the top: Here’s what you need to know if you read only one thing on the subject all day.”

The reader demand for live coverage, especially the coronavirus briefing, which started on Jan. 23, 2020, and recently surpassed 900 million page views, led The Times to create the Live team.

Producing the daily live briefings requires collaboration among dozens of editors, reporters and researchers around the world: The coronavirus briefing, for instance, is a 24-hour relay involving multiple time zones and three hubs: in Seoul, London and New York.

The broth in this elegant, comforting pressure cooker beef pho comes together in under an hour.

The Netflix series “The Chair” is a sharp satire of academia, touching a number of third rails, and somehow also a hilarious rom-com.

Is aloe a sham? Some evidence suggests it might help soothe a sunburn, but the research is thin, and there’s not always a guarantee that what you’re buying is real.

Here’s today’s Mini Crossword, and a clue: About 3.5% of the weight of seawater (four letters).

You can find all of our puzzles here.

That’s it for today’s briefing. Thanks for joining me. — Melina

P.S. We wrote about how The New York Times and The Washington Post evacuated their employees from Afghanistan.

The latest episode of “The Daily” is about Apple’s new tools against child abuse imagery.

You can reach the team at briefing@nytimes.com.