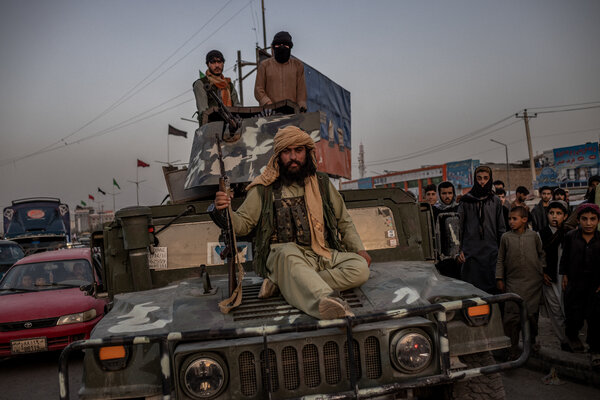 Taliban fighters poured into Kabul amid scenes of panic and chaos yesterday, bringing a swift and shocking close to the Afghan government and the 20-year American era in the country. Afghanistan’s capital fell to the Taliban far faster than many had imagined it would, leaving most Afghans with no way out. Here are live updates.

President Ashraf Ghani of Afghanistan has fled the country, and a council of Afghan officials said it would open negotiations with the Taliban over the shape of the insurgency’s takeover. By the end of Sunday, the insurgents had all but officially sealed their control of the entire country.

The U.S. has raced to evacuate diplomats and civilians, while thousands crammed into the civilian domestic terminal at the airport, desperately seeking flights out. Lawmakers pressed the Biden administration on how intelligence could have failed so badly and how long the military would help hold the Kabul airport. Here are pictures.

Context: The Taliban started their offensive in May as the U.S. began withdrawing troops and quickly overwhelmed the Afghan military, which the U.S. spent more than $83 billion to support over the past two decades. They swept through the country with stunning speed: Mazar-i-Sharif, the last major city in the north, fell just a day before Kabul.

Kunduz: The northern city, which fell last Sunday after heavy fighting, offers a chilling prophecy for the country. Days after the new insurgent leaders said they had no quarrel with the people, residents now say they are living in fear.

View from Washington: The fall of Kabul has left the Biden administration facing the once-unthinkable prospect of whether, and how, to engage with a Taliban-led government — or cede all influence in Afghanistan to the brutal extremist group.

News analysis: President Biden will go down in history, fairly or unfairly, as the president who presided over a humiliating final act in the American experiment in Afghanistan, seven months into an administration that had seemed to exude much-needed competence.

Haitians struggled with a lack of food and medical care in the aftermath of a magnitude 7.2 earthquake on Saturday that snapped water lines, wrecked infrastructure and killed at least 1,300 people. An untold number of people are missing, raising fears that they have been trapped under fallen buildings. Follow updates here.

The powerful earthquake was a devastating blow to a country that is still reeling from a presidential assassination last month and that never recovered from a disastrous quake more than 11 years ago.

Two cities, Les Cayes and Jeremie, located in Haiti’s southern peninsula, have reported major devastation. Phone lines were down in Petit Trou de Nippes, the epicenter of the quake. No news emerged immediately from that city, leaving Haitian officials to fear the worst. Here’s what you need to know.

‘I’m the only surgeon’: With just a few dozen doctors available in a region that is home to one million people, the quake aftermath has turned increasingly dire.

Complications: Tropical Storm Grace, which is expected to pass over the island today, may hinder rescue efforts and risks exposing people to further devastation, according to the main U.S. foreign aid agency.

German officials classified the U.S. as “high risk” because of the rising number of coronavirus cases in the country, with 186,840 new infections reported on Friday. Tourists and nonessential travelers from the U.S. will have to quarantine for 10 days if they cannot document full vaccination or immunity from a past infection. Turkey and Israel were also reclassified as high risk.

Among Americans under 50, average daily hospital admissions have hit a pandemic high. Coronavirus cases in the U.S. have steadily risen since early July, driven largely by the more contagious Delta variant of the virus. Germany has averaged about 3,000 new cases per day in the past seven days, according to a New York Times database.

Related: The U.S. has maintained its ban on European travelers since the early days of the pandemic.

Biden administration officials are developing a plan to start offering Covid-19 booster shots to some Americans as early as this fall.

The Texas governor can ban mask mandates, at least for now, after the Texas State Supreme Court granted an emergency stay of a ruling that would have allowed mandatory face coverings in schools.

Across Indonesia, children have fallen victim to Covid-19 in alarming numbers, with a striking increase since the Delta variant began taking hold.

The leader of Zambia’s main opposition party sailed to victory in the nation’s presidential election, staving off strong-arm tactics from the incumbent governing party that had stoked fears of a rigged vote.

Fears of arrest have driven most of Hong Kong’s pro-democracy politicians to quit. Those who remain in office are worried about retaliation from Beijing.

An investigation concluded that a mysterious nongovernmental group opposed to the Iranian government was most likely behind a July cyberattack on the country’s railroad system.

Almost a week after flash floods roared across northern Turkey, the death toll rose to 59, with dozens of people still missing and many villages still cut off.

Amid an escalating confrontation with the Western news media, Russia is expelling a BBC correspondent.

Britain’s governing Conservative Party is being battered by a litany of accusations of influence-peddling, cronyism and profiteering.

The latest installment of “OSS 117,” a French spy spoof movie series featuring a clueless, racist and sexist hero, has cast to the forefront an increasingly heated debate in the nation over humor.

Some find “Madonna of the Long Neck” weird and contrived. But there’s more than one way to look at contrivance — and there can be value, and even beauty, in going overboard.

This interactive takes a close look at the altarpiece by Parmigianino, among the greatest and strangest painters to emerge in the first half of the 16th century.

The Tokyo Olympics ended on a celebratory note and the Paralympics start next week, but Japan is still struggling. Coronavirus infections are at a high, and just 36 percent of residents are fully vaccinated. To get a sense of the post-Games mood, The Morning, one of our sister newsletters, spoke to Motoko Rich, our Tokyo bureau chief.

There is a sense of cognitive dissonance. In the morning when I watch the news, commentators talk about an increasingly urgent sense of crisis. But the streets and trains are fairly busy. People are going to work in offices and eating lunch in restaurants, drinking coffee in cafes and shopping in stores, though nearly everyone wears a mask.

Polls found that the Japanese public did not support these Olympics at the start. Did people warm to them?

Once the Games started, public sentiment softened. There were still protests throughout the Games. But for many, it seems the drama of the Games diverted people’s attention away from their pre-Olympics anxiety.

What do you think will be the legacy of this year’s Games?

I am guessing there will be a reckoning for the entire Olympic movement about the cost and sacrifices of serving as a host city. An increasing number of countries are pulling out of bidding for the Games. And with both the likelihood of future pandemics and the reality of climate change hovering over everything we do, those forces are inevitably going to shape future Games.

This tender cake has a fine, moist crumb and deep marzipan flavor that comes from a combination of homemade almond paste and a touch of almond extract.

For action fans seeking out new movies on streaming, here are five standouts among the car chases, explosions and fist fights.

In “Four Thousand Weeks,” a self-help book skeptical of self-help, Oliver Burkeman offers perspective on how we might spend the fleeting time that we get.

That’s it for today’s briefing. Have a great Monday. — Natasha

P.S. Liz Day, co-creator of the “Framing Britney Spears” documentary, joined the Today show to discuss the decision by Britney’s father to step aside as conservator of her estate.

The latest episode of “The Daily” is about the U.N. climate report.