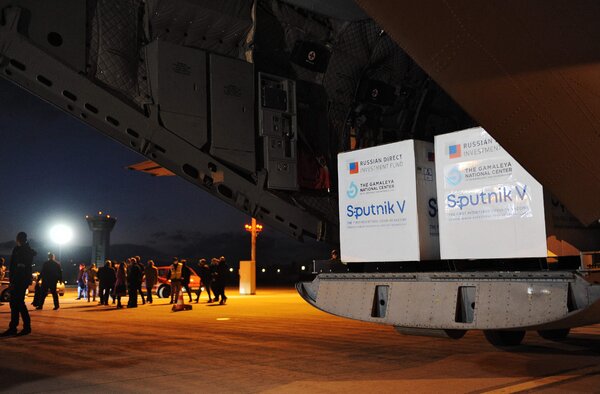 Russia’s Sputnik V vaccine, the first in the world to be registered, has been spreading disarray and division in Europe.

When Igor Matovic, the Slovakian prime minister, ordered two million doses of the Russian vaccine to fight Slovakia’s coronavirus outbreak, his effort soon blew up in his face, costing him his job and almost toppling the whole government — just three months after Slovakia adopted a new security strategy rooted in unequivocal support for NATO and wariness of Russia.

Instead of receiving plaudits, Matovic was accused of cutting a deal with Russia behind ministers’ backs, breaking ranks with the European bloc and succumbing to what his foreign minister described as a Russian “tool of hybrid war” that “casts doubt on work” with the E.U.

Details: Similar altercations have occurred across Europe: Conversations between the French and Russian leaders over potential orders were subsequently derided by France’s foreign minister, who called the vaccine a “propaganda tool.” And the leaders of Austria and Germany have clashed over the E.U.’s failure to register the jab. The bloc has urged member states to hold off on orders until approval is granted.

World virus cases are hitting record levels. The average daily rate of new cases has been above 800,000 for more than a week.

India received desperately needed supplies of oxygen from countries including the U.S., Britain and France.

Three thousand people partied in a British warehouse without masks or social distancing on Friday, part of a scientific trial amid the country’s successful vaccine rollout.

Few of the 78,000 volunteers at the Tokyo Olympics will be vaccinated. Most are being offered little more than a couple of masks and some hand sanitizer.

Anger after stampede at Israeli festival

Israelis called for accountability after a deadly stampede on Friday, as questions swirled about the culpability of the government, religious leaders and the police.

Forty-five people died in a night that began as a joyful pilgrimage for tens of thousands of ultra-Orthodox Jews but became one of the deadliest peacetime tragedies in Israeli history. But the tragedy didn’t come as a surprise: For years, local politicians, journalists and ombudsmen had warned that the site had become a death trap, even as officials turned a blind eye to safety concerns.

Background: Israeli governing coalitions have long courted the growing ultra-Orthodox minority, a critical voting bloc that can turn the tide of an election. Tensions between the insular group and the Israeli mainstream have increased in recent months, as parts of ultra-Orthodox society resisted virus restrictions ordered by the state, preferring to follow the counsel of their own leadership.

Boris Johnson’s fiancée in the spotlight

Critics of Boris Johnson, the British prime minister, have turned on Carrie Symonds, his fiancée, in a raging scandal over his costly interior decorating.

Johnson has been accused of secretly using funds from a Conservative Party donor to supplement his public budget for redecorating his apartment on Downing Street, prompting an investigation by Britain’s Electoral Commission. But it is Symonds and her purportedly expensive taste in wallpaper and designer furniture that has become a running theme on social media and in British tabloids.

For Symonds, a former Conservative Party communications chief who now works for an animal-rights group, it is the latest trial in a year of dramatic events: Johnson’s near-fatal illness after he contracted the coronavirus; the birth of their son, Wilfred; and the bitter purging of Johnson’s chief adviser, Dominic Cummings, in which she is reported to have played a behind-the-scenes role.

#CarrieAntoinette: Headlines and hashtags were launched by a Tatler magazine report on Symonds that quoted an anonymous visitor deriding the Downing Street décor left by Johnson’s predecessor as a “John Lewis furniture nightmare,” referring to a British department store. Symonds’s defenders say the attacks on her are sexist.

As U.S. troops prepared to leave Afghanistan, a suicide bomber blew up a truck in Logar Province on Friday, killing at least 27 people and wounding more than 100. The Taliban has not yet claimed responsibility.

Iran and Saudi Arabia are holding secret talks that could help calm conflicts in Lebanon, Syria, Iraq and Yemen.

Amid Myanmar’s mass protests, some are acknowledging that democracy cannot flourish without including the country’s long-persecuted ethnic minorities.

The lead lawyer defending the Russian opposition leader Aleksei Navalny was arrested on Friday in Moscow.

After 500 years, a bronze hand finally got its missing finger back.

An $18 million refit of the Roman Colosseum, planned to be ready by 2023, will give tourists a gladiator’s view of the landmark.

Germany will return a “substantial” number of priceless artifacts known as the Benin Bronzes to Nigeria.

An Egyptian mummy long thought to be a male priest was recently discovered to have been a pregnant woman, the first known case of its kind, scientists in Poland said.

Four astronauts returned to earth early yesterday morning after their successful round trip to the International Space Station on a SpaceX vessel.

Apple will square off today against Epic Games, maker of Fortnite, in an antitrust trial that could rein in the tech goliath’s control over the app economy.

The social networking app Clubhouse is booming in repressive states across the Middle East, where users of the forum speak freely about otherwise taboo topics.

A romance steeped in international espionage landed Alina López Miyares, a 62-year-old teacher with dual American-Cuban citizenship, in a Cuban prison. As in the best spy stories, big questions remain: How much did she know about the web of espionage that entangled her? Where were her loyalties?

An epidemic that didn’t happen

In July 2014, a man boarded a plane in Monrovia, Liberia, and flew to Lagos, Nigeria. He felt sick with a fever when the trip began and was in worse shape by the time he landed. The Nigerian authorities took him to a hospital, where doctors eventually diagnosed Ebola.

From that first patient, infections soon began to spread in Lagos, Africa’s most densely populated city. But two months later, the crisis was over. Nigeria had no more Ebola cases, and fewer than 10 people, including the man from Liberia, had died.

How did Nigeria prevent an epidemic? It wasn’t science, or at least not science as people typically define it. It was more basic than that.

Nigeria succeeded through a combination of good governance and organizational competence. Officials conducted roughly 18,500 in-person interviews with people potentially exposed to the Ebola virus and then moved those who seemed to be at risk into isolation wards. They were released if they tested negative, and moved to a different isolation ward if they tested positive.

More recently, these same kinds of logistics have helped some countries fare better against Covid-19 than others. Canada’s rate of deaths per capita is only 37 percent of the U.S. rate, thanks partly to tighter travel restrictions. Britain and Israel are now doing better than continental Europe not because of laboratory discoveries but because of more effective vaccine distribution.

Many of the world’s biggest challenges today, like Covid and climate change, might seem to be technical problems. Further technical progress is important, but there’s a far more important part to the equation. As with Nigeria’s Ebola management, politics remains the most powerful mechanism for human progress.

The story of Nigeria’s success against Ebola appears in a new report from the public health group Resolve to Save Lives.

Olympia Dukakis, who won an Academy Award for her world-weary and worldly wise role in “Moonstruck,” died on Saturday at 89. This week, stream the 1987 film, which has recently enjoyed a resurgence.

Here’s today’s Mini Crossword, and a clue: You are here (five letters).

That’s it for today’s briefing. Thanks for joining me. — Natasha

The latest episode of “The Daily” is from a four-part series on a mental health crisis in a high school in Odessa, Texas.

David Leonhardt wrote today’s Arts and Ideas. You can reach Natasha and the team at briefing@nytimes.com.