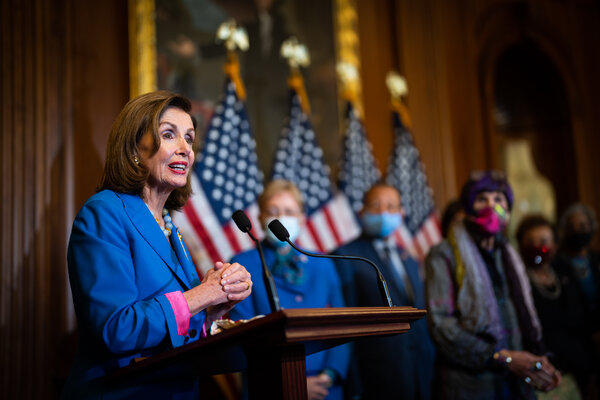 Biden’s agenda on the line

President Biden signed a short-term spending bill to fund the U.S. government until early December and avoid an imminent shutdown.

The extension gave lawmakers additional time to reach consensus over the dozen annual bills that dictate federal spending, but the future of Biden’s domestic agenda still hung in the balance.

Late Thursday night, Democrats in the House of Representatives delayed a vote on a $1 trillion bipartisan infrastructure bill, a setback to a crucial piece of Biden’s economic agenda. Liberal Democrats had threatened to block it without substantial progress toward passing a $3.5 trillion social policy and climate bill.

That larger legislation faces tough resistance from moderates in the party. On Thursday, Senator Joe Manchin of West Virginia, a key holdout, announced for the first time that he would support only $1.5 trillion in funding for the social safety net.

The debt ceiling: On Thursday night, the Senate took its first procedural step to raise the debt limit, setting up another partisan clash. Janet Yellen, the Treasury secretary, told Congress that the deadline was Oct. 18 and inaction would risk a first-ever default on the federal debt.

European countries with insufficient vaccination coverage could be in serious trouble if they relax Covid-19 restrictions in the next few weeks, according to a new report by the European Center for Disease Prevention and Control.

That level of vaccine coverage will not be enough to forestall outbreaks when pandemic restrictions are relaxed, the agency warned, especially now that the Delta variant is the bloc’s dominant strain.

Schools: Most children in the bloc have resumed attending school in person, with no coronavirus vaccine authorized yet for children under 12. For this reason, it is especially important for the education system to put preventive measures in place, the report said.

Several countries in Asia are now on track to surpass the U.S. in fully vaccinating their populations.

Only nine African countries have met a goal of vaccinating 10 percent of their populations by the end of September, the W.H.O. said.

The Baltic country has enraged Beijing by cozying up to Taiwan, quitting a Chinese-led diplomatic forum and telling its officials to scrap certain Chinese phones that it says carry censorship software.

In response, Beijing has recalled its ambassador, halted trips by a Chinese cargo train into the country and has made it nearly impossible for many Lithuanian exporters to sell their goods in China. Chinese state media accused Lithuania of being the “anti-China vanguard” in Europe.

The nations are hardly comparable: China has 1.4 billion people. Lithuania has fewer than 3 million, no tanks or fighter jets, and its economy is 270 times smaller than China’s.

But Lithuania has proved that even tiny countries can create headaches for a superpower. Its role as a transit corridor for goods heading to Europe makes it important to Beijing. And now, its fellow members in the European Union are expected to discuss the situation at a meeting next week. Nothing could be worse for Beijing than if other countries followed Lithuania’s example.

A French court sentenced Nicolas Sarkozy, the former president, to a year of house arrest for illegally financing his failed 2012 re-election campaign.

A Dutch newspaper reported that the police in the Netherlands had beefed up security around Prime Minister Mark Rutte amid fears over the country’s notorious drug gangs.

German police arrested a 96-year-old woman, who worked as a secretary in a concentration camp, after she failed to show up in court.

Africa and the Middle East

Ethiopia ordered the expulsion of seven senior U.N. officials, some of whom are leading the aid response in Tigray.

In East Africa, people who usually work in tourism are struggling to make a living without regular safaris.

Prime Minister Naftali Bennett of Israel claims he wants to “shrink” the conflict with Palestinians, though a solution may remain elusive.

Police stormed an Ecuadorean prison where more than 100 inmates died this week as gangs fought for control.

A strange comet astonished astronomers when it erupted four times in quick succession.

Daniel Craig spoke to The Times about his final James Bond appearance in “No Time to Die,” out on Oct. 8. “I’ve got other projects I do, and they’ll reward me, but there’s nothing quite like a Bond movie,” he said.

The State of Vaccine Mandates in the U.S.