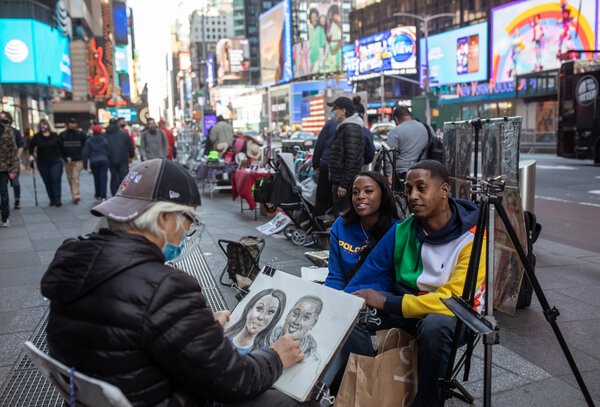 The U.S. turns a corner

Americans have entered a new, hopeful phase of the coronavirus pandemic as the outlook has improved across the nation. Numbers of cases and deaths have dipped, and more people are shrugging off masks, venturing into restaurants and returning to prepandemic routines.

Public health experts said that while they still expected significant local and regional surges, they did not think that those would be as widespread or that they would match past peaks because of a successful vaccination campaign. More than 56 percent of adults in the U.S. have received at least one shot, and more than 30 percent are fully vaccinated.

But there are reasons to remain cautious: The pace of vaccinations is slowing. In a sign of flagging demand, only 9 percent of American adults have not been vaccinated and say they would like to get a shot as soon as possible, a poll showed. Experts are now focusing on those who are less willing to get the shots.

By the numbers: The U.S. is recording about 49,000 new cases a day, the lowest number since early October, and hospitalizations have plateaued at around 40,000. Nationwide, deaths are hovering around 700 a day, down from a peak of more than 3,000 in January.

The E.U. said it would consider supporting a proposal to waive vaccine patent protections but did not endorse it.

Athletes and officials attending the Olympics will have the chance to receive shots of the Pfizer-BioNTech vaccine before they arrive in Japan in July.

As India recorded a single-day high in new coronavirus cases on Thursday, its vaccination campaign has been marred by shortages. States are competing against one another to get doses.

New studies suggest that the Pfizer and Moderna vaccines protect against severe Covid disease, including illness caused by some variants.

Scotland weighs its future in Britain

Voters in Scotland went to the polls yesterday to elect 129 members of Scotland’s Parliament, and though results are not anticipated before Friday afternoon, the pro-independence Scottish National Party is expected to make gains.

A clear majority would be brandished as a powerful mandate to demand another referendum on independence from the U.K., after an earlier one was defeated in 2014.

Scotland’s ancient alliance with England is itself in poor health. Brexit has reminded Scots that no matter how they cast their ballots, they are just 8 percent of Britain’s population and are easily outvoted by their neighbors to the south, which has left them unable to prevent the Conservatives from taking power in eight of 11 elections since 1979.

Map to success: Pointing to the economic damage done by Brexit, Scotland’s first minister, Nicola Sturgeon, says she would aim to rejoin the E.U. after breaking away from the U.K.

Post-Brexit ruckus: A dispute over fishing rights ballooned, leading Britain and France to send naval ships to the island of Jersey in the English Channel. By the day’s end, both sides had pledged to work it out.

Three months after a military coup ended Myanmar’s experiment in democracy, a sense of foreboding is back. A new junta is consolidating its grip by resorting, yet again, to a reign of terror.

Soldiers with slingshots and rifles bang on doors nightly, arresting, abducting and assaulting people. Prisons are once again filled with poets, Buddhist monks and politicians. Hundreds of people, many of them young men, have disappeared. Nightly broadcasts show mug shots of protesters, often with faces bruised from interrogations.

For all the fear percolating in Myanmar, the resistance to the coup has only hardened. It has included a national strike and a civil disobedience movement, which have paralyzed the economy. Banks and hospitals are all but shut.

Quotable: “Myanmar is going back to the bad old days, when people were so scared that their neighbors would inform on them and they could get arrested for no reason at all,” said a former police officer who is now in hiding after opposing the coup.

Scheduled for May 22 in the Netherlands, this year’s Eurovision Song Contest is likely to be the strangest ever held — a high bar, given that past winners have included Abba and Lordi, a Finnish heavy metal act whose members dress as monsters.

During a visit to Kyiv, Antony Blinken, the U.S. secretary of state, voiced support for Ukraine’s sovereignty against Russia’s aggression and urged the country’s leaders to take action against corruption.

The U.S. could return to the Iran nuclear deal in weeks, an American official said. The Trump administration withdrew from the deal in 2018.

A race is on to produce lithium, an essential ingredient in electric car batteries and renewable energy, in the U.S. But some of the approaches to mining the raw material are not so eco-friendly.

Nearly one million Americans have signed up for Obamacare coverage since February, thanks partly to new subsidies.

“The worst was the excrement.” More than 15 endangered condors, each with a wingspan of about nine and a half feet and weighing about 25 pounds, invaded a home in California, leaving a trail of destruction in their wake.

A 21-year-old bottle of Pétrus wine, which spent 14 months aboard the International Space Station, is now being sold by Christie’s at an estimated price of $1 million.

Consular appointments for U.S. citizens overseas are nearly impossible to come by as many embassies remain all but closed, leaving more than 100,000 Americans unable to get passports, like Yona Shemesh, above, a 24-year-old dual U.S.-Israeli citizen.

Travel is restarting, but many American expatriates who had babies abroad or had documents that expired during the pandemic remain grounded. “It’s a real mess,” said one immigration lawyer. “It’s a giant, multilayered onion of a problem.”

Many countries are celebrating Mother’s Day on Sunday. Especially this year, it seems as if all mothers do is talk about their perceived failures. Instead, we asked 12 mothers to tell us about their proudest parenting moments. Here are three of them, lightly edited.

“There’s a Spanish phrase: La vida es dura, pero yo lo soy más. Life is tough, but I am tougher. I found a bilingual preschool, then a Spanish immersion elementary school. I signed her up for after-school and summer camps in Spanish, ballet en Español, cooking en Español. And now at 14, her Spanish is even better than mine.” — Veronica Chambers, the editor of Narrative Projects

“Mum was always careful to repeat that liking myself wasn’t about what I’d done, it was about who I was: a good, reliable, curious person, even if a little strange. Strange is interesting, she said. And who wanted to be boring? Now I look my own two children in the eye every day and repeat it all.” — Priyanka Mattoo, a Los Angeles-based writer and filmmaker

“While I’m feigning ‘I’ve got this,’ I always think about how I’m a nervous flyer. If the airplane hits turbulence, I carefully watch the flight attendants as they take a seat. If they’re idly leafing through Us magazine as the plane shakes and dips, I relax, too.

“Similarly, my daughter trusts what she sees, so when she’s fearful I tell her: ‘Do you see me freaking out? No. Then you shouldn’t, either.’ Although one day she’ll hug me, feel my hammering heart, and the show will be over.” — Jancee Dunn, author of “How Not To Hate Your Husband After Kids”

This ginger-lime chicken has a surprising secret ingredient.

In the film “Limbo,” a Syrian refugee deposited on a remote Scottish isle seeks meaning in his isolated surroundings, with wryly funny results.

The pandemic has offered some people an opportunity to reassess their relationship with daily showering.

That’s it for today’s briefing. See you next week. — Natasha

The latest episode of “The Daily” is on the decision from Facebook’s oversight board on Donald Trump’s account.