We’re covering a turning point in the U.S. coronavirus outbreak, and the return of the reign of terror in Myanmar. 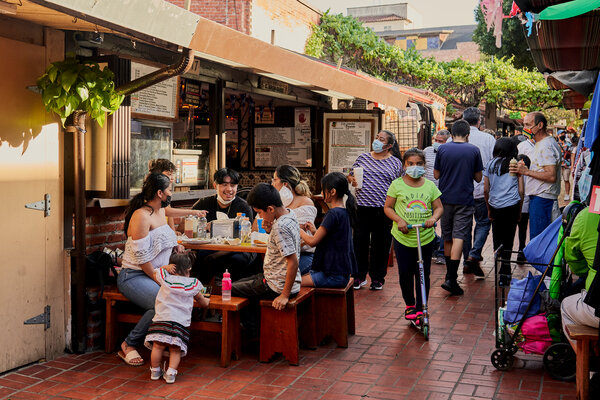 The U.S. is turning a corner

Americans have entered a new, hopeful phase of the coronavirus pandemic as the outlook has improved across the nation.

The country that faced the world’s worst outbreak is recording about 49,000 new cases a day, the lowest number since early October, and hospitalizations have plateaued at about 40,000, a similar level as in the early fall.

The biggest reason experts are optimistic that the trajectory may last is the vaccination campaign. More than 56 percent of adults have received at least one shot, and more than 30 percent are fully vaccinated.

Reasons for caution: The pace of vaccinations is slowing, and experts are now focusing on a swath of Americans who are less willing to get the shots.

Case study: New York, where hospitals were overwhelmed and hundreds of deaths were reported each day last spring, is now 40 percent vaccinated and barreling toward reopening. Even Broadway is coming back in September.

As India recorded a single-day high in new coronavirus cases on Thursday, its vaccination campaign has been marred by shortages. States are competing against one another to get doses.

New studies suggest that the Pfizer and Moderna vaccines protect against severe Covid disease caused by some variants.

The E.U. said it would consider supporting calls to waive vaccine patent protections.

Three months after a military coup ended Myanmar’s experiment in democracy, a sense of foreboding is back. A new junta is consolidating its grip by resorting, yet again, to a reign of terror.

Soldiers bang on doors nightly, arresting, abducting and assaulting with slingshots and rifles. Prisons are once again filled with poets, Buddhist monks and politicians. Hundreds more, many young men, have disappeared. Nightly broadcasts show mug shots of protesters, many with faces bruised from interrogations.

For all the fear percolating in Myanmar, the resistance to the coup has only hardened. It has included a national strike and a civil disobedience movement, which have paralyzed the economy. Banks and hospitals are all but shut.

Quotable: “Myanmar is going back to the bad old days, when people were so scared that their neighbors would inform on them and they could get arrested for no reason at all,” said a former police officer who is now in hiding after opposing the coup.

Olympic athletes will get vaccines

The International Olympic Committee announced that it had struck deals with Pfizer and BioNTech for Covid-19 vaccine doses for athletes and officials, who will get their shots before they arrive in Japan for the Games in July.

It’s the latest effort to address the concerns of a skeptical Japanese public that largely does not want the Games to take place. Only 1 percent of people in Japan are vaccinated.

Along with the new program, the I.O.C. also recently announced it would buy and distribute doses of a Chinese vaccine. There is still no requirement that athletes, coaches, officials or others attending the Games must be vaccinated before coming to Japan.

Related: The pandemic slowed worldwide testing for performance-enhancing drugs to a crawl and made it extremely difficult to fix a problem that has persisted for decades: Testing is inconsistent across many countries.

During a visit to Ukraine, U.S. Secretary of State Antony Blinken voiced support for the country’s sovereignty against Russia’s aggression and urged Ukraine to take action against corruption.

Colombians demonstrating over the past week against poverty and inequality have been met with a brutal police response, leaving at least 24 people dead and 87 missing.

The police in Hong Kong are ramping up pressure on news outlets: Authorities distributed a pamphlet denouncing “rumors and lies,” and warned the media against undermining national security.

A stabbing attack this week on two Asian women on one of the busiest streets in San Francisco and other attacks have caused some older Asian-American residents to fear going outdoors.

In a social media post about visa applications, the U.S. Embassy in Beijing posed a question that some critics called racist. It was the latest thorn in a prickly diplomatic relationship.

Scotland is once again weighing its future within the United Kingdom. Elections on Thursday could build momentum for another referendum on independence. Our reporters captured the mood of uncertainty in the country.

All the presidents’ art

The paintings and the sculptures displayed in the Oval Office represent the choices of the sitting American president — subtle and not-so-subtle signals every administration sends about its values and view of history.

President Biden’s approach to art seems different from that of his predecessors. In terms of sheer volume, he has included more sculptures and paintings than other recent presidents, partly, experts say, because he is trying to signal his support for an array of causes: labor, science, the importance of compromise and more.

Biden chose to give the most prominent space above the fireplace to a large portrait of Franklin D. Roosevelt instead of George Washington, who usually gets the prime spot. Roosevelt, like Biden, came to power at a moment of crisis in the U.S.

His office contains at least seven busts of key figures, an unusually high number. They include women, people of color and civil rights champions.

Turn store-bought gnocchi into a vibrant one-pot meal with peas and leeks.

What to Listen TO

The latest episode of “The Daily” is on the decision from Facebook’s Oversight Board.