Climate change has plunged the Western U.S. into its worst drought in two decades. And a record-breaking heat wave only made things worse.

In Arizona and Nevada, it’s been so hot that doctors warned people they could get third-degree burns from the asphalt. Wildfires raged in Montana and Utah. Power grids in Texas strained as officials asked residents to limit appliance use to avoid blackouts.

The levels in Lake Mead, which supplies water for millions of people, are at their lowest since the 1930s. In one California lake, the water was so shallow that officials spotted plane wreckage from a 1986 crash.

And that’s just in the U.S. Experts say global temperatures will keep rising as countries — and companies — fail to limit their planet-warming emissions. Smaller countries often pay the price for wealthier nations’ pollution through extreme weather. “Most of these gases have come from the United States, China, the European Union, Russia and other developed countries,” Bernard Ferguson writes. Yet islands like the Bahamas, where Ferguson is from, “are on the front lines of the climate crisis.”

The problems in the West and around the globe are more evidence that climate change is already affecting us. But there are also reasons for hope.

What are the solutions?

For The Times Magazine’s climate issue, Ezra Klein spoke with experts to compare political progress in the U.S. with the scale of the crisis. “Our politics co-evolved with a century of fossil fuels, and so a huge portion of our regulations still favor the incumbent, which is fossil fuels,” Saul Griffith, a scientist and founder of a nonprofit, said.

In Australia, Griffith said, a kilowatt-hour of energy generated by rooftop solar panels costs about a third of what it would from a U.S. power grid. “We can make everyone’s energy future cheaper, but politics has to work with technology, which has to work with finance,” he said.

Cities have been adapting in other ways: Tucson, Ariz., is a national leader in recycling wastewater for irrigation and firefighting. Districts in California are investing billions into infrastructure to store water for future droughts.

More globally, another story in the magazine, by Aurora Almendral, focuses on decreasing the shipping trade’s carbon footprint. Cargo vessels are among the largest machines on the planet, and shipping generates 2.9 percent of global carbon-dioxide emissions — nearly as much as the entirety of South America. Some experts believe using wind through modern sails could considerably reduce that number.

Other companies are developing more environmentally friendly manufacturing techniques that would repurpose carbon dioxide into building materials, fuels, plastics and even fish food.

“You might wake in the morning on a mattress made from recycled CO2,” Jon Gertner writes. “You might drive your car — with parts made from smokestack CO2 — over roads made from CO2-cured concrete. And at day’s end, you might sip carbontech vodka while making dinner with food grown in a greenhouse enriched by recycled CO2.”

For more: When wildfires blaze across the West, the focus is often on the immediate devastation. But the harm they cause to water supplies can linger for years.

In Opinion: “The way we manage our water is outdated, inefficient, uncoordinated and to a lot of people, unfair,” The Times columnist Farhad Manjoo writes. 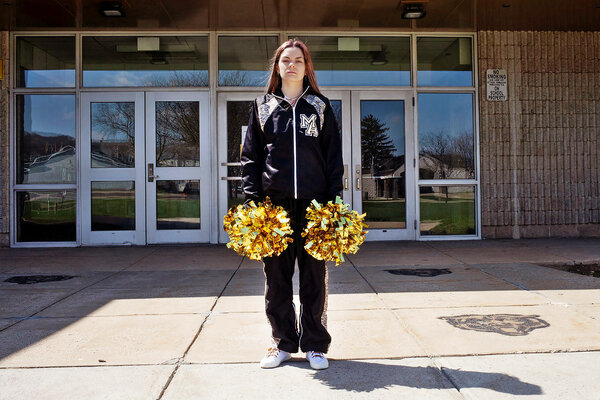 The Supreme Court ruled that a Pennsylvania high school violated a student’s First Amendment rights when it punished her for a profane Snapchat message sent while off-campus.

The court ruled against a California regulation that let union organizers recruit farmworkers at their workplaces, its latest blow to organized labor.

Police officers chasing someone over a minor crime cannot always enter homes without a warrant, the court ruled.

In response to rising gun violence, President Biden said states could use federal stimulus money to fund the police, as Democrats seek to show urgency on crime.

A woman from Indiana is the first Capitol rioter to be sentenced. She will serve no prison time.

Michigan Republicans published an unsparing debunking of voter fraud claims in the state.

The Biden administration is forcing out Rodney Scott, the U.S. Border Patrol chief, who is a supporter of Trump-era immigration policies.

The Biden administration plans to extend the national moratorium on evictions through July.

A researcher recovered early sequences of the coronavirus that could help scientists understand its origins.

The Pfizer and Moderna vaccines may cause cardiac inflammation in very rare instances, the C.D.C. said. Most of those very rare cases are mild.

Britney Spears asked a court to end the legal arrangement that controls her life. “This conservatorship is abusive,” she said.

The U.S. has a blood shortage, the American Red Cross says. (Here’s how to donate.)

John McAfee, the antivirus software pioneer, died in a Spanish prison. He was awaiting extradition to the U.S. to face tax-evasion charges.

Warren Buffett resigned as a trustee of the Bill and Melinda Gates Foundation.

The authorities in South Carolina are opening a new investigation into an unsolved 2015 death after two killings in a tiny hamlet this month.

Swim good: When the pandemic closed his pool, he trained at the actor David Duchovny’s house. Now he’s going to the Paralympics.

“The Rabbi said it was OK”: How a Hasidic mother of 10 became a doctor.

Must see: Security footage of elephants. (It’s better than it sounds.)

Lives Lived: Milkha Singh, a track star known as the Flying Sikh, overcame adversity to become a hero of post-colonial India. He died of Covid complications.

The end of the late-night sidekick?

When Conan O’Brien hosts the final episode of his late-night talk show on TBS tonight, it could end the era of comedy sidekicks.

The sidekick has been a TV staple since the 1950s, Jason Zinoman writes in The Times. The role — personified by Ed McMahon, who sat next to Johnny Carson for more than three decades — was to set up jokes, get teased and make the host look good.

When O’Brien came to late night in 1993, he brought along the improv comic Andy Richter. Unlike his predecessors, though, Richter didn’t sacrifice his voice or dignity — he added pinpoint ad-libs, stole scenes and built on jokes. And O’Brien was happy to share the spotlight.

By redefining the late-night sidekick, O’Brien and Richter may have rendered the role irrelevant. Their rapport paved the way for shows like Showtime’s “Desus & Mero,” Jason writes, “where two funny friends with great chemistry play off each other without rigidly hierarchical roles.”

For more: Dave Itzkoff chatted with Richter about what he wants to do next. — Tom Wright-Piersanti, Morning editor

This chicken salad with balsamic dressing is a perennial favorite.

A set of three sci-fi indies and a clever rom-com are among this month’s hidden streaming gems.

A generation of thinkers is grappling with what consent means, Parul Sehgal writes.

The pangram from yesterday’s Spelling Bee was atrophy. Here is today’s puzzle — or you can play online.

Here’s today’s Mini Crossword, and a clue: In the loop (five letters).

Thanks for spending part of your morning with The Times. See you tomorrow.

Today’s episode of “The Daily” is about a vaccine maker in India. On the Modern Love podcast, the complexities of queer divorce. “Sway” features Alison Bechdel.

Claire Moses, Ian Prasad Philbrick and Tom Wright-Piersanti contributed to The Morning. You can reach the team at themorning@nytimes.com.