Since the power went out in Texas, the state’s most prominent Republicans have tried to pin the blame for the crisis on, of all things, a sweeping progressive mobilization to fight poverty, inequality and climate change. “This shows how the Green New Deal would be a deadly deal,” Gov. Greg Abbott of Texas said Wednesday on Fox News. Pointing to snow-covered solar panels, Rick Perry, a former governor who was later an energy secretary for the Trump administration, declared in a tweet “that if we humans want to keep surviving frigid winters, we are going to have to keep burning natural gas — and lots of it — for decades to come.”

The claims are outlandish. The Green New Deal is, among other things, a plan to tightly regulate and upgrade the energy system so the United States gets 100 percent of its electricity from renewables in a decade. Texas, of course, still gets the majority of its energy from gas and coal; much of that industry’s poorly insulated infrastructure froze up last week when it collided with wild weather that prompted a huge surge in demand. (Despite the claims of many conservatives, renewable energy was not to blame.) It was the very sort of freakish weather system now increasingly common, thanks to the unearthing and burning of fossil fuels like coal and gas. While the link between global warming and rare cold fronts like the one that just slammed Texas remains an area of active research, Katharine Hayhoe, a climate scientist at Texas Tech University, says the increasing frequency of such events should be “a wake up call.”

But weather alone did not cause this crisis. Texans are living through the collapse of a 40-year experiment in free-market fundamentalism, one that has also stood in the way of effective climate action. Fortunately, there’s a way out — and that’s precisely what Republican politicians in the state most fear.

A fateful series of decisions were made in the late-’90s, when the now-defunct, scandal-plagued energy company Enron led a successful push to radically deregulate Texas’s electricity sector. As a result, decisions about the generation and distribution of power were stripped from regulators and, in effect, handed over to private energy companies. Unsurprisingly, these companies prioritized short-term profit over costly investments to maintain the grid and build in redundancies for extreme weather.

Today, Texans are at the mercy of regulation-allergic politicians who failed to require that energy companies plan for shocks or weatherize their infrastructure (renewables and fossil fuel alike). In a recent appearance on NBC’s “Today” show, Austin’s mayor, Steve Adler, summed it up: “We have a deregulated power system in the state and it does not work, because it does not build in the incentives in order to protect people.” 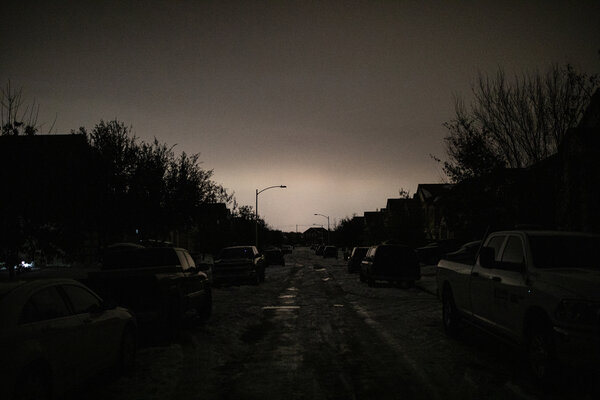 This energy-market free-for-all means that as the snow finally melts, many Texans are discovering that they owe their private electricity providers thousands of dollars — a consequence of leaving pricing to the whims of the market. The $200,000 energy bills some people received, the photos of which went viral online, were, it seems, a mistake. But some bills approaching $10,000 are the result of simple supply and demand in a radically underregulated market. “The last thing an awful lot of people need right now is a higher electric bill,” said Matt Schulz, chief industry analyst with LendingTree. “And that’s unfortunately something a lot of people will get stuck with.” This is bad news for those customers, but great news for shale gas companies like Comstock Resources Inc. On an earnings call last Wednesday, its chief financial officer said, “This week is like hitting the jackpot with some of these incredible prices.”

Put bluntly, Texas is about as far from having a Green New Deal as any place on earth. So why have Republicans seized it as their scapegoat of choice?

A Shock to the System

Blame right-wing panic. For decades, the G.O.P. has met every disaster with a credo I have described as “the shock doctrine.” When disaster strikes, people are frightened and dislocated. They focus on handling the emergencies of daily life, like boiling snow for drinking water. They have less time to engage in politics and a reduced capacity to protect their rights. They often regress, deferring to strong and decisive leaders — think of New York’s ill-fated love affairs with then-Mayor Rudy Giuliani after the 9/11 attacks and Gov. Andrew Cuomo in the early months of the Covid-19 pandemic.

Large-scale shocks — natural disasters, economic collapse, terrorist attacks — become ideal moments to smuggle in unpopular free-market policies that tend to enrich elites at everyone else’s expense. Crucially, the shock doctrine is not about solving underlying drivers of crises: It’s about exploiting those crises to ram through your wish list even if it exacerbates the crisis.

To explain this phenomenon, I often quote a guru of the free market revolution, the late economist Milton Friedman. In 1982, he wrote about what he saw as the mission of right-wing economists like him: “Only a crisis — actual or perceived — produces real change. When that crisis occurs, the actions that are taken depend on the ideas that are lying around. That, I believe, is our basic function: to develop alternatives to existing policies, to keep them alive and available until the politically impossible becomes politically inevitable.”

The G.O.P. have effectively deployed this tactic even after crises like the 2008 market collapse, created by financial deregulation and made deadlier by decades of austerity. Democrats have, largely, been willing partners. This seems counterintuitive, but it all comes back to Friedman’s credo: The change doesn’t depend on the reasons for the crisis, only on who has the ideas “lying around” — a kind of intellectual disaster preparedness. And for a long time, it was only the right, bolstered by a network of free-market think tanks linked to both major parties, that had its ideas at the ready.

When Hurricane Katrina broke through New Orleans’s long-neglected levees in 2005, there was, briefly, some hope that the catastrophe might serve as a kind of wake-up call. Witnessing the abandonment of thousands of residents on their rooftops and in the Superdome, small-government fetishists suddenly lost their religion. “When a city is sinking into the sea and rioting runs rampant, government probably should saddle-up,” Jonah Goldberg, a prominent right-wing commentator, wrote at the time. In environmental circles, there was also discussion that the disaster could spur climate action. Some dared to predict that the collapsed levees would be for the small-government, free-market legacy of Reaganism what the fall of the Berlin Wall was for Soviet Communism.

None of it happened. Instead, New Orleans became a laboratory for the shock doctrine. Public schools were shut down en masse, replaced by charter schools. Public housing was demolished, and costly townhouses sprang up, preventing thousands of the city’s poorest residents, the majority of them Black, from ever returning. The reconstruction of the city became a feeding ground for private contractors. Republicans used the cover of crisis to call for expanded oil and gas exploration and new refinery capacity, much as Mr. Perry is doing right now in Texas with his calls for doubling down on gas.

Many tried to stop them. Teachers’ unions, despite having their members scattered throughout the country, did their best to fight the privatizations. Residents of public housing and their supporters faced tear gas to try to stop the demolition of their homes. But there were no readily available, alternate ideas lying around for how New Orleans could be rebuilt to make it both greener and fairer for all of its residents.

Even if there had been, there was no political muscle to turn such ideas into reality. Though the environmental justice movement has deep roots in Louisiana’s “cancer alley,” the climate justice movement was only just emerging at the time Katrina struck. There was no Sunrise Movement, the youth-led organization that occupied Nancy Pelosi’s office after the 2018 midterms to demand “good jobs, and a livable planet.” There was no “squad,” the ad hoc alliance of congressional progressives whose most visible member, Alexandria Ocasio-Cortez, sent shock waves through Washington by joining the Sunrisers in their occupation. There had not yet been two Bernie Sanders presidential campaigns to show Americans how popular these ideas really are. And there was certainly no national movement for a Green New Deal.

The difference between then and now goes a very long way toward explaining why Mr. Abbott is railing against a policy plan that, as of now, exists primarily on paper. In a crisis, ideas matter — he knows this. He also knows that the Green New Deal, which promises to create millions of union jobs building out shock-resilient green energy infrastructure, transit and affordable housing, is extremely appealing. This is especially true now, as so many Texans suffer under the overlapping crises of unemployment, houselessness, racial injustice, crumbling public services and extreme weather.

All that Texas’s Republicans have to offer, in contrast, is continued oil and gas dependence — driving more climate disruption — alongside more privatizations and cuts to public services to pay for their state’s mess, which we can expect them to push in the weeks and months ahead.

Will it work? Unlike when the G.O.P. began deploying the shock doctrine, its free-market playbook is no longer novel. It has been tried and repeatedly tested: by the pandemic, by spiraling hunger and joblessness, by extreme weather. And it is failing all of those tests — so much so that even the most ardent cheerleaders of deregulation now point to Texas’s energy grid as a cautionary tale. A recent article in the Wall Street Journal, for instance, called the deregulation of Texas’s energy system “a fundamental flaw.”

In short, Republican ideas are no longer lying around — they are lying in ruin. Small government is simply no match for this era of big, interlocking problems. Moreover, for the first time since Margaret Thatcher, Britain’s late former prime minister, declared that “there is no alternative” to leaving our fates to the market, progressives are ready with a host of problem-solving plans. The big question is whether the Democrats who hold power in Washington will have the courage to implement them.

The horrors currently unfolding in Texas expose both the reality of the climate crisis and the extreme vulnerability of fossil fuel infrastructure in the face of that crisis. So of course the Green New Deal finds itself under fierce attack. Because for the first time in a long time, Republicans face the very thing that they claim to revere but never actually wanted: competition — in the battle of ideas.

Naomi Klein (@NaomiAKlein) is a senior correspondent at The Intercept and the Gloria Steinem Endowed Chair at Rutgers University. Her new book is “How to Change Everything: The Young Human’s Guide to Protecting the Planet and Each Other,” will be released on Tuesday.