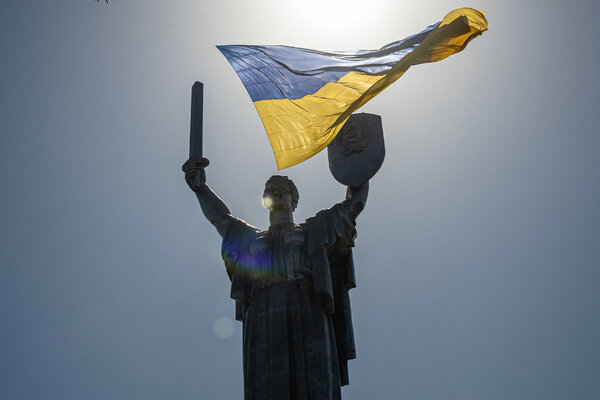 The war in Ukraine is not only a military event, it’s an intellectual event. The Ukrainians are winning not only because of the superiority of their troops. They are winning because they are fighting for a superior idea — an idea that inspires Ukrainians to fight so doggedly, an idea that inspires people across the West to stand behind Ukraine and back it to the hilt.

That idea is actually two ideas jammed together. The first is liberalism, which promotes democracy, individual dignity, a rule-based international order.

There are many people who assume that liberalism and nationalism are opposites. Liberalism, in their mind, is modern and progressive. It’s about freedom of choice, diversity and individual autonomy. Nationalism, meanwhile, is primordial, xenophobic, tribal, aggressive and exclusionary.

Modern countries, by this thinking, should try to tamp down nationalist passions and embrace the universal brotherhood of all humankind. As John Lennon famously sang, “Imagine there’s no countries/ It isn’t hard to do/ Nothing to kill or die for/ And no religion too.”

Nationalism provides people with a fervent sense of belonging. Countries don’t hold together because citizens make a cold assessment that it’s in their self-interest to do so. Countries are held together by shared loves for a particular way of life, a particular culture, a particular land. These loves have to be stirred in the heart before they can be analyzed by the brain.

Nationalism provides people with a sense of meaning. Nationalists tell stories that stretch from a glorious if broken past forward to a golden future. Individuals live and die, but the nation goes on. People feel their life has significance because they contribute these eternal stories. “Freedom is hollow outside of a meaning-providing system,” Yael Tamir writes in her book “Why Nationalism.”

Democracies need nationalism if they are to defend themselves against their foes. Democracies also need this kind of nationalism if they are to hold together. In his book “The Great Experiment,” Yascha Mounk celebrates the growing diversity enjoyed by many Western nations. But he argues they also need the centripetal force of “cultural patriotism,” to balance the centrifugal forces that this diversity ignites.

Finally, democracies need this kind of nationalism to regenerate the nation. Liberal nationalists are not stuck with a single archaic national narrative. They are perpetually going back, reinterpreting the past, modernizing the story and reinventing the community.

Over the past decades this kind of ardent nationalism has often been regarded as passé within the circles of the educated elites. I suspect there are many people in this country who are proud to wear the Ukrainian flag but wouldn’t be caught dead wearing an American flag because they fear it would mark them as reactionary, jingoistic, low class.

The first problem with this posture is that it opened up a cultural divide between the educated class and the millions of Americans for whom patriotism is a central part of their identity. Second, by associating liberalism with the cosmopolitan global elite, it made liberalism seem like a system used to preserve the privileges of that elite. The populist class backlash combined with an anti-liberal backlash, imperiling democracies across the globe. Third, it opened the door for people like Trump to seize and hijack American patriotism.

Liberal nationalism believes in what liberals believe, but it also believes that nations are moral communities and the borders that define them need to be secure. It believes that it’s sometimes OK to put Americans first — to adopt policies that give American workers an edge over workers elsewhere. It believes it’s important to celebrate diversity, but a country that doesn’t construct a shared moral culture will probably rip itself to shreds.

Yael Tamir makes the essential point: “Self-centered individualism must therefore be replaced with a more collectivist spirit that nationalism knows how to kindle.”