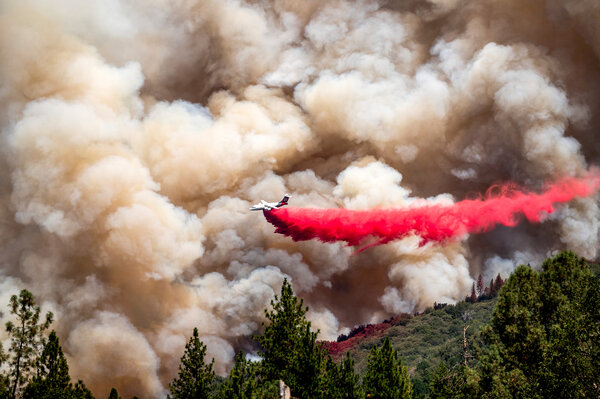 By Chad Hanson and Michael Dorsey

Dr. Hanson is a research ecologist with the John Muir Project, a subsidiary of Earth Island Institute. Dr. Dorsey is the director and chair of the Rob and Melani Walton Sustainability Solutions Service at Arizona State University.

When the Oak fire swept through more than 10,000 acres southwest of Yosemite National Park last weekend, it burned through forests where widespread logging, including commercial thinning, accelerated in recent decades. Much of the forest canopy had been removed, exposing the remaining vegetation to more direct sunlight and creating hotter, drier and windier conditions that favor the spread of flames.

But when the blaze reached the area hit by the Ferguson fire of 2018, it slowed to burning about 1,000 acres a day. The previous fire had left less available kindling such as dry leaves, pine needles, twigs and saplings on the forest floor.

The public has fretted about the threat that the Oak fire, which has burned over 19,000 acres and is less than 50 percent contained, poses to the famed Mariposa giant sequoia grove in Yosemite. One of the logging industry’s allies in Congress, Representative Scott Peters, Democrat of California, is trying to exploit the concern about giant sequoias, a species that depends on wildfires to effectively reproduce, to promote a series of sweeping commercial logging measures and environmental rollbacks under the guise of wildfire management.

The truth is that logging activities tend to increase, not decrease, extreme fires, by reducing the windbreak effect that denser forests have, for example, and by bringing in highly combustible invasive grasses that are spread by logging machinery.

Yet federal land agencies, like the U.S. Forest Service and National Park Service, are under significant political pressure to conduct commercial logging operations that benefit timber companies but tend to exacerbate overall fire severity. In December 2018, President Donald Trump issued an executive order directing the Forest Service and the Interior Department to prioritize and expand commercial logging operations on public lands, targeting mature and old trees and forests with chain saws and bulldozers.

Yosemite National Park subsequently began an unprecedented commercial logging program, with the park’s superintendent, Cicely Muldoon, agreeing in August 2021 to initiate projects on over 2,000 acres of forest in the Yosemite Valley area under the auspices of thinning, with no prior public notice, comment opportunity or environmental analysis of impacts.

That meant that as visitors arrived in Yosemite National Park this spring, they were met with a jarring sight in a crown jewel of the nation’s beloved national park system. Fully loaded logging trucks roared along the roads as commercial logging crews felled countless mature trees — some of them over five feet in diameter — and hauled them to lumber mills and power plants where they’d be burned in the Sierra Nevada foothills. That logging was then temporarily halted in early July by a lawsuit led by one of us and filed by the Earth Island Institute.

The effects were not limited to increasing the risk of more intense wildfires. Groups of giant dinosaurlike logging machines called feller-bunchers were also clear-cutting ecologically vital patches of forest, upon which many kinds of native wildlife, such as woodpeckers and bluebirds, depend for their survival.

Then, in June, a group of House Democrats and Republicans aligned with the logging industry and led by Representative Kevin McCarthy and several others introduced the deceptively named Save Our Sequoias Act. The act would curtail environmental laws, facilitate commercial logging of mature and old-growth trees and hasten postfire clear-cut logging in giant sequoia groves in Yosemite National Park, Sequoia and Kings Canyon National Park and national forests. In a letter dated June 17, over 80 environmental groups strongly opposed this destructive logging bill, for which its sponsors are trying to gather additional support in Congress.

Federal land agencies like the Forest Service and scientists funded by this agency have promoted logging for decades, dubbing it wildfire management or biomass thinning. The Forest Service is even in the commercial logging business, selling trees to private logging companies and keeping the revenue for its budget. In a case that involved Earth Island Institute, the U.S. Court of Appeals for the Ninth Circuit warned that the Forest Service has a “substantial financial interest,” in logging, one that creates bias regarding wildfire science.

In fact, a large and growing body of scientific research and evidence shows that these logging practices are making things worse. Last fall over 200 scientists and ecologists, including us, warned the Biden administration and Congress that logging activities such as commercial thinning reduce the cooling shade of the forest canopy and change a forest’s microclimate in ways that tend to increase wildfire intensity.

Logging emits three times as much carbon dioxide into the atmosphere per acre as wildfire alone. Most of the tree parts unusable for lumber — the branches, tops, bark and sawdust from milling — are burned for energy, sending large amounts of carbon into the atmosphere. In contrast, wildfire releases a surprisingly small amount of the carbon in trees, less than 2 percent. Logging in U.S. forests is now responsible for as much annual greenhouse gas emissions as burning coal.

Worryingly, the Biden administration announced in January a proposal to spend $50 billion of taxpayer money to log as much as 50 million acres of U.S. forests over the next decade, again using the wildfire management narrative as a justification. Under this plan, which congressional backers are attempting to enact in piecemeal fashion in different legislative packages — including a wildfire and drought package passed by the House on Friday and the new climate and tax deal in the Senate — most of the logging would occur on public forests, including national forests and national parks.

The president and Congress must instead increase forest protections from logging to reduce carbon emissions and allow intact forests to absorb more of the excess carbon dioxide in our atmosphere. A failure to do so will put countless species at risk, worsen global warming and increase threats of wildfire to vulnerable towns. Current logging subsidies should be redirected into programs to directly help communities become fire safe.

Such policies could have prevented the loss of over 100 homes in the Oak fire. After all, fires occur in forests, as they have done for millenniums. Assuming otherwise is like living at the coast and expecting no hurricanes. We need to help communities prepare.

Chad Hanson is the author of “Smokescreen: Debunking Wildfire Myths to Save Our Forests and Our Climate” and a research ecologist with the John Muir Project. Michael Dorsey is the director and chair of the Rob and Melani Walton Sustainability Solutions Service at Arizona State University.