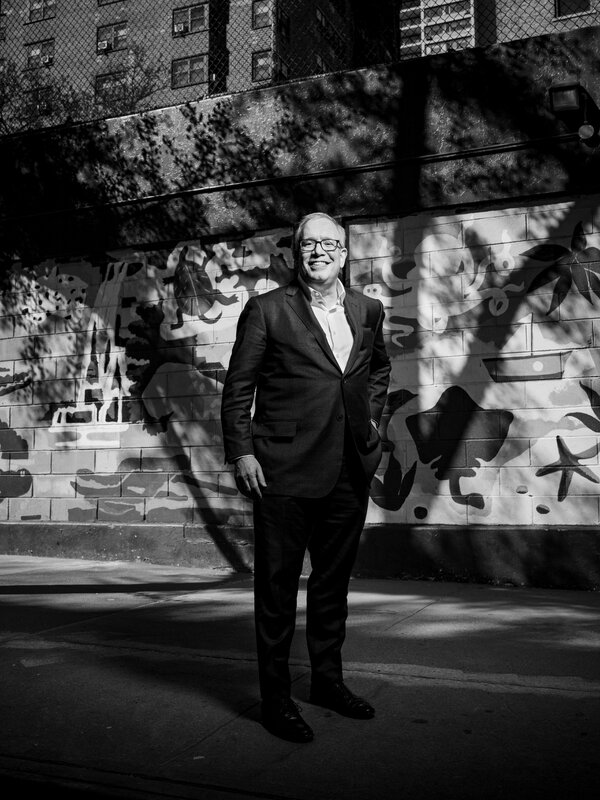 Scott Stringer is New York City’s comptroller. He previously served as an assemblyman and the borough president of Manhattan.

This interview with Mr. Stringer was conducted by the editorial board of The New York Times on April 23, several days before Jean Kim, a lobbyist who once worked for Mr. Stringer, accused him of groping her and pressuring her to have sex with him in 2001. Mr. Stringer strongly denies Ms. Kim’s allegations.

Read the board’s endorsement for the Democratic mayoral primary here.

Kathleen Kingsbury: Scott, because we only have a half-hour together, brevity is much appreciated. I wanted to start by asking you — we obviously have worked with you on a bunch of different fronts over the years — a little bit about why you want this job and why you think you are the best candidate in the field.

Look, I think this is the most consequential mayoral race in a generation. And I think we’re at the same inflection point as we were in ’77, in 2001, when the city’s future was in doubt. I do think people want a mayor, someone they believe can bring the city back, whether it’s opening up small businesses, securing private sector jobs, making sure that the tourists come back.

There is a real challenge here and I think we cannot open the city the same way we closed it. The way we can reimagine the city is through the lens of what Covid did in terms of inequity, and how it ripped apart a Band-Aid that is going to have to be put together by the next mayor.

Look, what I bring to this is my experience, my political skill set, my history of ethics and transparency. But the bottom line is this mayor’s race for me is very personal. I’m raising my kids here. I believe in the city. I’m a lifer here. And I’m going to give it everything I’ve got to make it a fair and just city, but also a city that comes back. This is truly a moment, and I’m motivated by this moment in time. And that’s why I’m running.

Kathleen Kingsbury: Great. I think Eleanor, you’re up next.

Eleanor Randolph: You know, one of the things that you’ve done as comptroller is you’ve really criticized the mayor a great deal. But how do you think your job as comptroller has prepared you to be mayor?

Part of my job is not just to criticize the mayor, but also hold agencies accountable. That’s very clear in the [City] Charter. I think the comptroller’s office gives you a unique perspective as a jumping-off point to be mayor. First of all, I’ve managed successfully a $240 billion pension fund. It’s the fourth largest in the world — I’m sorry, it’s the fourth largest in the United States, 14th largest in the world. We actually hit our actuarial targets through my years. I know it’s not something that people are going to campaign on, but I fixed the back office of that pension fund. I manage the finances. I audit city agencies. I know where the waste is. I know what de Blasio did well, but I also know what didn’t go well.

And also in terms of the pension fund, the one quick story I will tell you was I was able to get big things done because I put my political skills to work in this office. Two quick examples: The one that everybody knows, which I think is consequential, is I — unlike the mayor who said we had divested from fossil fuels because he said we divested from fossil fuels — I actually spent years making sure that we did do that $4 billion divestment. It was not easy managing trustees, especially N.Y.P.D. trustees, who didn’t necessarily see it my way from the perspective of government. But I was able to get that done, Eleanor, and we did it in a way that accomplished a very important national and international goal.

What people also have to appreciate is in order to make that pension fund efficient, I also consolidated the pension funds into one investment meeting. And as a result, we created a very efficient management office of our city’s pension fund. Mayors and comptrollers in the past tried to do it. They never managed to do it. And what I strategized was making sure that that pension fund consolidation did not go through Albany, where it was going to die, but rather did the research and figured out we could actually do it in the city. I tell you these stories because the truth is being mayor is also having the skills to look at big ideas, big goals, and get it done. And this office prepared me in a much different way than being borough president or even in the State Assembly.

Mara Gay: I’m going to jump in, thanks. So, Scott, you’ve been in politics all of your adult life. Tell us how you’ve changed over the years, if at all. I mean, some New Yorkers who have followed your entire career have been kind of surprised about your progressive campaign, since you used to be viewed as a middle-of-the-road Democrat. So did your views change? If so, why don’t you tell us about that?

I don’t think I’ve changed. I mean, I have been in politics all my life. But remember how I started? I started giving out leaflets for my cousin Bella Abzug, not exactly a middle-of-the-road Democrat in her time. I’ve been a progressive for so long they used to call me a liberal. I represented the upper left side before Brooklyn took over the mantle. Look at my history. I went to Albany as the lead progressive rebel in the Legislature. I took on Shelly Silver and ended empty-seat voting and ushered in the rules reform that no one thought was possible. I basically almost got thrown out of the Assembly. I had the most progressive voting record in the Assembly, was the only one who stood up for tenants during that time period. And while I was doing that, I was also able to pass 40 pieces of legislation, especially in the areas of domestic violence, the anti-stalking law and the like.

[Empty-seat voting was a practice that allowed Albany legislators to use what The Times referred to as a “cruise-control approach to voting,” where once legislators had signed in for the day they were counted as having voted yes on all bills unless they explicitly said otherwise. This rule changed in 2005.]

When I became borough president [Manhattan], we took on developers who were not engaging with communities, but we also did important university expansions through the lens of making sure that we work with communities. That was that moment. And then as comptroller, I continued to do the progressive, effective work that I needed to do.

I think the big intersection here was going out and recognizing that someone who had accumulated a lot of political capital like myself, over a lifetime, would then use that capital to end the I.D.C. reign in Albany. And I did step out and endorse young progressive women of color who took on the entire political establishment, wasn’t supposed to win any of these races. And we did. And so I feel that I’m being very consistent in my views, obviously. But I’ve evolved. If I hadn’t evolved over 30 years then there’s something wrong with me. By the way, the times have also changed, some of it in a very powerful way. And I’ve tried to meet those challenges. But my heart and my consistency, I feel, is very relevant.Mara Gay: So many New Yorkers are thinking not just about police reform, but also about the rise in violent crime. How do you undertake police reform that not only makes policing fairer to minorities and all New Yorkers, but also more effective? And how does defund figure into that?

I think we’re having a national reckoning. And we’re also having a local reckoning, when you think about where we’ve been in the police reform struggle, whether it relates to Sean Bell or Amadou Diallo. When I was arrested, I think nearly 20 years ago, during that fight, I was one of the first people who looked like me coming out and saying enough with stop-and-frisk, before even this mayor did in 2013.

I think we have to have a different approach to policing, and the public safety plan that I’m going to implement, that I believe in, is basically moving this department away from overpolicing in communities of color, letting police do the job that we need them to do, which is upping the clearance rates, finding the violent crime, going into the neighborhoods that we see the crime happening and making sure we make those arrests. We're at an all-time low in terms of that, 26 percent.

[N.Y.P.D. data shows that clearance rates for six categories of major crime fell from 2019 to 2020, in some cases sharply; the percentage of murders cleared, or solved by arrest or other means, dropped from 67 percent in 2019 to 50.9 percent for the same period in 2020.]

But the second part of this is we have to deal with data and reality, when 13 percent of 911 calls are calls for a crime in progress. Thirteen percent. Forty percent of the calls have nothing to do with crime. Yet what do we do? We send an over-police response to communities. It is time to take 911 out of the N.Y.P.D., center it as an agency that can respond appropriately to mental health calls, to wellness calls, to quality-of-life calls. Everyone thinks people call 311. They don’t. They actually call 911. So that’s part two of how we redirect policing. We stop putting police in the lives of our kids. We keep kids away from the criminal justice system, something I’ve worked on my entire life.