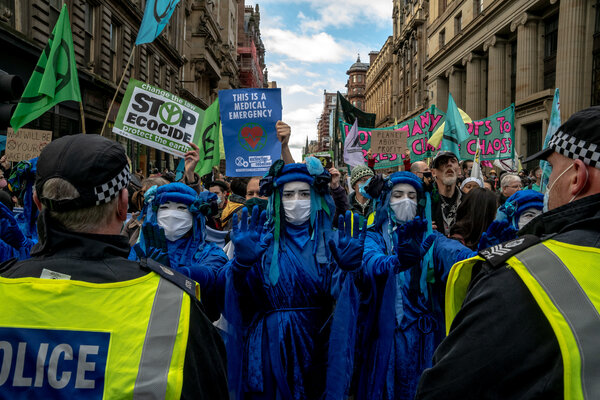 Our angry climate is screaming for an end to our combustion of coal for energy. Mining it adversely affects human health, transporting it consumes fossil fuels and burning it emits greenhouse gases, heavy metal toxins and particulate pollution. This wise decision to abandon coal by a long list of countries at the Glasgow climate summit is such good news.

But, sadly, the United States is not on that list. We are still burning this dirty fuel for a sizable portion of our electricity, and we bypass the great opportunity to come clean. This news is a huge disappointment for so many of us.

Politics is at play here. It is so hard to fathom that the solutions for a global climate emergency, with all the insidious problems that accompany it, hinges on one politician from West Virginia. No words describe my dismay!

I am a junior in high school, and I find it extremely heartbreaking to hear the effect that air pollution has directly caused on the lives of so many people. The stories of these mothers whose children are struggling with the effects were particularly powerful. While climate change may seem like an abstract concept, the personal stories and losses of many families around the world are not, and I hope these stories awaken our world to the gravity of this issue.

In regard to COP26, I feel as if nothing is changing despite the widespread effort for climate justice. I worry that countries will not change their practices, or the changes they make will not be enough. As Greta Thunberg said, COP26 is “sort of turning into a greenwash campaign, a P.R. campaign.”

What can we do if those who lead us aren’t invested in fighting for our planet? When I think about our future now, I imagine a bleak, almost apocalyptic world filled with pollution. How can we envision a good future when we live in a world where neither our environment nor our health are priorities?

If the Biden administration is serious about limiting greenhouse gas emissions, it needs to address the biggest contributor: raising animals for food — not fossil fuels, as many prefer to believe (“Biden Administration Moves to Cut Methane From Oil and Gas Rigs,” news article, Nov. 2).

According to the Worldwatch article “Livestock and Climate Change,” raising cows, pigs and chickens for food is responsible for over half of greenhouse gas emissions, a figure that has been underestimated and often ignored. Even when the problem of Big Meat surfaces in climate breakdown discourse, as it does briefly in this article, it is given little weight and its impact is downplayed.

If we are to have a chance at altering our current trajectory, we must face the truth about the meat industry’s key role in climate breakdown, and not remain focused on fossil fuels, despite their devastating contribution to overall greenhouse gas emissions.

I would hope that climate change deniers are having an increasingly hard time making their case. However, in a world of several billion people, each of us is going to have to take some responsibility for the current situation. As unpleasant as the thought is, we may have to significantly reduce disposables that clog our waste stream, we may have to limit air travel, we may even have to limit the amount of meat we eat in an effort to reduce methane.

I am sure there are other small sacrifices we can each make, but we cannot leave everything up to government.

Indeed! At the present time more than a billion people, several hundred million in Africa and India alone, live in poverty thanks to a lack of reliable energy. As an economist, I believe that the imposition of “green mandates” on developing countries is no different from economic tariffs. It must inevitably retard their development, as well as their ability to export their natural resources to the rest of the world.

What makes it unconscionable is that the richer countries cloak their intentions under a toga of morality. If the planet is to be saved, then that saving must begin at home rather than forcing developing countries into an existence that not even the poorest of the poor in rich countries would accept.