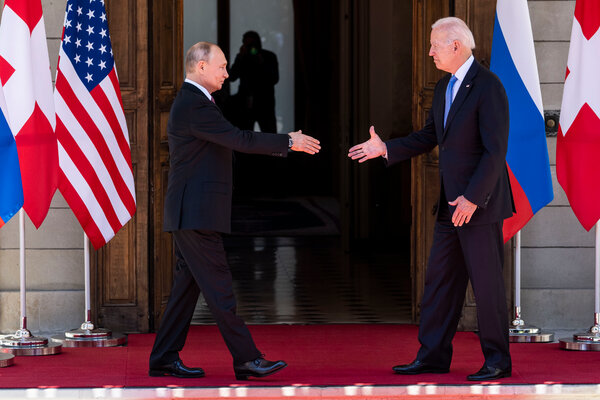 Re “Presidents Joust Even as They Seek to Ease Relations” (front page, June 17):

The summit meeting on Wednesday between Vladimir Putin and Joe Biden shows clearly that Mr. Putin is in command. The reason: He is a man of lawless action who has not been punished through equivalent action.

Mr. Putin annexed Crimea in 2014 and, shortly after, invaded eastern Ukraine, where Russian forces and sympathizers are still holding ground. In the 2016 U.S. presidential elections he was responsible for a misinformation campaign that may have helped Donald Trump win the presidency. Finally, this year, he has turned a blind eye to Russian hackers infiltrating government and business computer systems in the U.S. After all of this lawless activity, the U.S. has taken relatively weak reciprocal action through the imposition of sanctions.

Wednesday’s meeting did little to punish or deter Mr. Putin. He gave up no ground and offered no intention to redress the lawless actions. Mr. Putin is still a largely unpunished outlaw who has the U.S. entreating rather than acting seriously. Why should he stop when there is little action to stop him?

The meeting between Presidents Joe Biden and Vladimir Putin is spun in different ways, but one small point that I find very significant happened after Mr. Biden’s news conference. His last response to an inquiry from a CNN reporter about why he was confident that Mr. Putin would change his behavior was sharp and derogatory.

Before Mr. Biden’s plane left the tarmac, he said: “I owe my last questioner an apology. I shouldn’t have been such a wise guy with the last answer I gave.”

Our former president would never apologize. I appreciate Mr. Biden’s humility in that simple statement, and it sets an example for all of us. We all get frustrated, we all sometimes answer far too quickly and we all need to learn to apologize.

Re “Biden Signs Juneteenth Bill and, at a Stroke, Today Becomes a Holiday” (news article, June 18):

How can Congress enthusiastically make Juneteenth a national holiday while at the same time balking at legislation that would stop states from disenfranchising people of color?

My white college students are mostly stunned when, on Martin Luther King Jr. Day, I tell them how unpopular he was with many white Americans during his lifetime. Similarly, now that Juneteenth is a federal holiday, will people assume that when slavery ended, all Americans clasped hands, sang songs and had parades? Will they forget the desperate struggles of Reconstruction, and especially the first racial disenfranchisement campaign after Reconstruction?

And is it a coincidence that Juneteenth was voted in by the same Congress that finds itself unwilling or unable to pass legislation to halt America’s second racial disenfranchisement campaign?

Gail Bederman
Notre Dame, Ind.
The writer is an associate professor of history and gender studies at the University of Notre Dame.

Re “After a Year of Protests, Portland Grapples With Moving On” (news article, June 10):

When I moved here 34 years ago, Portland didn’t resonate with outsiders nearly as much as it does today. It gradually raised its national profile thanks to innovative city planning, an emphasis on green living, a vital art scene and gourmet food. More recently, it’s become known for constant battles between the right, the left, the police, the homeless, city leaders, business owners and local residents.

We’re tired. Portlanders are ready for long-term solutions, not short-lived social experiments, and the longer we wait, the greater our frustration grows at the lack of concrete results.

I’m not going anywhere, and I live in hope that there will be a new and improved Portland. I just want it sooner rather than later.

In 1962, the University of Chicago sociologist Peter Homans observed that the genre of the western, ubiquitous in movies and television at the time, was “originally written in the East by Easterners, for East reading.” Now, more than half a century later, the Eastern media continue to show a leering and perhaps unhealthy interest in simplistic morality tales of rough justice and vigilante violence on the Western frontier.

It has been sad and frustrating to see how national media attention has negatively affected Portland in recent years. Our local civic problems have been magnified, warped and forced into the dramatic categories of a properly entertaining western, complete with dastardly villains, heroic lawmen, Main Street shootouts, threats to traditional masculinity, bitterly contested identities, and a core tension between puritanical restraint and instinctual release.

In Professor Homans’s analysis of the western genre, the final duel between sheriff and villain cannot occur without “the boys” from the saloon present as an audience. No boys, no duel. No duel, no eruption of righteous violence.

Hmm. Perhaps we Portlanders could find more peaceful ways to resolve our problems if we didn’t have a national audience rooting for us to fail.