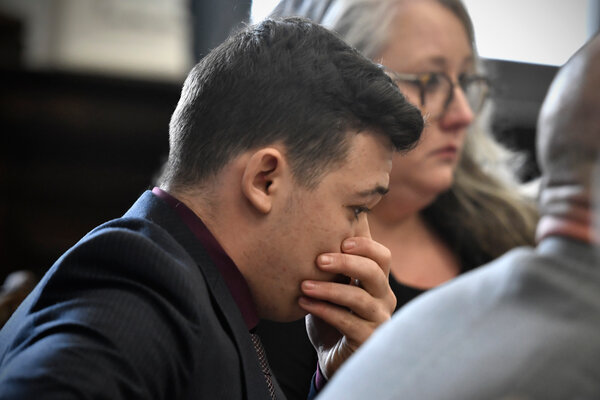 Re “Kyle Rittenhouse Is Acquitted on All Counts” (live updates, nytimes.com, Nov. 19):

If Kyle Rittenhouse hadn’t brought a gun to the protest in the first place, none of this would have happened: no deaths, no gunshots, no murders, no need for “self-defense.” But he did. He set himself up. He should suffer the consequences of his actions.

Kyle Rittenhouse deserved to be convicted. His behavior and its repercussions should be an example for everyone. Guns = Death. Fewer guns = fewer deaths.

The not guilty verdict was always the likely outcome of this trial, and the jury’s evaluation after having heard and considered all the evidence is really beyond the critique of casual observers. As to these facts, and the applicable law, the jury came to a reasonable decision.

The acquittal in this case aside, there is a broader societal lesson to be learned: Whether we look at the Trayvon Martin or the Ahmaud Arbery homicides, or the rifle-toting white supremacist militiamen who intimidate their political enemies, permissive gun legislation results in very few good guys shooting bad guys, but instead creates scenarios that put us all at risk.

As the founders wisely framed the Second Amendment, dangerous weapons are meant to be in the hands of a “well regulated militia,” not a teenager or self-appointed vigilantes.

I am terrified. Open carry, self-defense excuses for killings — where does this end? No need to discuss or even scream at each other. Just shoot.

If I saw a stranger walking outside my house with an AR-15-style rifle slung over his shoulder, I would certainly feel threatened and see it as an aggressive act.