At a small Middle Eastern restaurant in my neighborhood, I experienced the world my family had left behind.

Jordan Salama is a writer. His first book, “Every Day the River Changes,” a journey down Colombia’s Magdalena River, will be published in 2021. 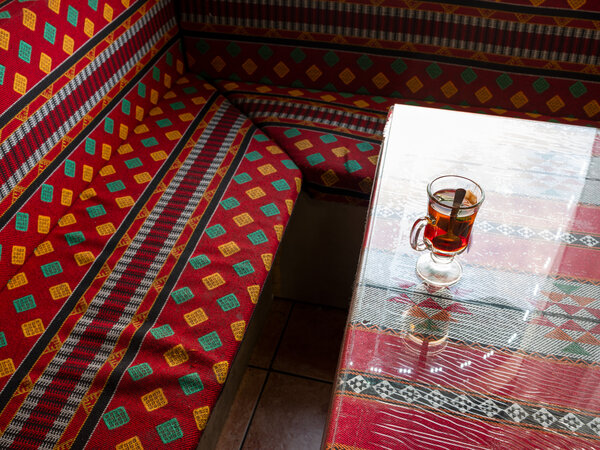 It took me far too long to start a conversation with an old Iraqi man named Monther. This is something I will regret all my life.

I was never sure where Monther lived, but I always knew where he could be found: at a small Middle Eastern place near my house that regulars call Ya Hala. First he was its owner, then its most loyal patron. He would always sit in the same corner booth laden with woven red cloth, taking his lunch or coffee or tea. I can still picture him there now, eating his favorite mix of chicken and labneh with cucumber salad, waving me over to join him.

In Ya Hala, since renamed Grill House, the voices of Fairouz and Umm Kulthum ring about the dimly lit dining room, where dramatic Arabic calligraphy adorns the decorations on the walls and the doors. I like to think it’s the kind of old-fashioned cafe easily found in Baghdad or Damascus or Beirut, but instead tucked away, inconspicuously, on a busy road just outside New York City. It feels like the sort of place where people go to remember.

Indeed, the best part about sitting at Monther’s table was hearing his stories of the past. Sometimes he was alone, but more often he was surrounded by other Arab men, each with his own tale of why he’d left home. There was the Assyrian Christian who no longer saw a life for himself in an increasingly sectarian Iraq, the old Palestinian, the young medical resident from war-torn Syria. The tastes and smells of Ya Hala drew them in, but it was Monther — a Muslim who left Baghdad midcentury — who welcomed them back.

Ya Hala is a special place for my family too. We’re Arab Jews from Syria and Iraq, part of a community that thrived for many centuries as a vibrant ethnoreligious minority across the Middle East and North Africa, only to be driven out en masse during the 20th century. There are few spaces where we feel at home; today, people find it strange that my relatives speak Arabic, that we ululate at family celebrations and hang amulets with garlic around newborns to ward off the evil eye. Ya Hala is the one place nearby where my parents and grandparents say they can truly taste the world of Damascene cafes and Iraqi souqs their family left behind. 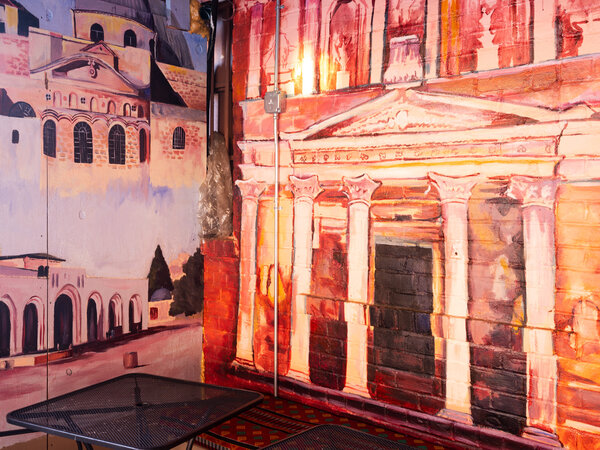 But for a long time we were worried Monther and the other Ya Hala regulars would discover that we were Jewish and treat us differently for it. It became an ironic game, to keep quiet about holidays and bar mitzvahs while we gorged on feasts of hummus bi’tahina and meat skewers. Often discriminated against in the Ashkenazi Jewish world for being Arab, and with traumatic memories of being expelled from the Arab world for being Jewish, Arab Jews have long been made to feel that our two identities are in conflict — that they must be kept carefully separate or could exist together only in private. The Arab-Israeli violence has made those personal tensions more painful and pronounced. “War is the friend of binarisms,” wrote the scholar Ella Shohat in a landmark essay on Arab Jews, “leaving little place for complex identities.”

Monther, to his great credit, did not allow me to feel this way for very long. He knew all along that we were Jewish and what it meant. “Come sit,” he beckoned to me one quiet night a few years ago, when the restaurant was empty but for the two of us. One cup of tea turned to two, and then three, as Monther told me stories of the “old Iraq” — of street vendors who wheeled carts of sharbat fruit juices through the narrow city streets, of the fresh fish grilled over charcoal fires on the banks of the Tigris River. They were the same kinds of stories I’d heard as a child, from relatives similarly nostalgic for a peaceful Iraq that no longer exists: one of pluralism and coexistence — Muslims, Jews, Christians, Kurds, Yazidis and others living side by side, no one group more Iraqi than the next.

“As a baby, I nursed from my Jewish neighbor when my own mother could not give milk,” Monther told me many times over. “Her children were my brothers and sisters too.”

I was born in this country and have never been to Iraq, which my mother fled in the 1970s when she was 6 years old, or Syria, which my great-grandparents left behind for Argentina at the turn of the 20th century. But I enjoyed Monther’s stories so much that I started to go by myself to Ya Hala, just so I could spend time with him.

In a way, a seat at Monther’s table was a place in a broader diaspora that my ancestors perhaps weren’t ready to accept, offering new hints of community where another had been lost. But it was also a great practice in empathy, something that has been slowly and tragically lost amid the ever-increasing divisiveness of American life. So afraid of our differences, we’re missing out on the beauty of finding connections that come from simply starting conversations in the first place.

Monther translated familiar Arabic children’s rhymes that my grandmother still recites here in New York, for his grandmother sang the same songs to him when he was a boy. We realized that my great-grandfather, who built some of the first cinemas in Baghdad, was responsible for many of the movies that Monther most fondly remembered from his youth. I often greeted him with “Assalamu alaikum,” and on Saturdays he’d wish me “Shabbat shalom.” “What are you eating? What will you eat?” he asked each time I sat down. And if I was alone, never, ever, would he let me pay. “How could I?” he said one afternoon. “You are like my son.”

By the turn of 2020, I was sitting at Monther’s table nearly every week. But then he started showing up less frequently, and when he did come, it was clear that he was unwell, though he tried not to show it. He was losing weight and warm color. “Just a few things. I am OK,” he said with a smile. “Thank God.”

After the Covid-19 pandemic began, we didn’t see each other for months. Then, one day in the summer when I stopped by Ya Hala for takeout, I found him back at his table, eating his kebab and labneh with salad, looking longingly out the window. I told him then that I’d begun to learn Arabic, partly in homage to our conversations, and he promised that when all this was over, we would practice together at his table, inshallah. That was the last time I saw Monther before I learned of his death in October.

The ability to share in the humanity of strangers, to gather around a crowded table (especially with elders) and exchange stories of the world — this is, of course, one of the things that the pandemic has denied us. It’s also one of the things we should strive to do better once life returns to some semblance of normal. To start the conversations we might once have feared, before it’s too late.

Jordan Salama (@jordansalama19) is a writer. His first book, “Every Day the River Changes,” a journey down Colombia’s Magdalena River, will be published in 2021.