This article is part of the Debatable newsletter. You can sign up here to receive it on Tuesdays and Thursdays.

If you’ve had to scour the market lately for an affordable car or a new apartment lease, you may have noticed: Things are getting more expensive. Since June 2020, when the pandemic-induced recession was officially declared, the Consumer Price Index — a metric that tracks the cost of a fixed basket of goods — has increased by 5.4 percent, the largest jump in 13 years, according to data released this week.

The news has fueled warnings of “a ’70s-like inflation disaster.” Should Americans be worried about their economic fortunes, or is this a speed bump on the way to a full recovery? And how will inflation concerns affect the fate of President Biden’s infrastructure and climate change plan? Here’s what people are saying.

Why everyone is talking about inflation

For most Americans, the main risk of too much inflation is that as the price of goods and services rise, wages won’t keep up, effectively shrinking their paychecks. But if workers bargain for higher pay to cover their cost of living, the theory goes, employers will pass higher labor expenses along to consumers, causing the economy to enter a ruinous inflationary spiral.

How to identify when inflation is getting out of hand is a subject of much debate in economics. “Since the 1970s, and especially since a seminal 1975 paper by Robert Gordon, many economists have tried to distinguish between transitory fluctuations in the inflation rate driven by temporary factors and an underlying ‘core’ inflation rate that is much more stable — but also hard to bring down if it gets uncomfortably high,” the Times columnist Paul Krugman writes. “The idea is that policy should largely ignore transitory inflation, which is easy come, easy go, and worry only if core inflation looks as if it’s getting too high (or too low).”

The big picture: Since the Great Recession, inflation has actually been lower than the Federal Reserve wants, a sign of stagnant wages and less-than-full employment. But the debate has flipped today, and functions as a kind of proxy war over the wisdom of the pandemic relief packages Congress has passed since last year. Some economists argue that the $1.9 trillion American Rescue Plan from March put too much money into workers’ wallets just as affluent households were getting ready to spend the large savings they accrued over the pandemic. And when the economy can’t produce enough goods to satisfy demand, prices go up.

A closer look at the numbers

The biggest single driver of the inflation reported in June, accounting for more than a third of the bump, is the used car market. “The rise and rise of car prices has been one of the dominant inflation narratives of 2021,” Felix Salmon explains at Axios. “The cause has been a shortage of new cars, which in turn has been caused by a shortage of the computer chips needed to make any modern car run.”

Used cars aren’t the only part of the story, though. Prices for gas, airfare, hotel rooms and washing machines are also surging as consumers spend down their savings and travel picks back up. Rents, too, are spiking.

The case for concern

Perhaps the loudest voice warning of the inflationary risks of Biden’s economic agenda has been Larry Summers, who served as the top economic adviser to President Barack Obama during the Great Recession. In February, a month before Congress passed the American Rescue Plan, Summers wrote in The Washington Post that there was a risk that this level of stimulus would “set off inflationary pressures of a kind we have not seen in a generation.”

“The key risk that higher inflation will continue to be accompanied by high unemployment is that the Delta variant might spread rapidly both at home and abroad,” he writes in The Hill. “Should the Delta variant take hold abroad, it could prevent the repair to the current global supply chain disruptions. In particular, it could keep both food and industrial materials in short supply, and it could exacerbate the current shortage in electronic chip production that is so vital to modern manufacturing production.”

One of the broadest and most acute threats for many Americans is the rise in rents. Small and midsize cities, in particular, have seen an influx of well-to-do renters from coastal areas, but housing construction hasn’t kept pace, leading in some cases to bidding wars.

“Landlords in many of these inland cities are realizing the power they suddenly have,” Heather Long reports for The Washington Post. “As prices rise in smaller cities, especially in the Inland West and Sun Belt, economists and Realtors warn there will be unforeseen consequences, and it could take years before enough housing is built in these areas to alleviate price pressures.”

The case for keeping calm and carrying on

Policymakers like Jerome Powell, the Federal Reserve chair, and investors are still fairly sanguine about the long-term inflation outlook, The Times’s Jeanna Smialek and Jim Tankersley report. Why? There are a few reasons.

Percentage change can be misleading: The recession last year caused prices to plummet for about three months, so at least part of the increase can be attributed to the economy’s return to a prepandemic baseline. “Gains should soon moderate for a simple reason,” Smialek and Tankersley say. “The price index has looked artificially high this year when measured against very weak readings from last year.”

Inflation picked up steam in June.

Index from a year prior

Some of June’s rise can be explained through

what’s known as base effects — prices were low

last spring, so the increase from the year prior is

larger. But base effects are now fading and are

not the full story behind the pickup in inflation. 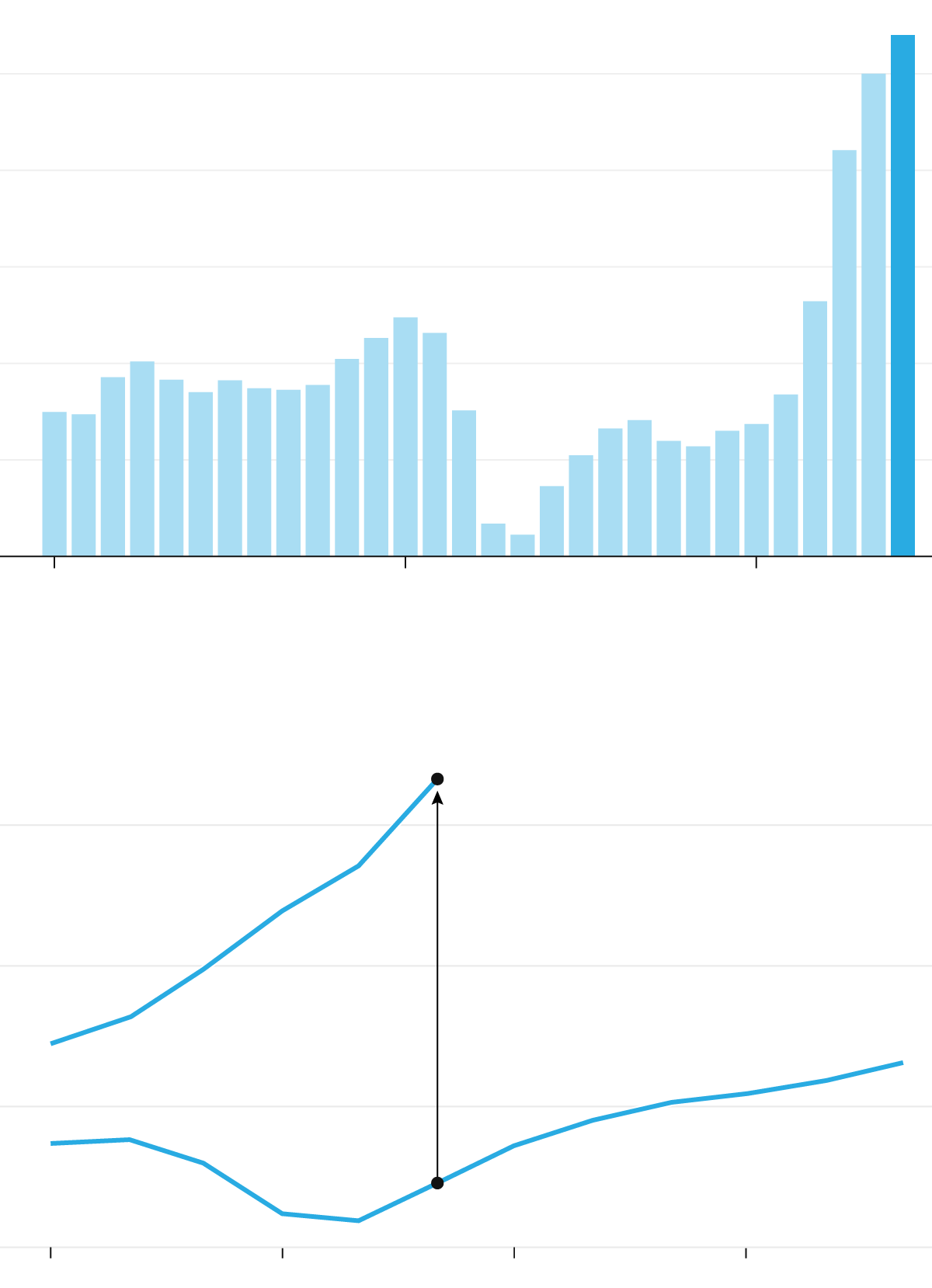 Index from a year prior

Some of June’s rise can be explained through what’s known as base effects — prices were low last spring, so the increase from the year prior is larger. But base effects are now fading and are not the full story behind the pickup in inflation.

The increases are concentrated and very possibly temporary: As Eric Levitz notes in New York magazine, the data tell a very different story if you omit the goods undergoing the most volatile swings in prices — a measure that “can provide a better signal of the underlying inflation trend,” according to the Federal Reserve Bank of Cleveland. “By this metric,” Levitz writes, “the underlying inflation trend in the U.S. is actually negative.” Even outliers like used cars are expected to come back down in price eventually — much as lumber did recently — as kinks in the supply chain are worked out.

The unemployment rate is still much higher than it was before the pandemic: There are about 6.8 million fewer jobs than there were in February 2020, suggesting the economy has a long way to go before it reaches its full potential. “Many economists argue that the current increases should level off as car supply picks up, consumer spending returns to more normal patterns, and companies rehire and expand capacity,” Smialek and Tankersley write.

How will this affect the infrastructure debate?

Republicans have pointed to inflation as evidence of the Biden administration’s economic mismanagement, and of the need to oppose congressional Democrats’ new proposal to invest $3.5 trillion in infrastructure and climate change mitigation.

Yet even inflation hawks like Summers quibble with this logic, since infrastructure investment could produce the very economic productivity gains that would curb inflation on the supply side. Conversely, Levitz writes, “raising interest rates won’t mint more microchips, but it would slow job growth at a time when America’s unemployment rate sits near 6 percent.” It’s a point Powell seemed to sympathize with when Representative Alexandria Ocasio-Cortez raised it in a House Committee on Financial Services hearing Wednesday.

For that reason, “Congress should be especially focused on supply-side effects as it debates its next major spending bill,” Karl Smith argues in Bloomberg. “It’s clear that neither the supply of workers nor the goods they produce is increasing fast enough to calm inflation fears.”

In The Times, Mike Konczal and J.W. Mason sketch out a few ideas for how Congress can help manage the inflationary pressure more federal spending might create. Removing obstacles to new housing construction, for example, could prevent rents from spiraling out of control, while increasing child care support and other family-friendly policies could increase the labor supply by making parenting and working a formal job more compatible.

“Inflation can be a genuine problem — if not now, then perhaps soon,” they write. “But it’s a challenge that can be managed, not a terrifying monster to be avoided at all costs.”

Do you have a point of view we missed? Email us at debatable@nytimes.com. Please note your name, age and location in your response, which may be included in the next newsletter.

“Inflation? Not in Japan. And That Could Hold a Warning for the U.S.” [The New York Times]

“What if Inflation Isn’t ‘Transitory’?” [The New York Times]

Here’s what readers had to say about the last debate: The panic over critical race theory

Thomas Willard, emeritus professor of English at the University of Arizona: “The need for a national curriculum in the U.S. has never been clearer. The country can never reach the ideals set out in the Constitution — ideals that conservative voices want to have instead of any critical examination of where and to what extent those ideals have been upheld — as long as students and teachers are restricted to what elected politicians want them to learn (or not to hear mentioned). Most other countries in the G20 have national curricula. They also tend to perform better in school-leaving examinations and in combating income inequality.”

Caleb from Texas: “While I thoroughly enjoyed reading about the existing state of the public debate over the appropriate role of race theory in society, I believe that your article left out a notable segment of critical race theory — the school of Afro-pessimism. … It is a theory that resists typical means of compromise, such as allegiances with other forms of inequality resistance, and rejects half measures such as ‘diversity training’ or ‘checking one’s privilege.’ Because of the pessimism that drives the ideas behind the theory, where it loses much of its audience is in its negativity about remedying the structures that give rise to anti-black violence.”

Felicia Nimue Ackerman, professor of philosophy at Brown University:
“Measures restricting your enemy’s speech
May be a temptation, it’s true.
But better beware of their burgeoning reach,
For soon they’ll be canceling you.”