For most American adults, the Covid-19 situation is now straightforward. Vaccine shots are widely available, and once you’ve had one, Covid no longer needs to dominate your life. You are unlikely to contract any form of the virus and are virtually guaranteed not to suffer serious symptoms.

You can socialize with friends, indoors or outdoors. You don’t need to wear a mask to protect yourself or others. For you, Covid has come to resemble a mild flu that you are unlikely to get.

For children under 12, however, the situation is more complicated. They are not yet eligible to receive a vaccine. And with the spread of the Delta variant of the virus, many parents are understandably anxious. Over the past week, I’ve received emails and social media messages from some of those parents, asking for help in thinking about Delta. I will try to provide it today.

How bad is Delta?

As each new coronavirus variant has emerged, people have feared that it would be a game-changer — resistant to the vaccines or vastly more serious. So far, though, all the variants have been much more similar to the original version of the virus than they have been different.

The vaccines are effective on all of them, and many of the early fears about severity of variant symptoms have not been borne out. That’s why some public-health experts use the term “scariants.”

Delta does appear to be worse than most, as I described in Monday’s newsletter. It may be the worst variant yet, in terms of contagiousness and severity. Yet it also seems to be in the same broad range as the earlier ones.

Consider this data from England, where Delta is already widespread. Covid-related hospitalizations of children have risen from their lows of a few weeks ago, but the increases are not large: 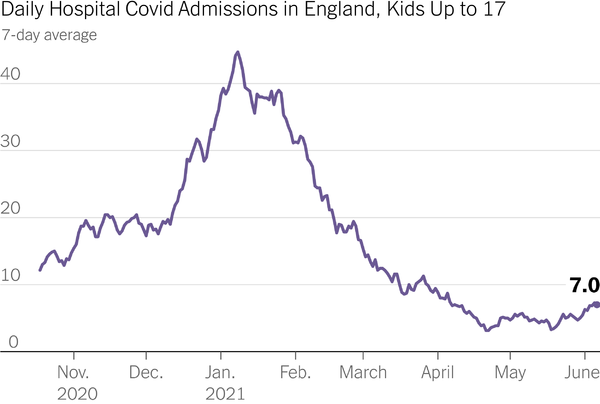 The best assumption seems to be that Delta will be modestly worse for children than earlier versions of the virus. “I haven’t seen data to make me particularly worried about Delta in kids,” Jennifer Nuzzo, a Johns Hopkins epidemiologist, told me.

This evidence suggests that serious versions of Covid will continue to be extremely rare in children.

As you can see here, some common activities — and several other diseases — have caused significantly more childhood deaths than Covid has:

The same is true for infants:

Death is not the only outcome that parents fear, of course. Yet “long Covid” and hospitalization have also been very rare in children. It’s just that society has been so focused on Covid that we have paid intense attention to the risks associated with it — even when they are smaller than other risks that we unthinkingly accept.

To take one example, we don’t use the phrase “long flu,” but it’s a real problem, including for children: One academic study has found that up to 10 percent of people who contract influenza later develop cardiac inflammation.

Serious forms of Covid are so rare in children that a few countries with better recent Covid track records than the U.S. — like Britain, Germany and Israel — may not even officially urge vaccinations for most children. The decision will be up to individual parents.

It’s true that children will face a higher risk of contracting Covid once they resume activities than they would on lockdown. The good news is that rates of Covid transmission in the U.S. have plummeted, which makes every activity safer than it would have been this past fall or winter.

Different parents will make different decisions, and that’s only natural. Here are a few guiding principles:

The interruption of school and other normal activities has caused substantial damage to children — academically, socially and psychologically. Helping children resume normal activities is important to their health. “Kids should be in camp,” Dr. Jennifer Lighter, a pediatric infectious-disease specialist at N.Y.U., told me.

There are still enough Covid uncertainties that some precautions can make sense for children, like wearing masks indoors or avoiding crowded places. “The actual overall threat of death is minuscule, and the threat to health is quite low,” Dr. Robert Wachter of the University of California, San Francisco, said, “but if I had young kids, I’d still really prefer they not get Covid.”

The riskiest areas are those with the lowest vaccination rates, which tend to be in the Southeast and the Mountain West. “If I were living in a place where cases were rising, I’d be more worried that my children could contract Covid,” Nuzzo said.

Polls suggest that many Democratic voters have an inflated sense of Covid’s risks to children. If you’re liberal, you may want to ask yourself if you fall into this category. (If you’re conservative, you may want to encourage more of your friends to get vaccinated.)

The biggest risk to your child’s health today almost certainly is not Covid. It’s more likely to be an activity that you have long decided is acceptable — like swimming, riding a bicycle or traveling in a car.

A programming note: Next week, I’ll be working on other Times projects. This newsletter will still arrive in your inbox every morning, written by my Morning colleagues, and I’ll be back Monday, June 28.

“The era of existential fights over Obamacare has ended,” The Times’s Margot Sanger-Katz and Sarah Kliff predict.

The court also ruled unanimously that a Roman Catholic social-service agency could refuse to work with same-sex couples while screening potential foster parents.

The House repealed the 2002 authorization for George W. Bush to invade Iraq, an effort to rein in presidential war powers.

Many Iranians plan to boycott today’s presidential election after top officials disqualified most viable candidates except one.

A U.S. government program will fund the development of pills to treat Covid early in the course of infection.

Courtrooms in England have become a battleground in disputes between tycoons and politicians of the post-Soviet world.

Naomi Osaka and Rafael Nadal both said they would skip Wimbledon.

“I taught online school this year. It was a disgrace,” Lelac Almagor, a veteran classroom teacher, writes in The Times.

Back to the ’90s: The espresso martini is everywhere again.

Modern Love: The promises of a father’s favorite children’s books.

Anguish into art: Dive into an Elizabeth Bishop poem with The Times’s Dwight Garner and Parul Sehgal.

Profiles in science: At 17, Juliane Diller was the sole survivor of a plane crash in the Amazon. Fifty years later, she still runs a research station founded by her parents in Peru.

A Times classic: Tips for building a skin care routine.

Lives Lived: Janet Malcolm of The New Yorker produced deeply reported, exquisitely crafted articles and books about literature, biography, photography, true crime and, most provocatively, journalism itself. She died at 86.

After years of waning popularity, Victoria’s Secret, the lingerie giant known for its hypersexy image, is undergoing a major rebrand.

One of the biggest changes: no more Angels, the scantily clad supermodels like Heidi Klum and Tyra Banks who posed exclusively for the company. In their place is “the VS Collective,” seven women who will advise and promote the brand, including the soccer star Megan Rapinoe and the actor Priyanka Chopra Jonas.

Victoria’s Secret has long “epitomized a certain widely accepted stereotype of femininity,” Sapna Maheshwari and Vanessa Friedman wrote in The Times. But that model is outdated now. Over the past decade, there has been a rise of “the anti-Victoria’s Secrets,” as Rory Satran wrote in The Wall Street Journal. Competitors like ThirdLove and Cuup prioritize “comfort as well as sexiness and structure, inclusive sizing and non-objectifying advertising imagery featuring a diverse group of models.”

Victoria’s Secret has been slow to adapt. “We needed to stop being about what men want and to be about what women want,” Martin Waters, the chief executive of the brand, said. In stores, mannequins will now come in a wide range of shapes and sizes. The company will also start offering products like nursing bras and sportswear.

One question remains: Will women buy it? — Sanam Yar, a Morning writer

Jean Smart shines in “Hacks,” an HBO comedy about a legendary Las Vegas comedian forced to work with an entitled young writer.

This week’s News Quiz is here. See how you do compared with other Times readers.

The pangram from yesterday’s Spelling Bee was exciting. Here is today’s puzzle — or you can play online.

Here’s today’s Mini Crossword, and a clue: Food that can be ordered de asada or al pastor (four letters).

Thanks for spending part of your morning with The Times. My colleagues will be writing The Morning next week, and I’ll be back on June 28. — David

P.S. Denise Grady, who has reported on science and medicine for The Times for more than 22 years, is retiring.

There’s no new episode of “The Daily.” Instead, on Episode 4 of “Day X,” an interview with the first soldier to be tried for terrorism in Germany since World War II. On “The Ezra Klein Show,” Betsey Stevenson, an Obama administration economist, discusses inflation.

Lalena Fisher, Claire Moses, Ian Prasad Philbrick, Tom Wright-Piersanti and Sanam Yar contributed to The Morning. You can reach the team at themorning@nytimes.com.