Business lobbyists and conservative think tanks are not big fans of President Biden’s proposed tax increases on the wealthy.

The Tax Foundation has said that Biden wants to raise the capital gains tax to “highs not seen since the 1920s.” Suzanne Clark of the U.S. Chamber of Commerce called the same plan “outrageous.” Jay Timmons of the National Association of Manufacturers called the proposed increase in the corporate tax rate “archaic.” And Brendan Bechtel, the chief executive of the construction company that bears his family name, said that “it doesn’t feel fair.”

All of this rhetoric has obscured a basic fact about Biden’s tax plan: It would not actually raise tax rates on the rich to high levels, historically speaking.

If all of Biden’s proposed tax increases passed — on the corporate tax, as well as on investment taxes and income taxes for top earners — the total federal tax rate on the wealthy would remain significantly lower than it was in the 1940s, ’50s and ’60s. It would also remain somewhat lower than during the mid-1990s, based on an analysis that Gabriel Zucman of the University of California, Berkeley, did for The Morning. 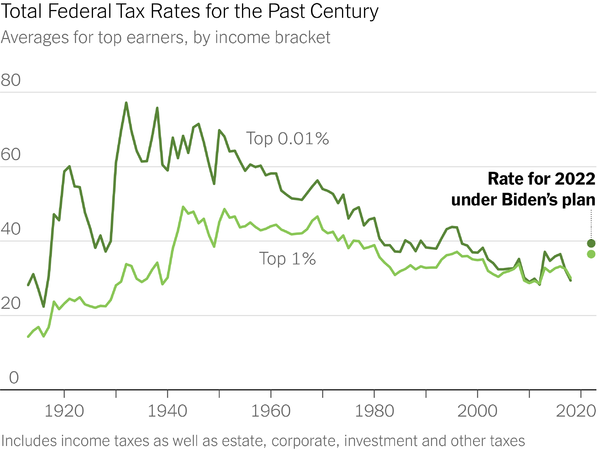 The data is a reminder of just how far taxes on the wealthy have fallen over the past 70 years. In the decades just after World War II, many corporations paid about half of their profits in federal taxes. (Shareholders, who are disproportionately affluent, effectively pay those taxes). Today, corporate taxes are only about one-fourth as large, as a share of G.D.P., as they were in the 1950s and ’60s.

The declines are not all ancient history, either. For most of the past quarter-century, taxes on the affluent have continued falling, including the rates on corporate profits, personal income, stock dividends, stock holdings and inheritances. Barack Obama reversed some of the declines, but only some. “The net effect over the past 25 years of federal income tax policy has been to reduce the overall revenue collected from top earners,” Owen Zidar, a Princeton University economist, told me.

Whether you like Biden’s plan or dislike it, it is not radical. For that reason, it is highly unlikely to have the harmful effects on economic growth that its critics are claiming. Remember: In the 1990s, the last time tax rates were as high as the ones Biden has proposed, the economy boomed. It also grew rapidly after World War II, when tax rates were higher yet.

History suggests that tax rates on the wealthy are not the main determinant of economic growth (and, if anything, higher taxes on the rich can sometimes lift growth). The main effect of Biden’s tax plan probably won’t be on the level of G.D.P. It will instead be on the relative tax burden that wealthy people pay. When they criticize the plan as unfair, archaic and outrageous, they are really saying that they enjoy paying low tax rates.

Biden, promoting the plan at a community college in Virginia yesterday, said that millionaires should pay “their fair share” to finance education programs that would help Americans get “good-paying jobs.”

The F.D.A. plans to authorize Pfizer’s Covid vaccine for adolescents 12 to 15 by early next week.

Gov. Ron DeSantis of Florida suspended all restrictions put in place by counties and cities.

New Jersey, New York and Connecticut will allow restaurants, theaters and other businesses to fully reopen on May 19.

At least 10 people died after a hospital in India ran out of oxygen.

In Colombia, tens of thousands of people protested against pandemic-induced poverty and inequality. At least 19 people died in clashes.

Virus resources: Getting your second shot? Here are the side effects to expect.

Biden said that the U.S. would admit up to 62,500 refugees in the next six months, reversing his decision to keep a lower limit set by Donald Trump.

The E.P.A. plans to limit a class of climate-warming chemicals used in air-conditioning and refrigeration.

Richard Cordray, an ally of Senator Elizabeth Warren, will oversee federal student aid, putting him at the center of Democratic disagreements over forgiving debt.

Bill and Melinda Gates are divorcing, raising questions about the future of their philanthropic foundation.

Verizon will sell Yahoo and AOL to the private equity firm Apollo for $5 billion, about half the amount it paid to buy the companies.

Pandemic disruptions have led to shortages of — and price increases for — lumber, cleaning products, microchips and other commodities.

The Los Angeles Times announced its next top editor: Kevin Merida, previously of ESPN and The Washington Post.

At least 23 people, including children, died in Mexico City after a subway overpass collapsed.

Daniel Libeskind, an architect known for the Jewish Museum in Berlin and the new World Trade Center site, will lead the renovation of the Tree of Life synagogue in Pittsburgh, site of a 2018 mass shooting.

Severe weather is threatening the South, with tornadoes in four states.

Jordi Cuixart is serving nine years in a Spanish prison. His crime: supporting a referendum for Catalan independence.

When the World Trade Organization meets this week, should it waive Covid vaccine patents to increase access for poorer countries?

Yes: Biden should support a waiver to save lives, Walden Bello writes in The Times. Doing so would also guard against the emergence of deadlier variants, Michelle Goldberg notes.

No: Vaccines are hard to make, so waivers alone won’t lift supply, the Center for Global Development’s Rachel Silverman and others argue. And companies have shown they will work voluntarily to increase doses, Andrei Iancu writes in Stat.

A Times classic: Can you guess whether these neighborhoods voted for Biden or for Trump?

Lives Lived: He was born Joseph Jacques Ahearn, but his mother thought Jacques d’Amboise would be better suited to the ballet world. After he became a dancer, d’Amboise found stardom in New York and Hollywood. He died at 86.

The incredible making of ‘All the Girls’

By the time last year that producers were ready to record a new album by the soprano Rebecca Luker, she was too sick to sing. A.L.S. had robbed her of her strength.

But the producers did not give up.

They created what Tommy Krasker, the head of Luker’s label, called “the first studio album made without ever stepping in the studio.” They used recordings of one of Luker’s final performances — and the rehearsals for it — while musicians recorded material at home during lockdown. The producers mixed the sounds, “and by some miracle what emerged sounded pristine,” the critic Jesse Green writes in The Times.

The album, “All the Girls,” also featuring the soprano Sally Wilfert, came out two days after Luker’s death in December. Green calls it beautiful and funny. (It includes this song, which is worth watching.)

Tonight, Luker’s colleagues and friends will tell stories and sing songs from her career at a fund-raising concert you can stream. — Claire Moses, Morning writer

Michael Lewis’s new book, “The Premonition,” is about medical renegades who long warned of a pandemic.

Conan O’Brien says he is “winding down” his show on TBS.

The pangrams from yesterday’s Spelling Bee were captivate and captive. Here is today’s puzzle — or you can play online.

Thanks for spending part of your morning with The Times. See you tomorrow. — David

P.S. John Schwartz, a climate writer, will leave The Times to teach journalism at the University of Texas at Austin.

Today’s episode of “The Daily” is about a population slowdown in the U.S. On “The Ezra Klein Show,” Anna Sale discusses the value of difficult conversations.

Lalena Fisher, Claire Moses, Ian Prasad Philbrick, Tom Wright-Piersanti and Sanam Yar contributed to The Morning. You can reach the team at themorning@nytimes.com.