After Benjamin Joseph was robbed at gunpoint outside his New Orleans home one night almost nine years ago, he described his attacker to the police: a Black man with a slim build who was wearing a pullover hoodie, Joseph said.

Eighteen hours later, the police made a curious decision. They arrested a teenager named Yutico Briley — even though he was heavyset and wearing a zip-up hoodie — while he was walking in Joseph’s neighborhood. Briley was Black and carrying a gun, which was evidently enough for officers to consider him a suspect.

From there, the case followed a course that’s more common than it should be. The police and prosecutors moved aggressively, seeming to care more about securing a conviction than making sure they were convicting the right person.

Instead of putting together a lineup that included Briley and several other men, the police brought him — and him alone — to Joseph and asked if Briley was the robber. “It seemed really unprofessional,” Joseph would say later. It is also a common way to produce false identification, research has found. Sure enough, Joseph identified Briley as the robber.

Later, investigators failed to collect evidence that could have cleared Briley, like security-camera footage and cellphone records that would have confirmed where he was when the robbery occurred. His original lawyers failed to do so, too. By the time other lawyers tried to do it, the records had been erased.

Ultimately, a jury convicted Briley based largely on Joseph’s identification, and a judge sentenced him to 60 years in prison without the possibility of parole. He had no prior violent convictions on his record. It was a virtual life sentence for a 19-year-old convicted of a single crime on extremely thin evidence.

There are almost certainly tens of thousands of Americans who are now imprisoned for crimes they did not commit. (Several studies have suggested a nationwide wrongful conviction rate of at least 3 percent.) A disproportionate share of the wrongly convicted are Black men.

By now, you’ve probably read at least a few stories about these injustices. They can be both depressing and enraging. But I encourage you to make some time today or this week to read the story of Yutico Briley. It appears in The Times Magazine, written by my colleague Emily Bazelon. It is in many ways “crushingly ordinary,” as Emily says. But it is also different. 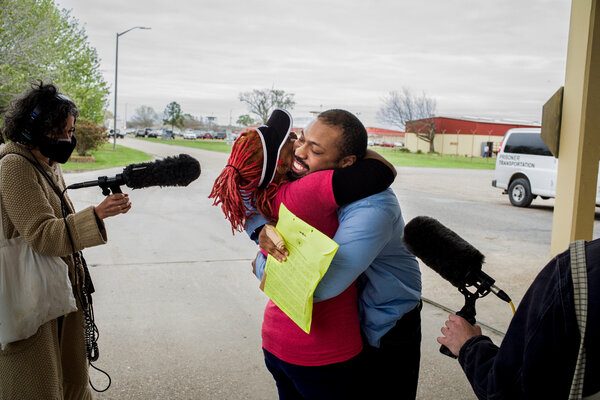 It’s an unusually personal story for Emily, about what happened after Briley contacted her from prison and she then decided to research his case. It is also a story of what can happen when prosecutors and judges are willing to revisit old cases with open minds.

“There are so many other Yuticos sitting in jail,” Jason Williams, the New Orleans district attorney, who took office this year, told Emily.

In Wisconsin, President Biden appealed to both Republicans and Democrats to get behind the bipartisan infrastructure plan. “This is a generational investment,” he said.

The Supreme Court ruled that the federal government could give private companies the power to take land from states, clearing the way for a natural gas pipeline in New Jersey.

The House voted to remove statues of Confederate leaders from the Capitol.

Confusion in the New York mayor’s race: The Board of Elections mistakenly counted 135,000 test ballots in the ranked-choice tally.

Initial results showed a narrowing lead for Eric Adams. But hours after releasing those, the board tweeted that there had been a “discrepancy” and took down the tabulations.

Dysfunction and nepotism have long plagued the Board of Elections, The Times reported last year.

Sydney and other Australian cities have enacted strict lockdowns in response to outbreaks tied to the Delta variant.

Los Angeles County has urged vaccinated people to wear masks indoors. The C.D.C. says the vaccinated are protected from serious illness and don’t need masks in most situations.

The Supreme Court, in a 5-to-4 vote, kept a federal moratorium on evictions in place.

The U.S.-Canada border is still closed. Here’s why.

North Korea’s leader, Kim Jong-un, said the country’s virus response created a “great crisis,” according to state media. It’s unclear if he was talking about an outbreak.

Months before a Florida high-rise collapsed, the head of the condo association warned residents that the building’s condition had “gotten significantly worse.” The Times is collecting the stories of the victims.

The top U.S. military commander in Afghanistan said that the total withdrawal of troops could put the country on a path to civil war.

Serena Williams dropped out of Wimbledon because of a leg injury. She is one title short of the record for most majors won.

Rich Americans are likely to enjoy more greenery in their environments compared with people in lower-income communities, a trend in cities across the country. Ian Leahy and Yaryna Serkez show the depth of the contrast.

Seafood science: “Who wants to buy a Subway tuna sandwich and send it to a lab?”

Beat the heat: Douse yourself with a bucket of cold water.

No shortcuts: A (mandatory) 40-mile rite of passage for high school freshmen is back.

Lives Lived: Elizabeth Martínez helped organize the Chicana movement, which sought to empower people, like her, who were of Mexican descent and born in the United States. She died at 95.

It’s not easy being greenspeople

Though you may have never heard of the term “greenspeople,” you’ve probably seen their work. In TV shows and movies, a greensperson is responsible for the foliage you see onscreen. They can create a tropical Vietnamese jungle in the middle of a Midwestern suburb, or a wheat field out of bundles of grass. They can make a production that’s shooting in the dead of winter look like it’s during spring — and vice versa.

Spot any faux forests, fanciful estates or lush gardens in your favorite film? That’s possible thanks to greenspeople.

“It’s one of those jobs where people go, ‘Ohhh, I didn’t even know that that exists,’” Ginny Walsh, a greensperson, said. When a movie she worked on, “Meet the Parents,” wanted to shoot a fall scene in the winter, she and her crew attached fake autumn leaves, one by one, onto naked trees.

In The Times, Robert Ito went behind the scenes of sets Walsh and others have created for “The Stepford Wives,” “The Greatest Showman” and more. Check them out. — Sanam Yar, a Morning writer

Gazpacho is perfect when it is too hot to eat but you need cold, salt and lunch at the same time.

There have been many stories about young people starting bands. The British comedy “We Are Lady Parts,” streaming on Peacock, makes the format feel giddily new.

Mia Bloom and Sophie Moskalenko’s “Pastels and Pedophiles” looks at how the QAnon conspiracy theory morphed into a political movement.

“If you took the frats depicted in ’80s and ’90s college movies and gave them the technology of 2021 America, that’s basically what Nelk is.” Known for their pranks and parties, these YouTubers made backlash part of their brand.

The pangrams from yesterday’s Spelling Bee were ineptly and penitently. Here is today’s puzzle — or you can play online.

Thanks for spending part of your morning with The Times. See you tomorrow. — David

P.S. A century ago today, the Senate confirmed William Howard Taft, the ex-president, as chief justice. He remains the only person to hold both offices.

Today’s episode of “The Daily” is about the U.F.O. report. The “Ezra Klein Show” discusses why we work so much.

Claire Moses, Tom Wright-Piersanti and Sanam Yar contributed to The Morning. You can reach the team at themorning@nytimes.com.